Tilt-shift photography was made for Wes Anderson, even if he doesn't actually use it. His pictures often look like they were filmed that way, because they are exquisite miniatures. Keith Uhlich and any number of others have referred to his "shoebox-diorama" aesthetic. There's a hand-crafted feeling to his movies (too bad George Harrison already used the name "Handmade Films"), from the props and set design to the images themselves, a sense "Moonrise Kingdom" underscores with the use of Super 16mm film stock and a softly aged, yellowed visual texture. 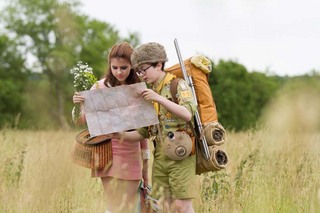 The picture begins in what appears to be a toy house with tiny people living inside -- reminiscent of the cutaway ship set in "The Live Aquatic with Steve Zissou" (or Jerry Lewis's famous construction for "Ladies' Man"). The site is New Penzance Island, 1965 -- somewhere, I would imagine, on a fantasy border between New England and France,* probably across the water from Tativille on the mainland. The postal address (clearly marked on the mailbox) is "Summer's End." The movie is obsessed with charts and maps and measurements and procedures and codes -- all those things that (supposedly, at least) help you figure out where you've been, where you are, where you need to go, and what you need to do to get there. 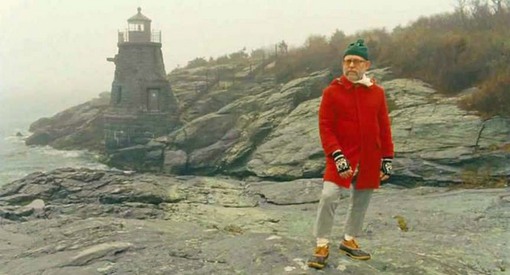 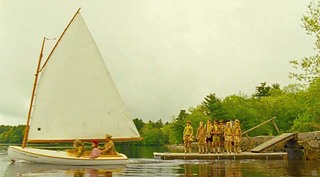 And, the narrator (Bob Balaban, looking like a grey-bearded bespectacled elf in a bright red coat, black and white mittens and a green stocking cap) tells us, looking us right in the eye, it is indeed early September, just three days before a famously ferocious and well-documented tempest, according to the U.S. Department of Inclement Weather, which keeps track of those sorts of things. I would estimate that 98 percent of the time (I wish I had a graph), Anderson's camera is situated on a tripod or a dolly, moves only at right angles, and always with clockwork smoothness. (There's a Keatonesque boat that sets sail with a similar comically pure, precise and idealized motion that I can only describe as deadpan. It's miraculously urgent and serene at the same time.) The dolly-mounted camera can move left or right, up or down, forward or back, except when it pivots (from 180 degrees to 360 degrees) from a fixed point. The compositions, as you know from "Rushmore," "The Royal Tennenbaums" and so on, are generally balanced, stable and symmetrical, as if viewed through a proscenium. Lots of straight lines and 90-degree angles; few diagonals, except as parallel lines that appear to converge in perspective.

There's a witty shot from a hilltop vantage in which a boy is chased into an open field by a flock of other boys. (Reminds me of the "War and Peace" battle scene in Woody Allen's "Love and Death.") They all go right down the center and then the boy makes an abrupt right. So, the other boys do, too -- but none of them takes the diagonal to cut him off. They make the sharp, 90-degree turn as if they were following a grid. 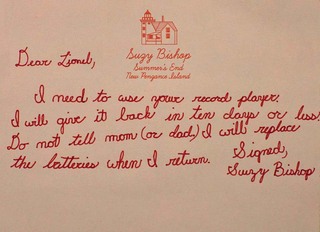 A miniaturized world, detached camerawork, symmetrical proscenium framings, a narrator who makes eye contact and would break the fourth wall if there was one: How many more distancing devices can we get? Well, the characters compartmentalize their emotional worlds through punctilious modes of communication (especially hand-written notes and letters with formalized closings, like "Signed, Suzy Bishop") and clipped, stylized speech patterns. (The policeman talks like a policeman; Social Services -- her only name -- talks like a manual from DSHS; the policeman talks like a policeman; the scoutmaster talks like a scoutmaster -- first he says he's "really" a math teacher and a scoutmaster second, but then he reverses himself in a way that's both mathematical and scoutworthy; the Bishops, both lawyers, bond through their legalese... Their language sets them off and identifies their membership in a tribe). The movie repeatedly uses split screen effects (there's that order-imposing symmetry again). And the binoculars through which Suzy Bishop (Kara Hayward) likes to look at things, because they make everything seem closer even if they aren't very far away to begin with. That's the metaphor for Anderson's style: looking close at the tiny details, but maintaining distance. The lens always separates the viewer from the view. 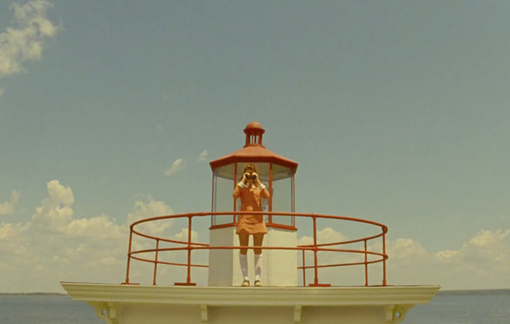 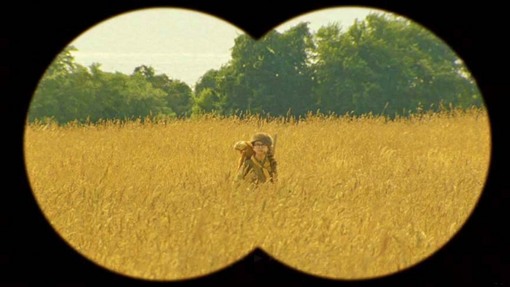 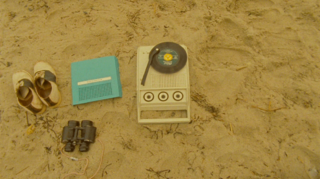 Nostalgic objects are catalogued and fetishized: a record player, a map, a pair of binoculars, a pair of lefty scissors, a pair of "Sunday school shoes," a pair of glasses, a suitcase of books, a portable record player, a French pop 45, a record of Benjamin Britten's "Young Person's Guide to the Orchestra," a small reel-to-reel tape recorder, a pair of handmade fish-hook and scarab earrings, a coonskin cap, a corncob pipe, a pen knife, a khaki uniform with symbolic patches and buttons and a piece of jewelry that is of sentimental value but that was not a badge originally intended to be worn by males... Suzy says her binocs are her "magic power" and all of these things are imbued with near-mystical significance because of their sentimental associations for the people who value them. In Andersonville, emotions are encoded into talismans, metaphors, symbols, memories. That's always been his thing, but in this age of collections, this moment of Pinterest ascendancy, it strikes a chord both modern and melancholy. Life is messy, but solid objects can be inventoried, ordered, classified, categorized in ways that make sense and have meaning, so that we can hang onto them. 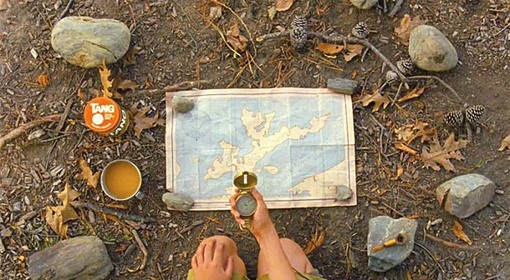 Even in the outdoors, with its messy, root-tangled pathways, and lack of straight lines (except on the horizon), "Moonrise Kingdom" sees the world as an array of specimen boxes -- not in a cold, sterile, scientific way (like, say, Stanley Kubrick), but like a kid sharing his obsessively compiled collection of treasured objects. The cultivation of collections -- I do not use the fashionably overused, pretentious word "curate" -- is something I devoutly believe in. Like the late Andrew Sarris with his scrupulously maintained movie lists, I have maintained many collections in my lifetime (fragments I have shored against my ruins) -- rocks and minerals, international postage stamps, water samples, Edward Gorey books, LPs, CDs, DVDs, vintage and foreign (especially Polish) movie posters, 1962 Seattle World's Fair souvenirs, tattoos, hot sauces, tiki mugs, Echinacea plants... I understand the emotional weight they can accrue. 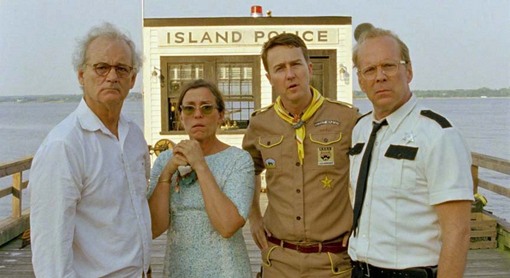 I hope you've noticed that this is not written like a review. Because it isn't. I haven't properly introduced the characters or summarized the plot, just touched on the qualities that I find especially notable or moving. I should mention that there's a rather jolting (if elliptical, and surreal) outburst of bloody (red) violence and, in its aftermath, as the characters reel in shock and their emotions come unmoored (a man throws a shoe at another!), the movie goes briefly, but not ostentatiously, handheld. But only for a minute or two. Whew.

(This is a smart and effective way to employ the shaky-cam, by the way -- like how Hitchcock always said close-ups should be used: sparingly, because they are powerful. Any intensifying, in-your-face technique can reach a point of diminishing returns and outright tedium if there's no pacing or contrast. Even the Ramones knew to keep their songs to under three minutes and change 'em up occasionally. After the chainsaw buzz of "Blitzkrieg Bop," "Beat on the Brat" and "Judy is a Punk," you gotta throw in something like "I Wanna Be Your Boyfriend" before you rev up again.) 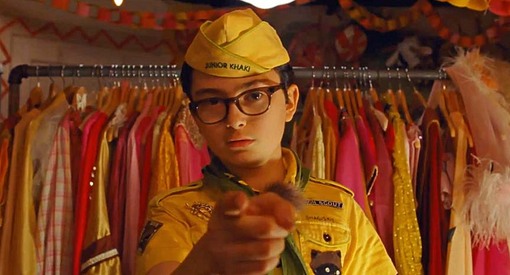 For me, the most enchanting scene in "Moonrise Kingdom" is when Sam Shakusky (Jared Gilman) slips out of a performance of Benjamin Britten's "Noye's Fludde" and sneaks backstage. Given that the show, the fantasy, is out in front, displayed for the audience, the trip behind the scenes is usually presented as a debunking or stripping away of illusion. Not here. The world Sam enters is even more "magical" than the official version onstage, and that hidden/forbidden aspect of it helps make it all the more attractive to him. In the twilight, a queue of kids dressed as pairs of animals wait to board the ark. Sam presses through a rack of costumes and finds a row of "birds" in a dressing room, facing make-up mirrors. Now he is behind the artifice behind the artifice behind the artifice... and he spots the realness of Suzy (in center frame, of course), a raven with an injured wing (a bloodied hand) from when she punched a mirror because she got mad at herself. One wounded, rebellious "troubled child" (Suzy discovers that her parents have a booklet called "Coping With the Very Troubled Child" hidden on top of the refrigerator) immediately recognizes another, and their collusion begins at that moment. 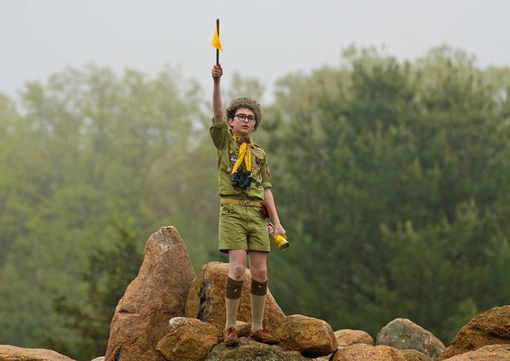 Suzy enjoys escaping into books set in otherworldly realms; Sam is more outward bound (he's a good scout, if unpopular), and they conspire to create a shared fantasy -- based on rituals, rules, ceremonies, and their own knowledge of how to do things properly, like writing a letter or pitching a tent or French kissing. Yes, it's a movie about movies, and all forms of creative collaboration and storytelling -- especially the stories we tell about or to ourselves. It's a method of survival in a hostile or indifferent world. Friendships are shared fantasies, conspiracies of affection and loyalties and imagination. So is love. And marriage. And family. And a scout troop. And a profession. Sam and Suzy set out to follow the ancient Chickchaw Indian trail on the island and reclaim it for themselves, a tribe of two. In the process, they reclaim their own lives, by linking them together. They're still kids (he's an orphan, she's got two parents and three little brothers), but they have asserted a measure of autonomy that can allow them to both live for today and hope for tomorrow. Those are the last words in the movie: "See you tomorrow." 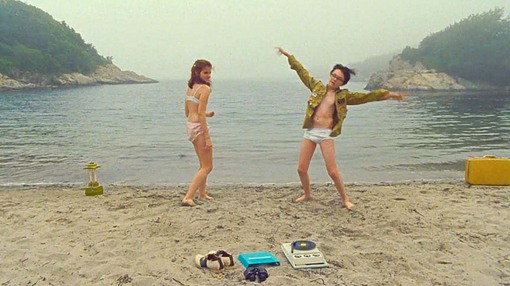 * On the beach, all it takes is a record player, a 45 of a French dance tune, and two kids in their underwear (their clothes were wet because they jumped into the bay) to create a romantic scene that's part "From Here to Eternity" (standing up), part young Godard and part "Beach Blanket Bingo."