Up close and personal: The Close-Up Blog-a-thon 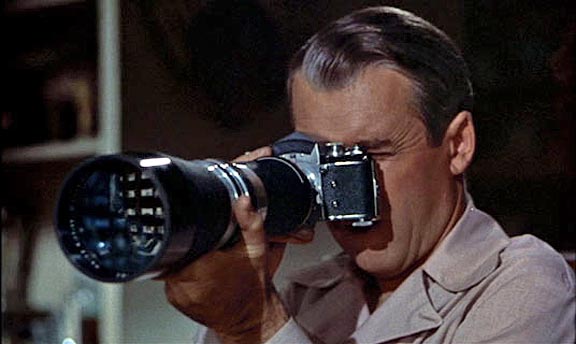 What're you lookin' at?

Now playing, October 12 - 21 at The House Next Door: The Close-Up Blog-a-thon! House publisher Matt Zoller Seitz had this great idea:

Your piece could be as simple as a series of frame grabs with captions, or a blurb about a single close-up in a particular movie or television episode, past or current. Or it could be an essay about a certain performer's mastery of (or failure to master) the close-up.... Or your piece could fixate on a director or cinematographer who is especially adept at pushing in to capture emotion. Or if you're feeling contrarian, you could write about a memorable close-up that does not show a human face. Dealer's choice all the way.

Advertisement
So, I don't know what I'm going to write about quite yet (probably more than one thing), but thinking about it today triggered a recollection of something Alfred Hitchcock had said about the impact and intimacy of close-ups, and how they should not be used indiscriminately. They are the bazookas in a filmmaker's arsenal. ("Amongst our weaponry are such diverse elements as... close-ups!") 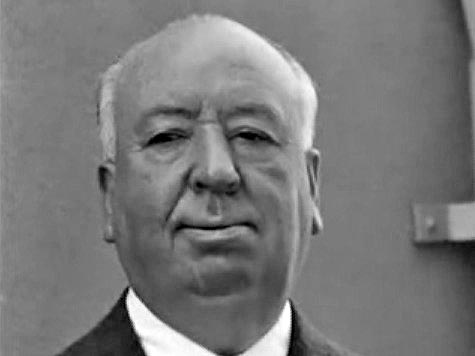 Kindly old man or dirty old man? Or both?

Hitchcock also liked to talk about how context gave meaning to close-ups, a compositional and editorial principle he liked to cite as an illustration of "pure cinematics" (but which also goes by the less exalted name of "montage," a basic element of film grammar). He told Francois Truffaut (in the interviews collected and printed in "Hitchcock/Truffaut" -- or is it "Truffaut/Hitchcock"?): "Let's take a close-up of "Rear Window" (1954) star James Stewart looking out of the window at a little dog that's being lowered in a basket. Back to Stewart, who has a kindly smile. But if in the place of the little dog you show a half-naked girl exercising in front of her open window, and you go back to a smiling Stewart again, this time he's seen as a dirty old man!"

Here's a clip of Hitch explaining it all for you -- and playing the lead role in a custom-made example:

What he's describing is, of course, the famous Kuleshov effect, which... oh, let Mr. Wiki provide the details: 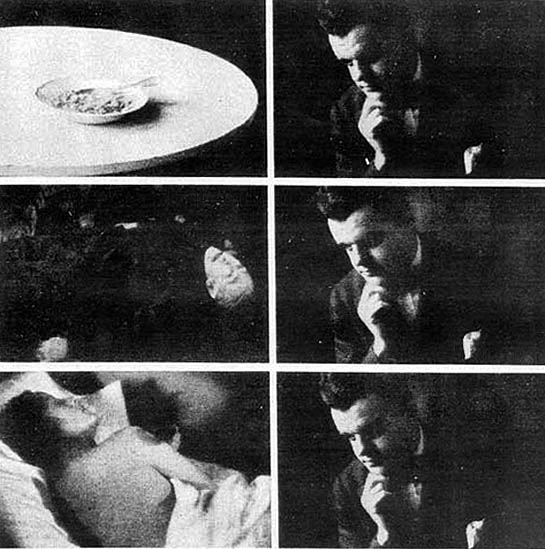 The Kuleshov effect in six shots. Or four.

The Kuleshov Effect is a montage effect demonstrated by Russian filmmaker Lev Kuleshov in about 1918.

Kuleshov edited a short film in which shots of the face of Ivan Mozzhukhin (a Tsarist matinee idol) are alternated with various other shots (a plate of soup, a girl, an old woman's coffin). The film was shown to an audience who believed that the expression on Mozzhukhin's face was different each time he appeared, depending on whether he was "looking at" the plate of soup, the girl, or the coffin, showing an expression of hunger, desire or grief respectively. Actually the footage of Mozzhukhin was identical, and rather expressionless, every time it appeared. Vsevolod Pudovkin (who later claimed to have been the co-creator of the experiment) described in 1929 how the audience "raved about the acting.... the heavy pensiveness of his mood over the forgotten soup, were touched and moved by the deep sorrow with which he looked on the dead woman, and admired the light, happy smile with which he surveyed the girl at play. But we knew that in all three cases the face was exactly the same."

So, there you go. Get closer. Check out the Close-Up Blog-a-thon and submit your own ideas. I've got to focus in on mine...