Margot goes round in circles 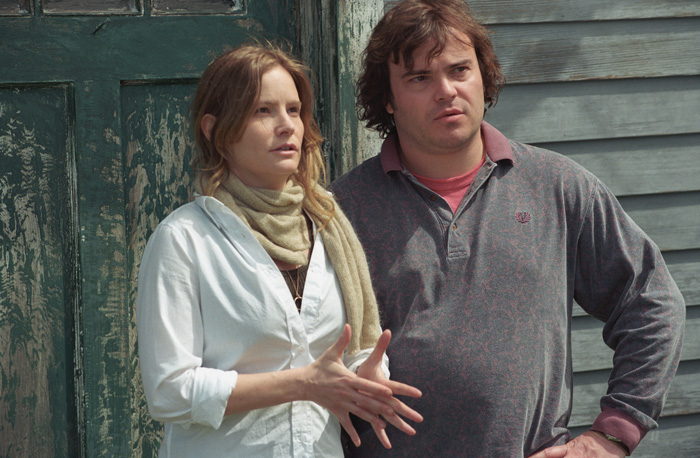 Jennifer Jason Leigh and Jack Black in "Margot at the Wedding." No relation. Well, OK, Leigh is married to the writer-director, but that's not to invite speculation.

The logic that structures Dennis Lim's New York Times interview with Noah Baumbach ("The Squid and the Whale" (2005), "Margot at the Wedding") is circularly inspired:

[In the film,] Margot, a fiction writer in the throes of a personal crisis, is at a bookstore appearance, which goes quickly awry when her interviewer presses her on the connections between her life and her work. He brings up a story of hers that concerns an abusive patriarch. She immediately begins to defend her father. He interrupts: What he meant to ask was whether she had based that monstrous figure on herself.

“I wrote that scene in response to the interviews I did when ‘Squid’ came out,” Mr. Baumbach said.... “I was having fun with what people assume when they think something is autobiographical.” [...]

“Someone would ask me if something was true, and I’d say no, and then they’d ask me a follow-up question under the assumption that it was true,” he said. “ [...]

“Margot is me at my worst, probably,” Mr. Baumbach said. “I try not to analyze the characters when I’m writing, but I’m very analytical in my life.” [...]

With Mr. Baumbach the conversation has a way of circling back to autobiography — or, more precisely, to the notion of a writer creating autobiographical work by feeding on family and friends for material. It’s a recurring motif in his films. [...]

“My hope is that I will make enough movies that they can’t all conceivably be autobiographical.”

Advertisement
OK, let me take that for one more spin around the block. After seeing "Margot at the Wedding" in Toronto ("The Eastern Inbred Class"), I wanted to address this inbred motif in the reflexive manner of Baumbach's film: "If I were a character from the movie critiquing the movie, I would probably say something like: "Noah Baumbach must really detest his dreadful dysfunctional family.'"

...not only because one of the movie's subjects is the way writers autopsy and cannibalize the people in their lives for their fiction, but also because each and every knife-twisting line is so toxic and cutting, so astonishingly self-serving, that you figure somebody just had to have actually said it, or thought it, or attributed it to somebody else in a snarky piece of gossip disguised as a revealing psychological insight disguised as an expression of sincere concern. In other words, the way these people talk and behave seems too awful not to be true.

"Well," says one published author in the film, "we all take from life." The difference is that, by this point in the movie, I assume her [Margot's] work is probably terrible, simultaneously pitiless and self-pitying, relentlessly "honest" and utter bullshit. (See the character of Briony in "Atonement.") Baumbach himself, however, is an exceptionally keen writer and observer of the stifling Upper-East-class milieu in which he was raised. (Both his parents are writers and -- ouch -- film critics.) Which doesn't mean his movie has anything to do with them. But a littérateur in the film observes that the character of the father in another's story is loathsome but strangely sympathetic. You could say the same thing about nearly any character in "Margot at the Wedding." Just leave out the "sympathetic." In fact, just about anything you can say about this movie has already been addressed (and ridiculed) in this movie.