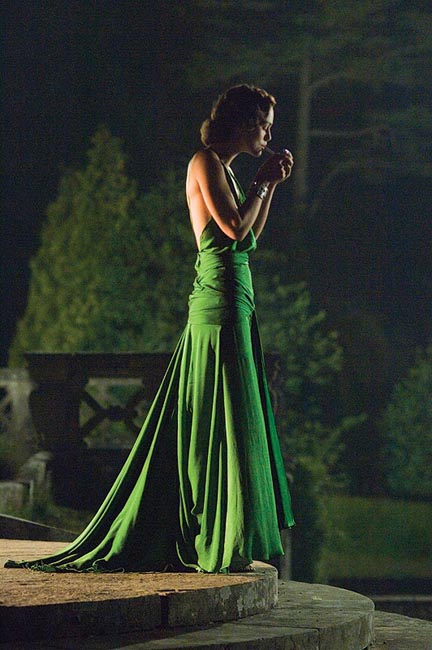 I have a question about these kinds of dresses: Are they meant to be worn more than once? Don't they get dirty and wear out pretty fast, dragging around on the ground like that?

My dog ate the book. Well, not really, but when I was about 200+ pages into Ian McEwan's 350-page "Atonement," my copy somehow disappeared. I found it weeks later, in a dark corner under the bed, and by then was already on to something else. I put it aside, intending to pick it up again soon, but the next thing I knew months had gone by and I was on my way to the Toronto Film Festival where a movie called "Atonement" was being screened.

While watching Joe Wright's intensely cinematic interpretation of McEwan's book (co-executive-produced by McEwan and written by Christopher Hampton, best known for adapting "Dangerous Liaisons," "The Honorary Consul"/"Beyond the Limit," "The Quiet American," "The Good Father"), I kept wondering how far into the story I had actually read. Every once in a while something would happen and my memories of the book would snap into place. But by the end (actually, by the point Robbie reaches the beach and goes for a drink), I had lost any literary moorings and was completely immersed in the movie.

Actually, I was immersed in the movie from the beginning: a shot that follows a parade of toys on a little girl's bedroom floor to the desk where she sits before a typewriter, composing her first play, "The Trials of Arabella." Using a typewriter as a musical instrument in the score may sound a bit precious, but it works cleverly and hauntingly in "Atonement," the story of a 13-year-old girl -- an aspiring writer -- who enlists her extended family in her imaginative productions... with, as they say, disastrous results. Her "ruthless innocence" (in a phrase used, I believe, by Kathleen Murphy) spurs her to miscast the roles in a melodramatic fantasy-scenario that's beyond her understanding. And yet, once she imagines it, she sticks to her story, and crushes lives with her godlike (author-like) will. 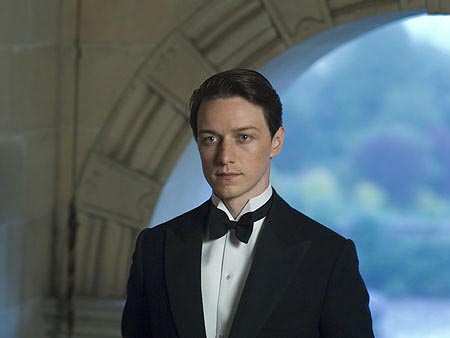 This is the story of the uncomprehending gaze of pretty blonde Briony Tallis, how she fixes her subjects like insects pinned to a board -- as in a repeated shot of her cold blue stare through a windowpane. She frames a scene in her imagination and fits it into a false outline of events. The moment is stunning in the true sense of the word -- but among the many things Briony doesn't realize at the time is that she is freezing her 13-year-old self in the same instant. She determines the consequences of what she has witnessed, and what she has imagined, and in those moments has locked herself into her own existential coffin. For the rest of her life, no matter what she does (or writes), she will never be anything but that 13-year-old girl, stuck in the past.

"Atonement" is an intelligently, evocatively directed movie in every aspect, from the adoring ways in which the romantic leads are photographed (who would have thought James McAvoy could be filmed as gorgeously and lovingly as Keira Knightly?), to a long take along the shore at Dunkirk that is one of the most complex and emotionally shattering single shots in movies.

I don't want to say much more now, until we can have a more detailed discussion about the last ten minutes or so. But as I wrote in a comment earlier, I wasn't sure the 2,000 or so people at the public screening in Toronto's grand old Elgin Theater were reading the ending the way I did. When I got home, I delved into the epilogue of the book (it gives nothing away to say it's set in "London, 1999") and discovered that Hampton and Wright had conceived an impressively cinematic way to transform what is, almost by definition, a thoroughly literary conceit. I think the ending of the book is even more devastating than the film's. But let me say this much: It's based on a moral tale by Ian McEwan, the man who wrote "Enduring Love," a book (and a fine movie) with a similarly ambiguous title. "Atonement" may describe its subject as acutely as "Do the Right Thing" describes what Spike Lee's movie is about....