The other night, I had dinner with some film-critic friends -- people I've known for much or most of my life -- and the subject circled around to 2010 ten-best list obligations. Two of us immediately said we'd rank episodes of "Mad Men" on our lists. I did not see (m)any theatrically released motion pictures this year that I thought were superior to, say, "The Rejected," "The Suitcase," "The Beautiful Girls," "Tomorrowland"... In fact, out of the 13 episodes shown between July and October, I could list ten titles and not feel terribly guilty about the feature films I'd be leaving off.

This video essay, "The Ladies and the Boxes," draws upon several episodes from Season 4, culminating with the final one, "Tomorrowland." Sally Draper says she gets upset when she thinks about "forever" -- the concept of death that most troubles her, but also the promise (if not the reality) of marriage. Sitting outdoors in a vacant lot, with the remnants of a old, overgrown shed behind her -- as unlike the rigid, rectilinear architecture of SCDP as possible -- she likens it to the Indian girl on the Land o' Lakes butter box, holding a box with her picture on it, holding a box...

As we've discussed before, "Mad Men" is very much a movie about modern geometry, about the boxes and compartments people occupy (the low-angle shots consistently emphasizing the lids, as well as the walls, doors and windows), the frames they create around themselves and one another: family, sex, romance, work... houses, offices, apartments, motels, beds... past, present and future..."The Ladies and the Boxes" is mostly about the boxes Don creates for Sally, Megan and Faye -- and how the ladies fit or don't fit into them. Or, in Sally's case, how she struggles to escape some and pull her father into others. Notice, too, the presence of Megan (and, to a lesser extent, Faye) in the backgrounds of so many of these shots, as if just waiting to be noticed and to take her place in a two-shot with Don. Unlike Faye, who can be seen holding her own in the frame with Don (even with Megan between them in the background), Megan is rarely shown in the same shot as Don unless she (or in one notable case he) is in the background and/or out of focus. But by the time Don says he's in love with Megan and thinks he has been for a while, we realize the mise-en-scene has been telling us that for weeks, rejecting Faye and embracing Megan, long before the feelings consciously registered with him and he presented Megan with... a box. (A box from the past that represents the future.)

Sally, the confused girl coping with her parents' divorce and her own emerging sexuality, is the connection, as if Don is channeling his love for his daughter through her to Megan. Watching Don watch Megan, and Sally with Megan, is one of the great pleasures of this "Mad Men" season. Megan surprises and delights him with her quick thinking and emotional maturity again and again. (Notice how deftly and simply she handles the Miss Blankenship question -- neither too much nor too little information.) Several times in "Tomorrowland," Don stands and watches his kids with Megan -- in the motel room during the French song, by the pool, in the restaurant booth -- imagining the possibilities for this new family. Could this be it? Faye, in contrast, is stiff and unnatural, more like a professional version of Betty. (Also: Both Megan and Faye seem to take turns dressing in yellow/gold, dark blue and sea-foam green, as if they were auditioning for the same role in Don's life -- but only Faye is seen in black-and-white patterns, as if to emphasize her mixed positive and negative qualities as far as Don is concerned.)

I've intercut three bedroom scenes from "Tomorrowland": between Faye and Don in Don's apartment at the very beginning of the episode; between Megan and Don in the California motel; and the proposal in Don's apartment after the return from the trip. These three scenes seem to flow into and out of one another, all extensions of the same conversation, and the blocking is significant: In the first, Faye sits fully dressed for work on the edge of the bed; in the California scene, Megan and Don lie side by side; and it the proposal scene, Don takes Faye's place, fully dressed for work on the side of the bed. (Notice the brief matching dissolve I inserted of Don in the motel, after returning from Anna's house, when he decides to go back out and join his family -- including makeshift nanny Megan -- in the pool. It's the same position he takes before taking another dive into the deep end with Megan, and that's the core of Don's emotional story here, trying on several levels to bridge worlds in California and New York.) 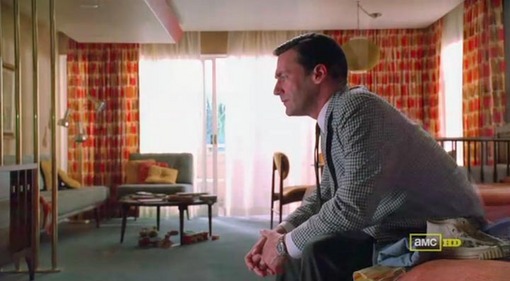 "Tomorrowland" is also built around the packing up of two old houses: Anna's (where Don and his kids appear framed in the doorway like a family photo, and where he receives Anna's wedding ring as an heirloom) and the old Draper household in which (in the season's penultimate shot) Don and Betty exit the kitchen in opposite directions, she with a box under her arm.

The music in this essay is mostly from "I Got You Babe," the 1965 Sonny & Cher hit that ironically ends "Tomorrowland," and Season 4, as Don once again lies awake in bed with Megan, and looks out the window toward... tomorrow. I've used other romantic Southern California movie-music tune to (again, semi-ironically) emphasize the dreamlike movieness, the sunlit/moonlit perfection, of the trip, and if you don't recognize it at first, that's even better. After creeping onto the soundtrack a few times, it finally breaks over into its familiar melody at the properly delayed moment.

Previously this season, I've devoted video and/or written essays to "The Rejected," "Beautiful Girls" and "Tomorrowland." I hope this eight-and-a-half-minute montage will supplement those, and bounce around some resonant moments off one another.

As for Peggy Olson, she deserves a movie of her own. And I'm inclined to make one for her...