Mad Men: How to direct an action sequence

A few images from last week's "Mad Men" (or, as I often think of it, "The Peggy Olson Show Featuring Don Draper") to illustrate why composition and framing (aspects of what you might call cinematic architecture) make a world of difference in how a scene works... or doesn't. This episode, "The Rejected," was directed by John Slattery (who, as Roger Sterling, perfectly accents the new office design) and photographed as usual by Christopher Manley (overseen, of course, by series creator Matthew Weiner). Captions appear beneath the frame grabs below:

Don Draper (Jon Hamm) is falling apart, and the first shot shows him tethered to a phone cord, chain smoking, backed into a corner, with the ceiling closing in on him (as ceilings often do on "Mad Men"). The sight of Don compulsively puffing, lighting one smoke with the butt of another (he's on the phone with the notorious Lee Garner [Darren Pettie] from Lucky Strike, Sterling Cooper Draper Price's most financially important, and asshole-ish, client) is just the opposite of the way you would expect the well-groomed star of a TV series would be introduced -- especially in 1965. It turns out the subject of the call has to do with both cigarettes and television: the new FCC regulations for advertising cigarettes on TV. There's a delayed punchline a few shots later, when Don explains to Lee that certain camera angles are also prohibited -- like low angles or wide lenses, "anything that makes the smoker appear super-human." Yeah, we've seen that at work. 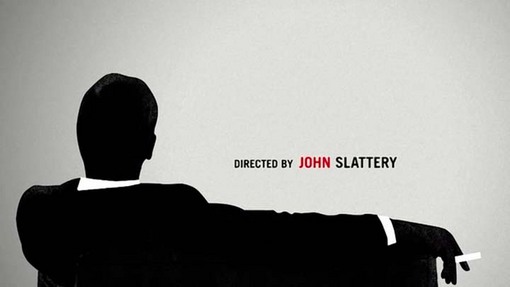 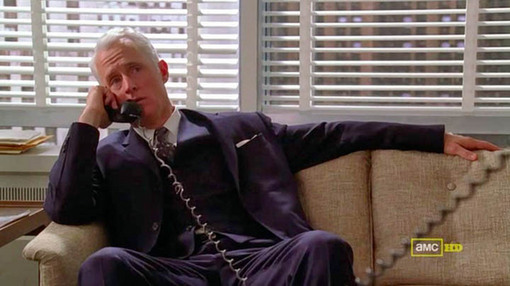 The second shot (cleverly mimicking the signature image of the series' title sequence -- only two shots and a few seconds before -- shows the episode's director in character as Roger Sterling, obviously participating in the same call. His body is canted in line with the cord from the phone he's holding... but what's on the end of that other diagonal cord? 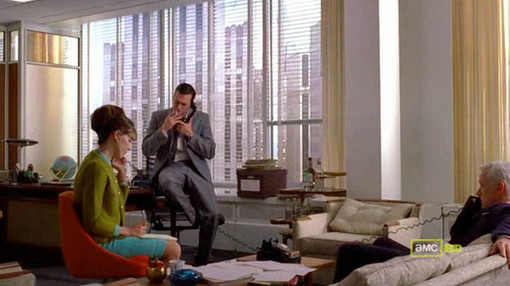 The third shot is the master, which reveals Don perched on the edge of his desk (hence the low angle of the opening shot), Roger on the couch, and Allison (Alexa Alemanni) listening in and taking notes on a mute extension attached to the phone Roger is using.

From this moment on, what we have might be considered an action sequence, with the camera stationary and the action taking place in a single room. Most of today's action filmmakers could learn a thing or two from how the action is framed and directed so that the viewer is given subtle spatial cues (sometimes nearly subliminal ones, though they register in your brain) in almost every shot. No routine over-the-shoulder reverse-angle set-ups here. The style is vintage Hollywood (the understanding of which is one of the series' visual strengths), made unusually exciting with a few subtle touches. 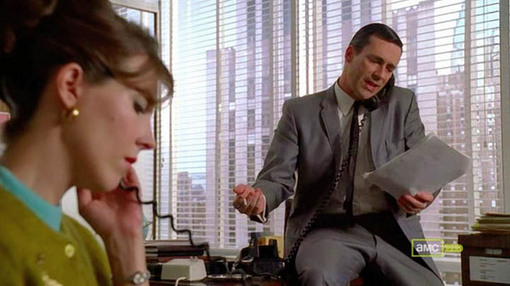 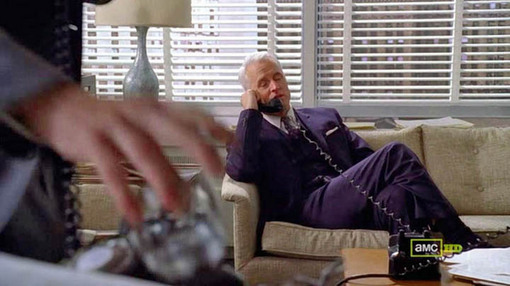 One technique featured in this episode is to begin a shot with something in the foreground, on the edges of the frame, and then quickly remove it, which helps establish 3D coordinates. Allison may appear on the left, out of focus, then disappear as the camera pans with Don's move toward the bar; Don's hand may grab his drink off his desk without the camera (which remains focused on Roger and Allison in the background) even seeming to notice. But your eyes register the information, and you immediately get your bearings. (Why, he asks rhetorically, is this so hard for post-"Top Gun" filmmakers to grasp when they want to create tension during a chase sequence?) 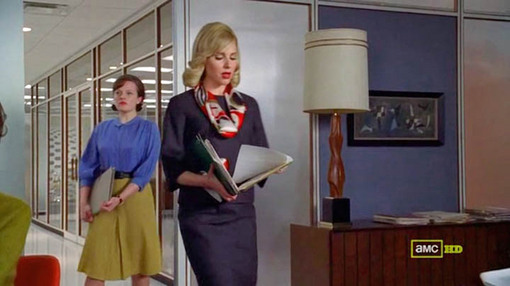 At one point, this office "action sequence" (its tempo largely driven by the unseen, unheard fourth party on the phone) accommodates two more participants, when Peggy (Elisabeth Moss) and Faye (Cara Buono) enter through Don's open doorway (notice just a sliver of Allison's shoulder holding down the left edge of the frame), like two more vehicles pulling into an already crowded intersection. Six people (one off-screen), multiple conversations, one room. Don greets them with an ironic put-down ("Either of you ladies bring any ice with you?") that's indirectly aimed at Allison, too (she hasn't kept up with his thirst when re-stocking the bar that's positioned in the center of the full-room shots). Is that a reflection of the artwork in Roger's office behind Peggy? 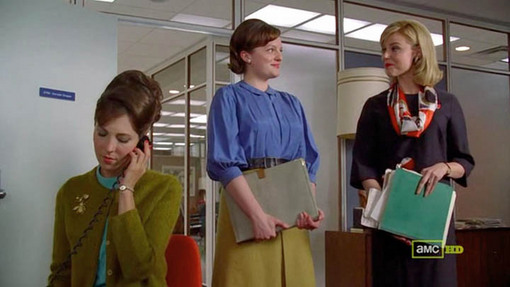 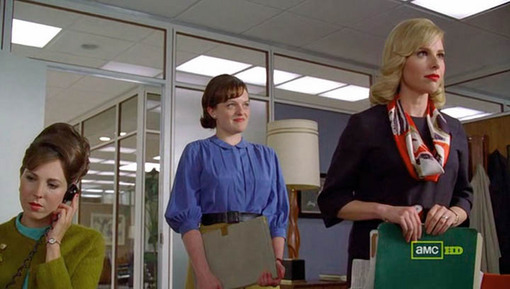 The three women are generally grouped into one segregated shot (with Allison, in the low position, as the constant visual reminder that the phone call is still going on) -- first in a fairly straight row, then in a receding diagonal (with the hallway stretching further behind them) as Faye steps forward to ask if she can borrow Allison for her focus group.

It's beautiful stuff, watching the figures in the room move into their positions, like a revolving mobile that's been directed. Shot for shot, it's thrilling moviemaking. My friend film critic Kathleen Murphy said, in a long conversation we had about the episode after my "Architecture of Mad Men" video essay last week, "If I had to bet, I'd say they (Slattery and/or Manley and Weiner) had been watching Sirk, Pakula and Fassbinder." (Take a look at, for example, "All That Heaven Allows," "Klute" and "Ali -- Fear Eats the Soul" or "The Bitter Tears of Petra von Kant" and you'll see what she means.) 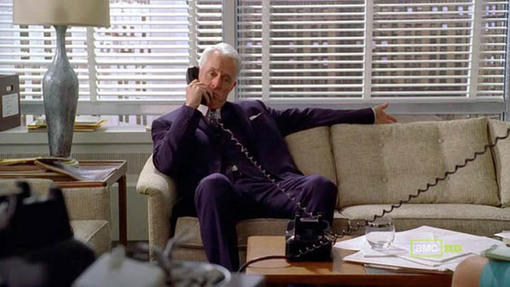 Above is one of many shots in the episode that made me smile, after Roger, who has excused himself to confer with Pete and Lane in the hallway, is called back into the room. Only Roger appears onscreen, right there in the center, but all four parties to the conversation are represented: Don's ashtray and phone (off the hook, out of focus, in the left foreground), Lee (pick your phone/cord), and Allison (cord angling right, and skirted knee just barely visible in the lower right corner). Again: action directors/storyboarders, take note. 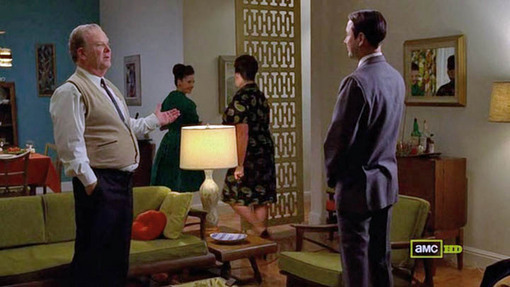 The same technique is used in the smashing scene between Pete (Vincent Kartheiser) and his father-in-law, Tom Vogel (Joe O'Connor), back in his and Trudy's (Alison Brie) apartment. What we're seeing here, with Pete moving to the well-stocked bar under the mirror in the center of the frame, is the junior executive learning to out-Draper Don Draper. As I noted previously, the series in general, and this episode in particular, is about various forms of compartmentalization. At work, Pete is stuck in a cubby-hole office in which the doorway is obstructed by posts. Here, Pete finally learns to master the mise-en-scene -- using the happy news of Trudy's pregnancy, and Tom's premature slip of the tongue about it, to turn a potential setback (having to drop the Clearasil account) into a bid for the rest of his father-in-law's Vick's business.

Pete sends Trudy off to show her mom Jeannie (Sheila Shaw) what they have planned for "the maid's room," so he and Tom can talk business, man to man.... 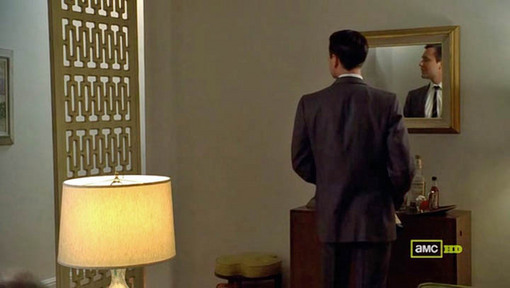 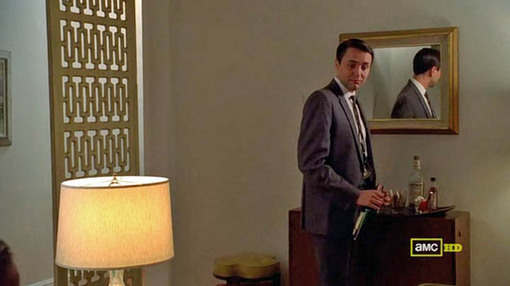 After the matter is settled, Pete goes to pour the men a drink, then calls off-screen (through the decorative screen/room divider, in fact): "Trudy, do we have any ice?" -- recalling, of course, Don's question to Peggy and Faye. Way, way over in the lower left corner, Tom sits down. Reverse angle on Tom, who looks at Pete and realizes (grudgingly? appreciatively? all of the above?) how he's been played: "You son of a bitch." Pete turns and, matter-of-factly, shrugs. That's a bingo!

It's a cliche to say that every frame of a film is "suitable for framing," but it's true for "The Rejected." And suitable for compositional analysis and appreciation, too.

(Thanks to David Bordwell and Kristin Thompson for... well just for being them.)