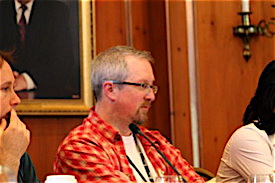 What was I thinking?

David Poland sent me this funny picture (of me) that he took during a panel discussion at Roger Ebert's Overlooked Film Festival in May, called "Not Playing at a Theatre Near You." It is clear that I was lost in thought. What was I thinking? I'm pretty sure it was either: "How can I get more coffee here right now?" or "We'd better stop fussing about how 'superior' the 'big-screen theatrical experience' is and just accept the reality that: 1) more people watch more movies on smaller screens (even big HDTV ones) than go to theaters, in part because home screens and sound systems have improved, while audience etiquette and other aspects of the theatrical experience have deteriorated; 2) theatrical exhibition should be seen as a luxury, not a necessity, since economics prevent many of the best movies being made nowadays from getting the wildly expensive full theatrical release treatment; 3) even critics who tout 'the big-screen experience' often don't see movies on big theater screens, or with audiences; they see them in small screening rooms with a handful of other critics, where the screens aren't appreciably bigger than my 55-inch Sony HDTV -- which, from where I sit, is about the size (and clarity) of your average movie screen to someone sitting in the back half of the auditorium; 4) there's nothing wrong -- or necessarily aesthetically inferior -- about watching movies on a video screen (particularly a rear-projection one, which uses a xenon lamp not unlike a movie projector) in a comfortable room at home, and DVDs are far superior in quality to most of the beat-up 35mm art house prints and 16mm nontheatrical prints (many of them multi-generational dupes) with which those of us who grew up as cinephiles in the '60s and '70s had to content ourselves; 5) there should be nothing shameful about 'straight-to-DVD' releases; that's a perfectly legitimate, and realistic, distribution strategy for the world we live in."

Yes, I'm pretty sure it was that second thing I was thinking about. Because I seem to recall saying it out loud.

I was reminded of this when I came upon girish's provocative posting about "Theater vs. Home" at his always-insightful and stimulating blog:

It is of course a happy truism that watching a movie in a theater is the inarguably ideal way to experience it. For a movie-lover, the theater is a sort of temple, and the experience touched with religiosity. You look up in hushed awe at the screen—in contrast, you look down at a TV screen, as Godard once noted—and the darkness dispatches all distraction, leaving only the light and sound emanating from the screen.

And then there’s the enveloping scale of the image, which you can regulate in relative terms by sitting closer or farther away from the screen. Cinephiles often have their favorite rows and vantage points (when I’m alone: usually fourth or fifth row center; when I’m with others: based upon a process of grumbling and negotiation). Most of all, you relinquish control over the movie by submitting to its (unbroken and continuous) terms, accepting its rules of temporality.

And yet, and yet….there’s a part of me that sees this hushed, worshipful submission to the terms dictated by the work of art as….a tad stifling.

Here’s one thing I believe with all my heart: art is meant for use. For use in our daily lives, to be incorporated and integrated into the very fiber and fabric of our quotidian existence. Home viewing can allow this to happen in slightly unique and different ways from theatrical viewing.

I like the “impurity" of the home video experience—the way you can enter the work in new, unfamiliar and changeable ways, interactively, both as a whole and in fragments, disrupting unity and linearity, developing an intimacy with it, committing aspects of it to memory, and thus making use of the work and making it part of yourself in fresh ways.

I'm generally a third- or fourth-row moviegoer, myself. I used to like to sit up close because I liked to see the texture of the emulsion, the feel of an impending dissolve when the film got grainier -- stuff like that. But new technology has pretty much done away with that virtually tactile aspect of watching film. (At least the changeover marks are usually still there -- even though almost all theaters these days build up features, trailers and ads on one big automated platter system, so there are no changeovers.)

Certainly, for film critics, video is manna from heaven. You know, we have a whole generation of film scholarship riddled with errors because of (understandably) faulty observations of movies based on memories of theatrical showings. We have critics writing about things they thought they saw, but that aren't actually in the films they're writing about. (Of course, this still happens to some extent with reviews of new films, but at least those films are somewhat fresh in the mind -- not memories from months or years ago.) Today, for the first time, people studying film actually have the "texts" themselves available for close examination. Can you imagine having to write about literature without being able to go back and look at the precise way that a sentence is phrased, or a paragraph constructed? That's the situation film scholars were in for decades.

One thing I've found most energizing and exciting about my whole Opening Shots Project has been the process of looking closely at individual shots (on DVD, on my PowerBook) repeatedly, and pulling frames for the purpose of critical illustration. It's like crawling inside the movies to see how they work -- and some of these opening shots contain whole worlds within themselves. I've never appreciated the artistry of the cinema more than with this hands-on approach. The images lose no "magic" for me when I examine them so closely, running them back and forth, in slow motion, or even frame by frame. All the magic is there, in the frames themselves!

There's no denying that sitting down and watching a movie, uninterrupted (by the telephone, or the need to go to the bathroom, or a trip to the kitchen or the concessions stand) is its own kind of experience. But, of course, it's not restricted to theatrical viewing. I often sit down, turn off the phone (and the lights) and watch a movie straight through. Although, if I do have hunger pangs or a need to empty my bladder, I can pause the movie so I don't miss anything while I'm gone. Trying to watch a movie in the theater (with people chatting, coming and going, cell phones ringing, etc.) can be more distracting than watching a movie at home. Of course, you deprive yourself of the communal experience of seeing something with an audience, but I'm not convinced that's always such a bad thing.

Filmmakers themselves, of course, don't sit and watch their movies continuously, from beginning to end, while they're making them. They look at little pieces over and over and over. What's wrong with looking at a movie the way its makers do, so that you can examine the little decisions that went into constructing it? I'm not saying people shouldn't watch the movie from start to finish first ("as it was intended" -- whether in a theater or on a home screen), but part of the joy of the digital age is that we can find new, more fruitful ways of enjoying and appreciating filmmakers' work.

I have this weird daily breakfast ritual. I'll feed the doggie, make myself a bowl of cereal and fruit, and over breakfast, I'll pop in, randomly, a DVD into the laptop and watch a random ("shuffled") couple of chapters. I appreciate how this takes away the need to experience the work as a unified whole, and the need to follow a traditional "path" through the movie (anchored by plot and narrative, for example). Wrenching the segments from the movie's normal context allows small and (ostensibly) peripheral details to often rise to the surface. It's a tiny ritual, a small thing, but I look forward to it each morning. (And of course, I always pick a movie I've already seen before.)