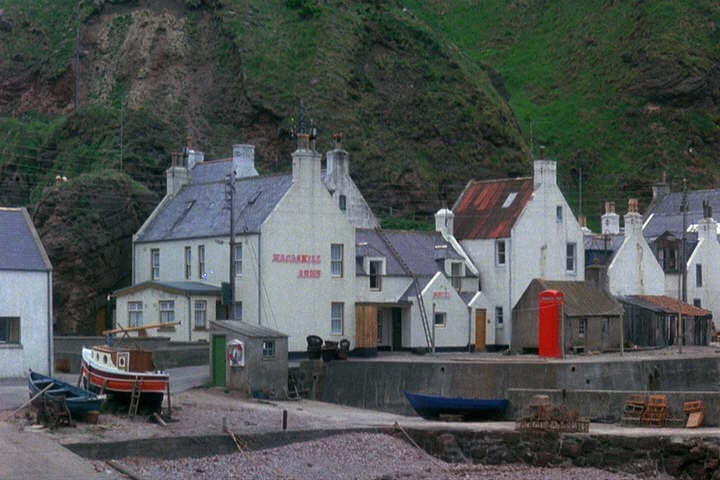 The most famous phone box in the world.

After the screening of Bill Forsyth's long-unavailable masterpiece "Housekeeping" at Ebertfest (about which more later) somebody asked him why he used the word "moving" in a key piece of dialog rather than novelist Marilynne Robinson's word-of-choice, "drifting." Forsyth said he didn't remember for certain, but imagined it was because "drifting" was simply "too on-the-nose," too "poetic" sounding. Actress Christine Lahti, who played the character speaking the line in question, and who joined Forsyth on stage (neither of them having seen the movie, or each other, for 21 years) confirmed that "drifting" works beautifully on the page of a novel, but wouldn't have sounded right if spoken aloud on the screen. So much artistry is reflected in that simple explanation. What seemed at first like kind of a dumb, nit-picky question was justified by the answer.

Forsyth spun another tale of adaptation that mirrored the oblique and inevitable comic structure of one of his movies:

He loved Robinson's book so much, he said, that he had a devil of a time trying to fashion it into a screenplay. Finally, he decided to simply take a copy of the book and start cutting pieces out of it that he wanted to use, dividing them up into categories like "narration," "action," "dialog," etc. He put them in separate envelopes... and realized that every time he cut a page he destroyed what was on the other side, so he had to go out and buy another copy of the book to cut things from the other side. Maybe you had to be there, but his timing and his Scottish brogue made the anecdote priceless. Just as he does in his movies, he lets the audience get a little ahead of the characters, then acknowledges what the viewers, and the characters in the movie, have been thinking. Like the moment in "Housekeeping" where Sylvie blithely walks across a bridge over Fingerbone Lake... Or some ladies from church come to visit and see stacks of newspapers all over the house. (No, I'm not going to mention the "punch-line" in either case. Just remember 'em.)

David Bordwell has another marvelous Forsyth anecdote from a personal conversation he had with the filmmaker. You'll find this and other Ebertfest coverage (including an extended treatment of the opening night film, "Hamlet") at the invaluable Bordwell-Thompson blog:

Forsyth talked as well about the final shot, one of the most satisfying I’ve ever seen. The original cut ended with Mac returning to his Houston apartment and staring out at the dark urban landscape—beautiful in its own way, but very different from the majesty of the Scottish shore. There the original film ended, but the Warners executives, although liking the film, wanted a more upbeat ending. Couldn’t the hero go back to Scotland and find happiness, you know, like in Brigadoon? They even offered money for a reshoot to provide a happy wrapup. Forsyth didn’t want that, of course, but he had less than a day to find an ending.

The movie makes a running gag of the red phone booth through which Mac communicates with Houston. Forsyth remembered that he had a tail-end of a long shot of the town, with the booth standing out sharply. He had just enough footage for a fairly lengthy shot. So he decided to end the film with that image, and he simply added the sound of the phone ringing.

With this ending, the audience gets to be smart and hopeful. We realize that our displaced local hero is phoning the town he loves, and perhaps he will announce his return. This final grace note provides a lilt that the grim ending would not. Sometimes, you want to thank the suits—not for their bloody-mindedness, but for the occasions when their formulaic demands give the filmmaker a chance to rediscover fresh and felicitous possibilities in the material.