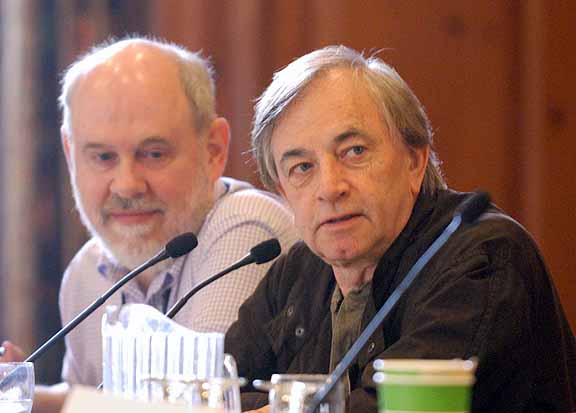 David Bordwell and Bill Forsyth on an Ebertfest panel. (photy by Thompson McClellan)

My Ebertfest has already been made for me because I spoke to Bill Forsyth yesterday and, at one point, he said "Great." This is major -- particularly for a guy who, with his friends, went around saying "Great" in Gordon John Sinclair's Scottish accent from "Gregory's Girl" for years. It's a well-known fact. Bella, bella.

In honor of tomorrow's Ebertfest screening I went back and dug up my original 1987 review of Forsyth's "Housekeeping" -- which was the #1 film on my Ten Best list that year (along with such films as John Huston's "The Dead," Tim Hunter's "River's Edge," Alain Cavalier's "Therese" and John Boorman's "Hope and Glory"):

Ruthie (Sara Walker) and Lucille (Andrea Burchill) are skating on thin ice. The orphaned sisters, now going through a gawky teen-age phase, spin silently in circles on the frozen surface of Fingerbone Lake. In the distance, a cluster of laughing children and barking dogs play rambunctiously, but Ruthie and Lucille keep to themselves. They don't like the noise.

This image, slipped into Bill Forsyth's austere "Housekeeping," is as subtle and powerful an evocation of loneliness as the movies have ever given us. Ruthie and Lucille are chilled to the soul with an unshakable melancholy, as though the cold water of Fingerbone Lake itself had somehow seeped under their skins, pooling in the pits of their stomachs.

The lake is a part of their heritage: This is the same body of water into which their grandfather, a railroad engineer, perished years before when his locomotive plunged from the tracks. The train and its passengers vanished into the depths, leaving behind nothing but a hole in the ice and, bobbing on the surface, three absurdly, almost maddeningly trivial items: "a suitcase, a seat cushion and a lettuce," as the legend has it.

Ruthie and Lucille are alone; their closest relatives are united at the bottom of Fingerbone Lake. And so, the girls long for that sense of community that most families take for granted.

Then, one crisp Northwestern morning, their late mother's itinerant sister Sylvie (Christine Lahti) wanders into Fingerbone and settles into the house to live with her nieces. The perpetually rootless Sylvie is a most unlikely figure around which to construct a nuclear family. Her connections with other people are friendly, but casual -- a habit developed over years of meeting fellow drifters on freight trains, in bus stations and around fires in hobo camps.

But, after putting up with a pair of worrisome elderly aunts for a while, the sisters welcome Sylvie's refreshing eccentricity. And so does the movie audience. We're charmed by her air of unself-conscious flightiness. We'd like her to turn out to be some kind of wonderful, lovable maverick, an Auntie Mame who'll bring some fun and spark into the lives of these girls and shake up the stodgy, hermetic society of this early-'50s small town.

For the girls, Aunt Sylvie is the closest thing to family that they've had, apart from each other, since their mother passed away. Shortly after Sylvie's arrival, the waters of Fingerbone Lake overflow into the downstairs kitchen and parlor, as though the spirits of the girls' ancestors have come flooding back into the house as well.

Viewing everything with benign detachment, Sylvie seems perpetually distracted, her attention flitting from one thing to the next. At other times, she inappropriately fixates on one object of interest at the expense of all others: When a curtain catches on fire during a chorus of "Happy Birthday," Sylvie keeps right on blithely singing and smiling as she swats at the flames. The girls enjoy the freedom Sylvie offers them until they realize that what they have mistaken for trust is closer to unconcern.

One day, when they're supposed to be in school, the girls catch sight of Sylvie, standing as though in a trance on the edge of the bridge over Fingerbone Lake, as though preparing to join the rest of the family at the bottom. Later, Sylvie apologizes for having frightened them, but she says she thought they were in school. The hooky-playing sisters, expecting disapproval, are eager to confess: "We didn't go to school today." Sylvie smiles and replies with her own disjointed logic: "But, you see, I didn't know that." As Ruthie observes: "Aunt Sylvie's attitude toward truancy was unsatisfactory."

All of Bill Forsyth's films ("That Sinking Feeling," "Gregory's Girl," "Local Hero," "Comfort and Joy") have been about eccentrics, who are viewed with an enchantingly Gaelic brand of bemused and generous forbearance. "Housekeeping," his first US film, takes a darker, more complex view of idiosyncratic behavior, and is all the richer for it; it's the first Great American Film directed by a Scotsman. To the loopy highlanders in Forsyth's other movies, eccentricity is a way of life, something to be accepted naturally, as part of the landscape.

But "Housekeeping" takes place in a small backwoods US town where greater emphasis is placed on the social importance of fitting in. Some audiences may find the picture's gravity and ambiguity frustrating, but that's precisely what makes it such a moving (and disturbing) experience. Forsyth doesn't see Sylvie as simply a healthy or an unhealthy influence on her nieces; she's both. Much of "Housekeeping" is funny in the quirky, off-kilter manner of Forsyth's earlier movies, but the overriding tone is a somber one, suffused with melancholy. This movie, photographed in deep shades of blue, brown and gray, evokes a sadness so profound that after a while your bones begin to ache.

It's a sadness that has to do with being an outsider; with the painful loss of surrendering childhood innocence; with the difficulty of finding a place for yourself in a world that isn't what you hoped it would be; with acknowledging the fragility of all human connections and the fundamental unknowability of other people; and most of all, with an overwhelming sense of aloneness.

While marooned in the flooded house, Lucille gets restless and bored. She wants to seek higher ground, to go out and look for other people. At first, Sylvie doesn't understand; to her, the flood has been a blessing, allowing them to live in an ideal, self-contained world. Then, with just a hint of sorrow, Sylvie recognizes Lucille's symptoms: "Oh yes, the loneliness. I know, it bothers some people." Some forms of loneliness, like the kind ingrained in Sylvie, Ruthie and perhaps Lucille as well, are incurable. People just have to find their own ways of living with it.

Shy, awkward Ruthie feels an odd affinity with Sylvie and adores her as a kindred spirit. But the more conventionally pretty and outgoing Lucille starts to sense that there's something wrong with Sylvie's way of life. Wandering on a woodsy hillside one day, she says to Ruthie: "You know, we're just hiding up here," and the sisters, who have always been like two parts of the same person, living in an imaginary world of their own creation, are finally forced to separate.

Sylvie is a difficult role for an actor to play because she is never quite present at the event. There's a kind of disturbing vacancy in her eyes. Not that she's stupid; it's more like her mind has wandered off and left her body behind. Even at the end of the film, she remains elusive. If there seems to be something vague or insubstantial about Christine Lahti's performance, it's only because . . . well, that's Sylvie.

As always, Forsyth's perspective is gentle and tolerant. A more conventional movie would side with the eccentric and turn Lucille's decision into a kind of betrayal, a weak-willed capitulation to society's stifling restrictions. But here, Lucille's choice is every bit as painful and courageous as Sylvie's and Ruthie's. Forsyth shows each character coping with her inner loneliness as best she can.

The title, "Housekeeping," (from Marilynne Robinson's novel) conjures up a number of associations -- of home, domesticity, the maintainence of neat and orderly appearances, keeping up a respectable front. Sylvie turns her house into a cluttered nest, feathered with old newspapers, empty tin cans and stray cats -- a reflection of her state of mind. One of the title's implications is that whoever you are inside is relatively unimportant to most people, as long as you keep your house clean.