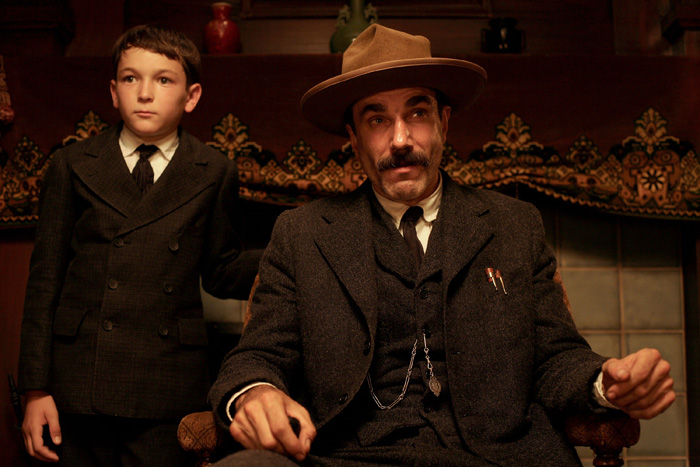 The Los Angeles Film Critics Association (my former homies) have announced their collective choices for best achievements of 2007 and... well, for now, I'll just say that I doubt most of them would even be on my short list of runners-up for this year. (I haven't seen "Sweeney Todd" or "Diving Bell and the Butterfly" yet, though.) I'm glad that some honorees are getting recognition: Milestone Films, Sarah Polley, Glen Hansard and Marketa Irglova (from "Once": music as dialog/acting), Jack Fisk (to whom I will always be grateful for, among other things, the prom in "Carrie," the house in "Days of Heaven" (1978), and pulling the lever in "Eraserhead" -- yes, that was him), "Persepolis" and "Ratatouille" (tied for best animated feature), Vlad Ivanov (for negotiating the trickiest of roles) and a few others. But I know how misleading these group-ballot things can be. LAFCA's list does leave the impression that they felt "Blood" (and, perhaps, "The Diving Bell and the Butterfly") tower the rest of the year's releases. I wonder if that's really the overwhelming majority opinion, or if it's another case of second- or third-choice consensus carrying the day. Too many of these seem like Academy-style picks to me (Most Noticeable Acting, Most Obvious/Intrusive Score, etc.). More about that later on in the month...

"I've cited to both Anne Thompson and David Poland the various fictions they've written about re. LAFCA's awards, namely that our pick for 'TWBB' had to do with going against National Board of Review (Anne) or the Academy (David). And now you say we were generally flying the contrarian flag. [...]

"By a wide margin, LAFCA felt... that 'There Will Be Blood' was the best American film of the year. That's all. No chess work, no calculations, no triangulation -- nothing but a matter of taste based on seeing more movies over the year than anybody else.

"And Jeff, the group judgement was based -- with perhaps no exceptions, since there was simply no time for most or all of us to view it more than once -- on a single viewing of 'TWBB.' It's a great movie on the first viewing."

[NOTE: In my post I did not surmise that LAFCA was intentionally striking any groupthink contrarian pose. I know from experience that it doesn't really work that way -- and, besides, LAFCA is the first crix group to vote, so what's to react against? But I wondered about the margin of victory, a legitimate question regarding the results of any balloting or committee decision-making procedure -- including the Oscars. Koehler's letter helps clarify that. I'm glad to know I disagree with some genuine majority sentiments rather than some statistical flukes. I disagreed with some choices when I was a member of the group, too -- and I don't know anyone who didn't, from time to time. It's a group of critics, you know....]

PICTURE: "There Will Be Blood" RUNNER-UP: "The Diving Bell and the Butterfly"

DIRECTOR: Paul Thomas Anderson, "There Will Be Blood" RUNNER-UP: Julian Schnabel, "The Diving Bell and the Butterfly"

ACTOR: Daniel Day-Lewis, "There Will Be Blood" RUNNER-UP: Frank Langella, "Starting Out in the Evening"

SCREENPLAY: Tamara Jenkins, "The Savages" RUNNER-UP: Paul Thomas Anderson, "There Will Be Blood"

MUSIC: Glen Hansard and Marketa Irglova, "Once" RUNNER-UP: Jonny Greenwood, "There Will Be Blood"

CINEMATOGRAPHY: Janusz Kaminski, "The Diving Bell and the Butterfly" RUNNER-UP: Robert Elswit, "There Will Be Blood"

NEW GENERATION: Sarah Polley, "Away from Her"