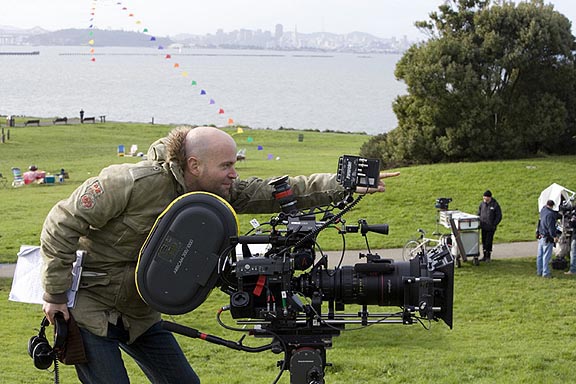 "The Kite Runner," directed by Marc Forster ("Monster's Ball," "Finding Neverland," "Stranger Than Fiction") and based on Khaled Housseini's best-selling 2003 novel, opens the Chicago International Film Festival tonight. But the New York Times reports that Paramount Vantage has delayed the US theatrical release out of concern for the safety of the child actors in the film:

The studio distributing “The Kite Runner,” a tale of childhood betrayal, sexual predation and ethnic tension in Afghanistan, is delaying the film’s release to get its three schoolboy stars out of Kabul — perhaps permanently — in response to fears that they could be attacked for their enactment of a culturally inflammatory rape scene.

Executives at the distributor, Paramount Vantage, are contending with issues stemming from the rising lawlessness in Kabul in the year since the boys were cast.

The boys and their relatives are now accusing the filmmakers of mistreatment, and warnings have been relayed to the studio from Afghan and American officials and aid workers that the movie could aggravate simmering enmities between the politically dominant Pashtun and the long-oppressed Hazara.

In an effort to prevent not only a public-relations disaster but also possible violence, studio lawyers and marketing bosses have employed a stranger-than-fiction team of consultants. In August they sent a retired Central Intelligence Agency counterterrorism operative in the region to Kabul to assess the dangers facing the child actors. And on Sunday a Washington-based political adviser flew to the United Arab Emirates to arrange a safe haven for the boys and their relatives.

In interviews, more than a dozen people involved in the studio’s response described grappling with vexing questions: testing the limits of corporate responsibility, wondering who was exploiting whom and pondering the price of on-screen authenticity....

Ebert writes of the film itself with great admiration:

How long has it been since you saw a movie that succeeds as pure story? That doesn't depend on stars, effects or genres, but simply fascinates you with how it will turn out? Marc Forster's "The Kite Runner," based on a much-loved novel, is a movie like that. It superimposes human faces and a historical context on the tragic images of war from Afghanistan.

The Times story reports that Paramount Vantage has delayed the theatrical release "by six weeks, to Dec. 14, when the young stars' school year will have ended."

Though the book is admired in Afghanistan by many in the elite, its narrative remains unfamiliar to the broader population, for whom oral storytelling and rumor communication carry far greater weight.

The Taliban destroyed nearly all movie theaters in Afghanistan, but pirated DVDs often arrive soon after a major film’s release in the West. [...]

In January in Afghanistan, DVDs of “Kabul Express” — an Indian film in which a character hurls insults at Hazara — led to protests, government denunciations and calls for the execution of the offending actor, who fled the country.

Perhaps not coincidentally, the “Kite Runner” [12-year-old] actor who plays Hassan... told reporters at that time that he feared for his life because his fellow Hazara might feel humiliated by his rape scene. His father said he himself was misled by the film’s producers, insisting that they never told him of the scene until it was about to be shot and that they had promised to cut it.

Hangama Anwari, the child-rights commissioner for the Afghanistan Independent Human Rights Commission, said on Monday that she had urged Paramount’s counterterrorism consultant to get Ahmad Khan out of the country, at least until after the movie is released. “They should not play around with the lives and security of people,” she said of the filmmakers. “The Hazara people will take it as an insult.”

This reminds me about another must-see movie from the 2005 Toronto Film Festival, Christian Frei's "The Giant Buddhas," now available on DVD. I never did get a chance to write about it from Toronto, but I want to rewatch it and discuss what it does -- looking at the statues of the Giant Buddhas, destroyed by the Taliban in 2001 through stories and perspectives both historical and contemporary.