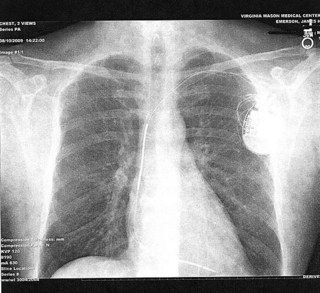 I'll be in the hospital most of Friday for my AV node ablation (see my latest film -- a little thing I like to call "Biventricular Implantable Cardioverter-Defibrillator" -- at right), but should be out this evening, when I will make an effort to approve comments. So, please, keep 'em coming in.

Meanwhile, although it might not have been the natural choice on the eve of a surgical heart procedure, I watched "Kill Bill Volume 1" last night, an experience I found thrilling (Tarantino and Robert Richardson know how to create images), though not at all involving. But that's the kind of movies Tarantino makes. They are abstract art, not strong stories, not emotional experiences. I thought of Hitchcock, who said his films are not slices of life but slices of cake. Tarantino makes candy necklaces, tasty chunks strung together -- little climaxes without much overall dramatic shape. Sometimes it's a little like ADD De Palma (love that split-screen sequence in the hospital), but Tarantino does not waste a single shot. Every single image has a place, a reason to exist in that particular context (see Dogme 09.8 #1, 3, 4, 5, 8, 9, 10), and it's so satisfying in contrast to the random mish-mash action editing of... well, you know the movies I'm talking about. Tarantino's eye makes me delirious with movie love.

Best of all, in Volume 1 there's not much stilted, wordy dialog to distract from the excellence and exuberance of the filmmaking. I'd like to see Tarantino do a silent film someday -- only music on the soundtrack. His music selections, as always, are dynamite, though sometimes too short and inconsequential (see Dogme 09.8 #6 about "segues using snippets of pop tunes that fade out just as they're getting started"). I'd like to see him really stretch out and develop more whole sequences around a piece of music instead of just a tiny piece of a piece of music. (Only reservation: the music during the first part of the fight in the snow between Uma Thurman and Lucy Liu was too slight and slick to fit the gravity of what should have been the climactic confrontation of Volume 1.)

More on Volume 1, Volume 2, "Inglourious Basterds" and other topics of interest after my ablation. (Sing along with the Ramones: "I wanna be ablated!")

JE: Back from hospital, in recuperation mode. I'm feeling much better... Not dead yet!

Next Article: Waiting for the end of the world Previous Article: Making movies in your head

Waiting for the end of the world

Making movies in your head