"The images that surround us today are worn out, they are abused and useless and exhausted. They are limping and dragging themselves behind the rest of our cultural evolution." -- Werner Herzog

Dogme 09.8 has the expressed goal of countering "certain tendencies" in the cinema today. In the spirit of Lars Von Trier's "The Five Obstructions," it acknowledges a fundamental truth -- that new constructive discipline is needed in filmmaking.

In 1995 enough was enough. The movie was dead and called for resurrection. The goal was correct but the means were not! Dogme 95 proved to be a secondary ripple that washed ashore and turned to muck. Purity turned to laziness. Obstacles became crutches. Babies were thrown out with bathwater. It was fun but very silly, and the results, filtering into every aspect of filmmaking worldwide, have been counterproductive and deadening.

But individuality requires skill, judgement, discipline and taste (good or bad, just not hacky) in order to be effective on the screen. Hackwork is hackwork, whether it's accomplished with handheld video cameras or computerized motion-control. As never before, the superficial action and the superficial movie are receiving all the praise.

Because movies are pure illusion! That is the stuff they are made of. There is no "documentary reality" -- unless, by that phrase, one means the illusory reality created by a film, including a so-called "nonfiction" or "verité" one. Stylistically, a Maysles documentary or a Cassavettes feature is every bit as much the product of aesthetic and technological artifice as a Michael Bay movie. Whether by employing obtrusive lo-fi technology, or the latest high technology, anyone at any time can make technology itself the subject of the film and wash away the last grains of cinematic illusion in the deadly embrace of sensation.

Dogme 09.8 celebrates the preservation of illusion, the visual integrity of Buster Keaton and the inventive wit of Ernst Lubitsch, by the presentation of a set of rules known as The Vow of Integrity:

1. Get a tripod. Learn how to use it. Human beings do not feel their heads bobbling around all the time. If they did, they'd throw up a lot more. The hand-held camera, once a legitimate tool, has been overused to death. It is beyond a cliché, beyond a "certain tendency" -- it has become the most obtrusive, commonplace annoyance in modern films, a hallmark of visual illiteracy. Audiences should throw things at the screen every time they notice handheld camerawork.

2. Location-recorded sound isn't the finished product. Don't stop there. Create a soundtrack that enhances the world of your movie. Most people think Ramin Bahrani's "Chop Shop" was recorded with "live" sound. It wasn't. It's nearly all created in the studio, densely layered and impeccably crafted to sound natural and spontaneous.

3. Shoot the movie so that it can be assembled in as few well-planned shots as possible. Every unnecessary cut is a colossal statement of failure. Each shot, and each cut, must have a reason to exist within the world of the film -- like words in a sentence, or sentences in a paragraph. Profligate cutting is wasteful and monotonous. It saps images of their energy and it too often disrupts the crucial rhythms of the interactions between the actors/characters. Remember Hitchcock's rules: Don't use your most powerful tools (cuts, camera movements, close-ups) until/unless they are necessary. In other words: Don't be a spendthrift with money shots.

4. No more than three consecutive shots should last less than one second apiece. Nothing undermines confidence and interest in a movie more transparently than a film that is too timid and skittish to allow itself to be seen. Hyperactivity is self-defeating. Allow the audience to meet the movie at least halfway.

5. If you can tell it's CGI, don't use it. If nobody will notice, go right ahead. If your monster or your spaceship or your location or your decapitation can't be created in camera or with analog effects (like matte paintings), don't assume you can fix it with CGI. If it violates the reality of the film -- no matter what it is -- don't show it. 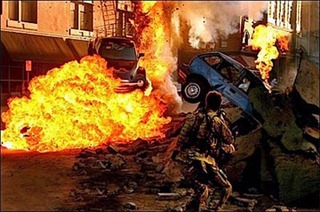 8. Know your genre and filmmaking conventions. You can't subvert them if you're not familiar with them. It's like jazz: You can't re-work the tune if you don't know the melody to begin with. You have to know which notes not to play, and which to play around.

9. Fit the format to the film. Your reasons for shooting on video, or 35 mm, flat or scope, should be apparent in the film itself. Take advantage of your chosen format.

10. Remember that every single thing in your movie reflects a decision. Even if it's an accident or an oversight, it's in there (or not) because you chose to put it there or leave it there. Or because you didn't notice it was there, which is essentially the same thing because somebody else will.

Thus is made the Vow of Integrity. Go forth. Make movies.

Got more suggestions for ways of restoring cinematic integrity?