Just when you thought it was unsafe to go into the water... 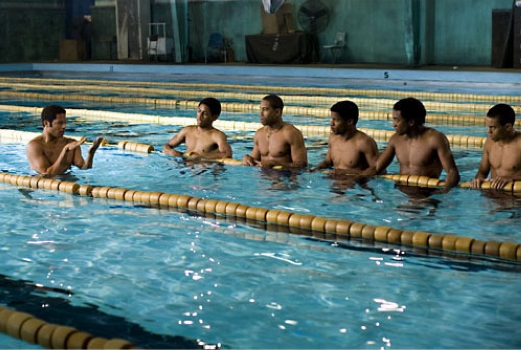 "Pride": Black Philadelphians can so swim.

Take this -- Rush Limbaugh, Snoop "I Can't Swim" Dogg,Tramm Hudson, Al Campanis and others who have reinforced the stereotype that African-Americans cannot swim well because they lack buoyancy. (I bet Martin Lawrence's Big Momma could float with hardly any effort at all, though maybe that's mostly because so much of her body mass is foam-rubber.)

Based on true events, Lionsgate's "Pride" tells the inspiring story of Jim Ellis, a charismatic schoolteacher in the 1970s who changed lives forever when he founded an African-American swim team in one of Philadelphia's roughest neighborhoods. [...]

Recruiting troubled teens from the streets, Jim struggles to transform a motley team of novices into capable swimmers – all in time for the upcoming state championships.…

By turns comic, rousing and poignant, "Pride" is a triumphant story about team spirit and courage in the face of overwhelming odds. 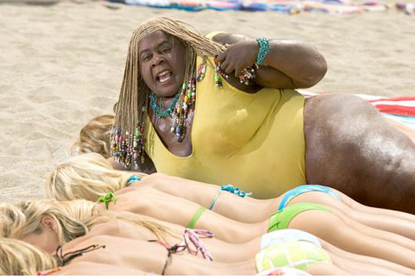 The real-life Ellis says it's not so much that African-Americans can't swim [right -- like people with Caribbean backgrounds have to avoid the water?], but that, in America, they don't bother to learn how:

It was my contribution to the black consciousness movement," Ellis says. "It was doing something they said we couldn’t do. It was a way of getting kids out of the neighborhood, exposing them to other things and greater possibilities." [...]

In 1987 former Los Angeles Dodgers General Manager Al Campanis, explaining on ABC’s "Nightline" why blacks could never become baseball field managers or team executives, argued that swimming proved that blacks didn’t have what it takes to reach the top.

"The just don’t have the buoyancy," Campanis told an astonished Ted Koppel.

"I put that one on my bulletin board," Ellis recalls. "For motivation."

But Ellis believes white racist attitudes aren’t solely to blame. He says many blacks are equally guilty for buying into the stereotype, dismissing swimming as a white country club activity or avoiding the water because it’s better to look good than to swim well.

Ellis cites statistics that black kids between ages 5 and 19 are more than twice as likely as white kids to die from drowning. He hopes the movie will encourage more blacks to learn how to swim.

Even Snoop Doggy Dogg-Paddle performed at a pool party in "Old School."