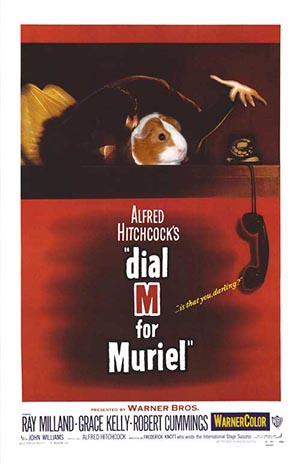 In 3-D, you'd swear Muriel was nibbling your proboscis. By the way, that's not her real phone number.

Although you probably think they are a reference to the 1963 Alain Resnais film,¹ or Bette Davis's bald uncle, The Muriel Awards are in fact named after Paul Clark's guinea pig. The one named Muriel.

The 2007 Muriel Awards are chosen by an elite body of web-based life forms who are united in their love of movies. Among them is Dennis Cozzalio, whom I have been meaning to congratulate on his handsomely redesigned blog, the renowned and beloved Sergio Leone and the Infield Fly Rule. (Admire the new logo! Steal his Oscar predictions! Compare them to Roger Ebert's! Compare them to Ali Arikan's and his drawing of Daniel Plainview!)

Meanwhile, over at Silly Hats Only, Paul is handing out the Muriels to the deserving... Muriel recipients. (We're not supposed to say "winners," are we?) Acting as his own Price-Waterhouse and Jon Stewart combined, he began handing them out February 13 and will continue until February 29, at which point his presentation will actually be longer than the Academy Awards. (I think that's a Bruce Vilanch joke that Whoopi didn't use. Or maybe she did.)

The acceptance speeches are short, smart, and to the point. From Kent Beeson's "thank you" to Josh Brolin:

"Right now, is there another actor who is better at simply doing? He's a remarkably unfussy performer, content to hold back on the emoting and let the actions, whether it be hiding a case full of money in a ventilation shaft or diagnosing a zombie bite, do the talking. It's the kind of style that could get lost in a loud, obvious kind of movie, and that's what nearly happens to him in Robert Rodriguez's half of "Grindhouse." "Planet Terror" is overstuffed with characters, and Rodriguez compensates by turning them into easily-identifiable cartoons -- except Brolin, who actively resists simplification. His vengeance-minded Dr. Block, thanks to Brolin's underplaying, comes off as morally damaged instead of the outright villain the story wants him to be. Yet, this is just doodling in the margins of a big-budget "B" film, and it didn't prepare anyone for his career-changing performance in "No Country for Old Men" (2007). As Llewelyn Moss, Brolin's gift for understatement finds a perfect match in the Coen Brothers' "less is more" style of cinema....

It's still early in the evening. It must be: They haven't even presented Best Supporting Actress yet...

Next Article: How to Give Your Oscar Speech Previous Article: Dina Martina's Oscar Entertaining Party Hints!

How to Give Your Oscar Speech