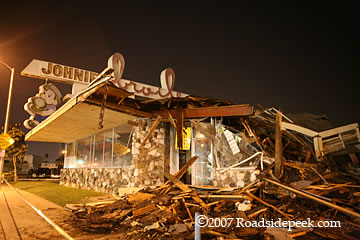 The Googie landmark Johnie's Broiler in Downey, CA (known as Harvey's Broiler when it opened in 1958), was ground into dust overnight last weekend, to expand a used car lot. Local preservationists were not pleased, and said the demolition was "illegal." As of today, the Johnie's sign is still standing, but the building has been destroyed.

Moviegoers may remember it as Lily Tomlin's place of work in Robert Altman's "Short Cuts." It was also featured in "Reality Bites," "What's Love Got to Do with It" and "Unstrung Heroes."

More reports on the demise of Johnie's at The LA Times and Roadside Peek, which is where I found the picture used here.

Anybody know of other movies in which Johnie's played a role?