Joe Lieberman on a Plane: Another dumb story about blogs 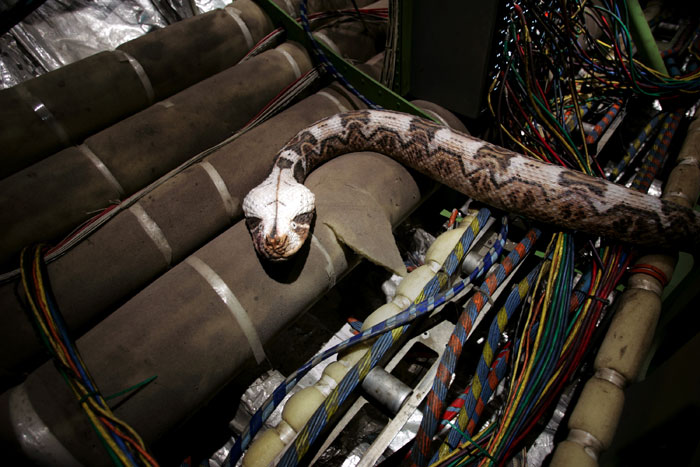 Oh, just pretend there's a Joe Lieberman head Photoshopped onto the snake or something. Or let the MSM do it for you...

When the conversation turns, as it so often does these days, to blogs (or "the Internets" as Stephen Colbert is fond of calling the online realm), you'll find an astonishing number of people who, even in 2006, have absolutely no idea of what they're talking about. Like Bruce Kluger in USA Today, who writes: "If ever America needed a wake-up call about the mythology of blogging, we got it this month.... "

Kluger, who also contributes to Parenting magazine and Huffington Post (god help 'em), proceeds to destroy the "mythology" that, well, didn't exist until it was created by the mainstream media (like USA Today)... because they don't know what they're talking about. Kluger cites the defeat of Joe Lieberman in the Connecticut primary (then increasing Joementum in recent polls) and the disappointing box office receipts for "Snakes on a Plane" as evidence of "the capriciousness of the blog culture":

Lieberman's boomerang reminds us that voters represent a meager percentage of the total populace — and that bloggers are an even tinier subset of that group. Consequently, what appears to be a coast-to-coast juggernaut on a 17-inch monitor is, in the real world, simply an elaborate PC-to-PC chain letter — enthusiastic, but not necessarily the national mindset.

O, capricious bloggers! How dare you fool the MSM into thinking you were all-knowing and all-powerful! Shame upon thee! This is a great example of what I was writing about the other day -- another Straw Man piece that sets out to strike down its own assumptions, none of which apply to the exterior universe. It's the JonBenet Ramsay "murder suspect" hysteria/drivel all over again.

Now "bloggers" may or may not have been influential in defeating Lieberman and championing "Snakes on a Plane" -- but how in the world did the enthusiasms of these "PC-to-PC chain letter" senders, sitting quietly behind their 17-inch monitors, get magnified and broadcast to the unaware folks in the "real world"? Through the MSM, of course -- who were terrified they'd miss a story and so made the Internet itself the focus of their reporting. Otherwise, real regular folks'd be blissfully ignorant of those nasty, misleading-but-impotent bloggers! (Let's be clear about this for the MSM dunderheads who keep using "bloggers" or "blogosphere" and "Internet" interchangeably: They're not the same thing. Everything that's on the Internet is not a blog.)

I wonder what would have happened if the MSM hadn't, all by itself, made predictions based on their interpretation of the "chatter" they noticed online. Perhaps they wouldn't be backpeddling in such an embarrassing fashion now. It's the MSM who were wrong, not the activist/enthusiast "bloggers," who were never doing anything more than expressing their opinions before the MSM gave them a stature, and an influence, they never pretended to hold in the first place. People organized on the web to defeat Lieberman because they didn't like his positions; they influenced the title and re-shoots for "Snakes on a Plane" because they loved the idea. So, if Lieberman lost and rebounded, or "Snakes on a Plane" didn't gross as much as the studio and non-web analysts predicted, how, exactly were those Internetters "wrong"?

"On the other hand," Kluger writes, "as August 2006 clearly demonstrates, bloggers can just as easily get it wrong. That's worth remembering." Will do. Sound advice. Now, just show me the place at, uh, Blogger Central where those "wrong" predictions were made on behalf of everybody on the Internets -- you know, about Lieberman's fall election chances and the box-office mega-triumph of "Snakes on a Plane" -- which were then dutifully reported as decisive by newspapers, magazines and television outlets. Because I only recall (overblown) pieces about the significance of the Internet buzz appearing in the MSM...