Jack Nicholson explains the Oscars for you 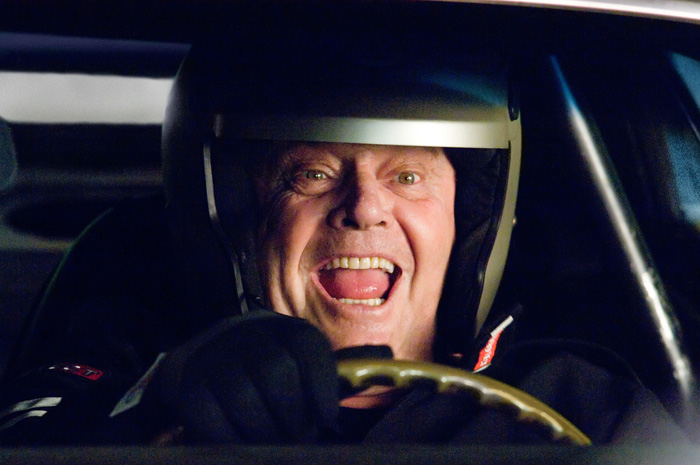 Look out, Oscar: Jack's behind the wheel.

Don't know how I missed this from last month's Variety, but in an interview with Peter Debruge, Jack Nicholson (most-nominated actor ever) gives his contrarian take on the Oscars that is typically blunt, not at all original, but realistic. And he speaks from a front-row perspective:

"I'm a big supporter of the Oscars from the beginning because I look at it for what I believe it was intended. However, for a very long time — and I don't voice this very much — I'm disturbed by what they call the 'Oscar race.' I've noticed that it's gradually spread, as though it were an election.

"This thing totally possesses the movie business for three months — and it's now spreading to five months. Well, this cannot be really good for movies. [...]

Nicholson's complaint is that so many filmmakers — actors, directors, writers — are so distracted by the Oscar attention for their previous films that they can't concentrate on the ones they're still making. He recalls the overlap between the Oscar campaign for "The Aviator" and work on "The Departed" — which went on to win Oscars for director Scorsese and for Best Picture of 2006:

"Marty and Leo and all of 'em ... I knew they wouldn't do anything for the three months between when we started and when the Oscars were over — and of course I was correct. And then the day after the Oscars, I landed on them, and from there on in, it was wonderful..."

In 2002 it was announced that "Oscar season," which some found so protracted that the ceremonies themselves seemed anticlimactic by the time they were held in late March, would be shortened by a month, beginning in 2004. Harvey Weinstein, then co-chairman of the Disney-owned Miramax, where he was (in-)famous for mounting massive and often successful Oscar campaigns ("The English Patient," "Shakespeare in Love"), told the New York Times:

''It took a long time for these small, indie movies to find parity in the Oscars with the big studio movies.... And this shift will only benefit the movies that get out to thousands of theaters in December and penalize those smaller movies on the back end.''

Coincidentally or not, Weinstein and his brother Bob (who left Miramax in 2005 to form The Weinstein Company) have not been listed as executive producers on any Best Picture nominee since "The Aviator" (2004).

UPDATE: Here's a question: Have you ever been watching a movie and gotten the impression that the actor(s) are thinking more about Oscars than their characters? I have...