Is it rape? Is it funny? 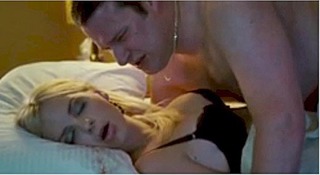 "If you thought Abu Ghraib was a laugh riot then you might love 'Observe and Report,' a potentially brilliant conceptual comedy that fizzles because its writer and director, Jody Hill, doesn't have the guts to go with his spleen. [...]

"What follows next should have been the shock of the movie: a cut to Ronnie [Seth Rogen] having vigorous sex with Brandi [Anna Faris] who, from her closed eyes, slack body and the vomit trailing from her mouth to her pillow, appears to have passed out. But before the words 'date rape' can form in your head, she rouses herself long enough to command Ronnie to keep going." -- Manohla Dargis, New York Times

"Because we laugh and gasp at what follows, does that mean we approve? Having seen Ronnie's actions in a movie, do we now believe that date rape should not be prosecuted -- that it is just harmless fun?

"Although I have never had such a dilemma in life, usually being the first to pass out, I hope I'd have the decency to walk away from a semi-conscious woman. I hope I also wouldn't harass a Muslim co-worker, use a Taser on a man who parks next to a loading dock, break into a mall and assault policemen, or triumphantly shoot an unarmed criminal. Although I adore 'Lolita,' I hope I am never tempted to lay a finger on a prepubescent girl....

"All this might seem crashingly obvious, but at least in this culture it can't be restated too often that comedy is not safe." -- David Edelstein, The Projectionist

Last weekend I witnessed a sort-of argument over whether "Observer and Report" was funny or not. Or maybe it was really about whether the movie was even supposed to be funny. I don't know for sure because I haven't seen it yet. So to me the discussion sounded mostly like: "It's not funny!" / "Yes it is! I laughed!" / "No it's not! I didn't!" / "Yes it is!" / "It's only funny to people I hated in high school!" / "Humor is hard to analyze because it's personal!" / "No it's not!" / "Yes it is!"...

So, maybe writer-director Jody Hill is the anti-Judd Apatow. No sweetness to leaven the raunch. I say this having seen neither of his features ("Observe and Report" or "The Foot Fist Way"), and only the first episode of "Eastbound and Down," a portrait of a small-time sociopath I found extremely funny. Favorite moment: birdlike John Hawkes ("Deadwood, " "Me and You and Everyone We Know"), shivering in his unheated backyard pool while drinking a Foster's while his blubbery pink brother (Danny McBride) splashes around obnoxiously.

But regardless of whether the so-called "date rape" scene is or is not a) date rape, or b) funny, (I'll have to figure that one out for myself), I've been interested in people's perceptions of the characters. I mean, nobody has said they were meant to be role models (thank goodness), but how "sympathetic" are the characters meant to be? Ronnie is a bi-polar sadist, and Brandi is... well, I cannot report until I observe first-hand. I'll let Kim Voynar of Movie City News give you her take:

I saw an interesting documentary at AFI Dallas called "Haze," which is mostly about the excessive alcohol consumption on college campuses in the Greek system. But there was one bit in particular that struck me in that film where a professor talks about studies on how drinking patterns, particularly among female students, have changed over the past couple decades. He says that many female students these days come to college intent on drinking as much as the boys do. They binge drink excessively -- 15-20 drinks at a sitting is no longer uncommon.

Another professor in the film states that many of the college-age, binge-drinking female students he has interviewed say they do so specifically to absolve themselves of responsibility for promiscuous sexual behavior. I'd like to read an actual study that verifies this somewhere, but the prevalence of overtly sexual behavior by college-age girls at spring break parties and exploitative series like Girls Gone Wild would seem to indicate that many 20-something young women today view their sexuality as something to flaunt and exploit, not hide under a bushel -- and they're using drugs and alcohol to relieve themselves of the inhibitions that might otherwise make them think twice about what they're doing.

Female empowerment is about the idea of women in control of their lives and their choices, not about women choosing to drink and drug themselves into a state of non-responsibility for their sexual decision-making. The depiction of Brandi in "Observe and Report" is clearly the latter.

Brandi is reprehensible -- and offends me as a woman by the way she represents women -- and you could argue that Jody Hill's take on her and the type of woman she represents is completely misogynistic, but Hill just put the stereotype of this young, sexually active, hard-partying woman on-screen. And if you don't believe that, just take a stroll down the main bar drag in any random college town on a Friday or Saturday night...

Kim Morgan at MSN Movies' Hollywood Hitlist and Sunset Gun thinks "Observe and Report" reflects contemporary reality from another angle. The Travis Bickles of today aren't to be found driving cabs but at the mall:

[If] you get behind director writer Jody Hill's subversive, hilarious, weirdly poignant and almost horrifyingly timely "Observe and Report," you'll see Travis, not only as a power-hungry security guard in the form of a schlubbier Seth Rogen, but also as a regular Joe consumer. He might be traversing the food court or staring at the ice skaters in the center rink or wondering if he can afford a flat-screen TV while making his mortgage payment, but he's there, facing down all of that cheaply made fast food, recycled air and overpriced merchandise. He's killing time and, to become even more of a downer here, he's killing his soul. Yes, he's killing his soul at... Cinnabon. It's funny and yet it's not. It's also, so far, the best movie of the year.

Such is the power of "Observe and Report," a movie that tips its hat to movies like "Taxi Driver" and "The King of Comedy," but remains an animal all its own. Hill's study of a delusional, deranged head of mall security could only exist now. And, as funny as it is, it's going to get to people who are feeling faceless, disenfranchised and empty. With all of cinema's syrupy bromances, mean, shock humor comedies, and Judd Apatow life lessons to either catch an easy, gross-out laugh or lift one's spirit, emboldening one to finally grow up, "Observe and Report" reveals how complicated this really is.

But again, I repeat, "Observe and Report" is a comedy. I think...

The humor, Morgan says, is rooted in that very uncertainty, the queasy feeling of not knowing if you should laugh... and the prospect of maybe feeling even queasier if you do. She knows many people will absolutely hate the soul-sucking ugliness on display. But she relishes the perversity, which she considers "more shocking than, say, (and I admire the following examples) that junkie epic 'Trainspotting,' and a lot more subversive than anything Michael Haneke hatches up. Because 'Observe and Report' isn't playing at your local art house. No, it's playing right in the belly of the beast: at the mall."