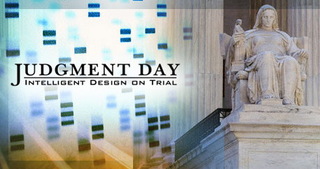 ... of impersonating a scientific theory. The 2005 federal court case was recounted in a 2007 NOVA documentary called "Judgment Day: Intelligent Design on Trial" that re-aired on PBS this week (and can be viewed online here; full transcript here.) I recommend it as a detoxifying antidote to Ben Stein's risible 2008 "Expelled: No Intelligence Allowed." Among my problems with that bait-and-switch doc was that it offered no evidence to suggest that ID should be considered a scientific theory any more than, say, creationism or astrology. Of course, there are good reasons for that -- the main one being that it was invented as a hasty response to the 1987 Supreme Court decision that found the teaching of creationism as science in public schools was a violation of the Establishment Clause of the US. Constitution.

"Darwin's Black Box" author Dr. Michael Behe, a senior fellow at the Discovery Institute, which promotes ID, testified under oath that his definition of alternative "scientific theory" would include astrology as well as Intelligent Design (but not creationism). It seems the irreducibly supernatural ID was born under a bad sign.

A few other highlights:

Dr. Eugenie Scott of the National Center for Science Education, explains a few reasons why Intelligent Design is not a scientific theory:

In Edwards v. Aguillard, the Supreme Court found that creationism is religious, and not scientific, in nature. Hardly a controversial notion -- and, indeed, the decision stated:

We do not imply that a legislature could never require that scientific critiques of prevailing scientific theories be taught.... Teaching a variety of scientific theories about the origins of humankind to schoolchildren might be validly done with the clear secular intent of enhancing the effectiveness of science instruction.

Intelligent Design has flopped because it does not present any theoretical scientific challenge to evolution. As ID movement leader and young earth creationist and Paul Nelson said in the Christian Touchstone Magazine (July/August, 2004):

Easily the biggest challenge facing the ID community is to develop a full-fledged theory of biological design. We don't have such a theory right now, and that's a problem. Without a theory, it's very hard to know where to direct your research focus. Right now, we've got a bag of powerful intuitions, and a handful of notions such as "irreducible complexity" and "specified complexity" -- but, as yet, no general theory of biological design.

OK, let us know when you've got something. The trouble with ID all along, and one of many reasons it's been dismissed as laughable, has been that the new label was so hastily and transparently substituted for "creationism" after the 1987 Supreme Court decision that even its own proponents don't know what it's supposed to mean. One religious textbook publisher made hasty and incomplete search-replace text swaps of one term for another after the case was decided. (See "Of Pandas and People.") The evidence in early drafts included peculiar transitional typographical forms such as "Cdesign proponentsists," which became known as the "missing link" between "creationists" and "design proponents."

In the meantime, Happy 200th Birthday, Charles Darwin -- and thanks for my flu shot!