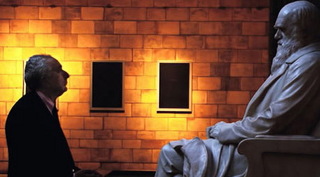 The interview takes place at Dachau. Ben Stein questions Dr. Richard Weikart (author of "From Darwin to Hitler") with the concentration camp as backdrop:

According to Stein, "Darwinism" (the label Stein applies to those who have dismissed "Intelligent Design" as unworthy of serious intellectual consideration) has been shown -- historically and scientifically -- to lead to evil and the celebration of death, as exemplified by Naziism, the Holocaust, eugenics, abortion, euthanasia...

And that is why Intelligent Design is a legitimate scientific theory.

Scene after scene of "Expelled: No Intelligence Allowed" repeats this mutant species of illogic, which falls laughably short of basic scientific or mathematical standards of expression. I could quote you a hundred similar examples, but you can't really argue with the movie because it fails to put forth an argument -- any argument. OK, that's not really fair. It doesn't try.

Instead, it posits that Darwinism, an insidiously powerful creed that demands scientists blindly follow Charles Darwin as they would the Fuhrer, is evil, or a slippery slope at least, and that is anti-religion, anti-freedom and anti-American, not to mention flawed and incomplete.

"What, exactly, about Intelligent Design," you might well ask. But you would get no answer. Not from this film.

"Expelled" tells us many things that Intelligent Design is not. It is not Creationism. It is not saying that life on Earth is too complex to have evolved to its current state (a common, lazy misperception). It is not religious, either, although one of the problems with Darwinism is that it's also not religious and leads to irreligion.

(For reasons unknown, Stein lets the Austrian monk Gregor Johann Mendel, whose harsh natural laws regarding the inheritance of dominant and recessive genes in sweet peas made him the father of "Mendelism," off the hook completely.)

One spokesman comes close to articulating a thought about Intelligent Design:

"If you define evolution precisely, though, to mean the common descent of all life on earth from a single ancestor via undirected mutation and natural selection -- that's a textbook definition of neo-Darwinism -- biologists of the first rank have real questions...

"Intelligent Design is the study of patterns in nature that are best explained as a result of intelligence."

I think there's another word for that: "tautology."

(If you want to, you can find the Dachau interview above, from which most of my quotations are verbatim, in the movie at roughly 1:14, according to NetFlix via TiVo.) 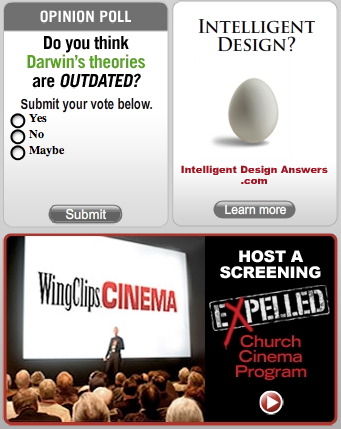