I'm Not There: Ode to Joy

I listen to Bob Dylan for the music, not the words. I know: heresy. But it's the truth: I listen to him for the way he sounds, and that includes the sound of the words. The literal meaning of the lyrics, or what people used to call the "message" (if one can be found or deciphered), is secondary, just one dimension of his art. In his 1960s folk-pop-culture ascendance, Dylan's songs were scrutinized for coded messages -- supposedly embedded "between the lines," as die-hard folk-popsters PP&M put it in their satirical ditty about the superficiality and commerciality of rock 'n' roll music. That pop-culture illusion -- that Dylan and the Beatles were sending out encrypted signals into the collective consciousness, and especially to you -- is something Todd Haynes plays around with quite a bit in "I'm Not There" -- a pseudo-documentary/biopic not unlike his "Superstar: The Karen Carpenter Story," but with six actors playing Dylan instead of Barbie dolls playing The Carpenters.

But before we get to that: No, I'm not at all knocking Dylan as a poet or a lyricist. (I read Ezra Pound and T.S. Eliot and e.e. cummings for their music as much as anything else, too.) If Dylan's words weren't so satisfying to sing out loud, he wouldn't be much of a songwriter, would he? I mean, how does it feel to sing "How does it feel?" It feels fantastic, that's how. The black bile of those spleen-venting, "finger-pointing" songs ("Like a Rolling Stone," "Positively 4th Street," "Ballad of a Thin Man") can be so cathartic. All those playfully cryptic, electric-surrealistic rhymes in "Subterranean Homesick Blues" (cue cards, anyone?) can make you dizzy with delight. A simple couplet like, "They sat together in the park / As the evening sky grew dark," doesn't look like all that much on the page, but you hear Dylan sing it and you feel a spark tingle to your bones.

What I mean to say is that, even if Dylan were writing in a language no one else on Earth knew (and sometimes I think that's exactly what he means to do), his great songs would still be great songs. Take Beethoven's Ninth Symphony. Do you need to know the meaning of the words in Schiller's "Ode to Joy" to appreciate the fusion of vocal and orchestral sounds in the last movement?

Admit it! It feels so groovy to say! (Or sing.) I feel the same way about "My warehouse eyes, my Arabian drums," and "Awop-bop-a-loo-mop alop bom bom" (by Dylan's idol Little Richard) and "Beat on the brat with a baseball bat" (The Ramones) and "A mulatto, an albino, a mosquito, my libido" (Nirvana).

In Jude Quinn's (Cate Blanchett) last scene in "I'm Not There," he's riding in the back of a limo, apparently giving an interview to an off-screen reporter. The words come from a 1966 Playboy interview with Nat Hentoff:

What I’m talking about is traditional music … with all these songs about roses growing out of people’s brains and lovers who are really geese and swans that turn into angels—they’re not going to die. … You’d think these traditional music people would gather that mystery is a traditional fact. These things are so full of mystery … contradictions … chaos, clocks, watermelons, it’s everything. People think I have some kind of fantastic imagination. It gets very lonesome. Traditional music … it’s too unreal to die. … And in that music is the only true valid death you can feel today off a record player. Like everything else in great demand people try to own it. … I think it’s the meaninglessness that’s holy.

"Everybody knows I'm not a folk-singer," Jude says, looks at the camera, and gives us a Mona Lisa smile.

Bob Dylan appears in the last shot of the movie. He's not there in any of the others. In the first shot, adapted from "Don't Look Back," the camera is Dylan, as he makes his way on stage (see "This Is Spinal Tap"). Oh, but there I go again. I'm trying to emphasize the Dionysian side of a movie that's Apollonian in intelligence. It's worth mentioning (as many have) that Todd Haynes majored in art and semiotics at Brown University. Haynes did extensive research and has compared his filmmaking method to writing a doctoral dissertation.

But as Robert Sullivan wrote in a New York Times Magazine story about the film:

And, for everything else you can say about the film (and much can be said), what I believe he's made is an ode to joy. Yes, it's all about cultural references and signifiers and analysis and interpretation and image-manufacturing and PR. It's neither fish nor fowl: neither yellowtail nor chicken (see above). I laughed, I cried. Afterwards, I was elated, stoned, so happy just to be alive.
Advertisement 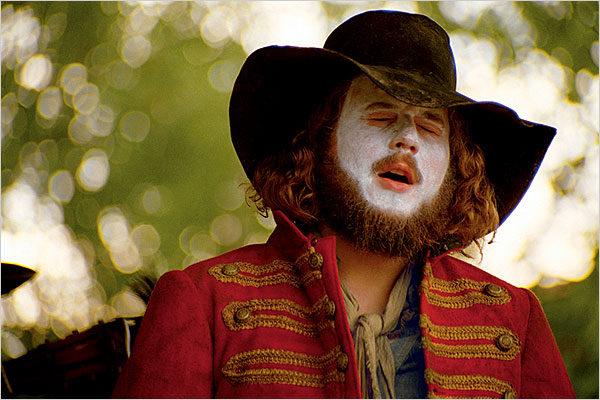 It's significant, I think, that the movie's most ecstatic musical moments -- ones that also signal turning points in the narrative -- are built around songs considered "lightweight" by some of Dylan's hardcore folkie fans: the electric machine-gun of "Maggie's Farm" (a straight-ahead blues) that scandalizes the "New England Jazz and Folk Festival"; the raunchy "Goin' to Acapulco" ("She puts it to me plain as day / And gives it to me for a song"), transformed into a haunting dirge for the surrealist town of Riddle by Jim James (in "Rolling Thunder Revue" whiteface) of My Morning Jacket, accompanied by Calexico as a funeral band; and, for a few glorious moments at the end, Dylan himself singing a pop song (and a No. 1 hit for The Byrds), "Mr. Tambourine Man" -- mostly the wail of his harmonica, like a midnight train whining low.

Although "I'm Not There" was co-written and directed by Haynes, and a title says it was "inspired by the music and many lives of Bob Dylan," one screen credit that shouldn't be overlooked is this one: "Story by Todd Haynes." Fragmented and kaleidoscopic as the movie's approach may be, there's a story (or, rather, stories) that's no more difficult to follow than "Traffic," "Babel" or any other "network narrative" movie -- and, even for those who know next to nothing about Dylan, probably a whole lot easier than "Syriana" or "The Fountain." The primary difference, of course, is that the six main characters are all aspects of one character, although none of them is called "Bob Dylan."

Sure, "I'm Not There" is a phantasmagoria, riddled with historical, musical, cinematic, biographical and miscellaneous pop-cultural references and details, but it's also structured as a parody of ultra-familiar bio-pic formulas and clichés, so that you sense where the story beats are, even when the chronology is scrambled. The foreshadowing of The Motorcycle Accident under the single-shot Godardian title alone is a blast: just a motorcycle streaking across the 'Scope screen, black and white with some brown lettering. Whether you know there was a legendary Motorcycle Accident or not (you will), it's a delightful set-up for the autopsy scene that follows -- which is, among other things, a riff on the apocalyptic, Paul-Is-Dead-like speculation that swirled around the crash at the time. But you don't have to know that. Let me put it this way: If the flat-out spoof "Walk Hard: The Dewey Cox Story" can approach "I'm Not There" as a genre parody, we're in for another real good time.

Maybe "parody" isn't quite the right word. Is "Superstar: The Karen Carpenter Story" a bio-documentary parody? Or the investigative doc and horror movie sections of "Poison"? Or the Sirkian melodrama of "Far From Heaven"? Todd Haynes' movies are all smart as a whip and sharp as a tack, but they make you laugh and they make you cry. And, sometimes, they make you sing.