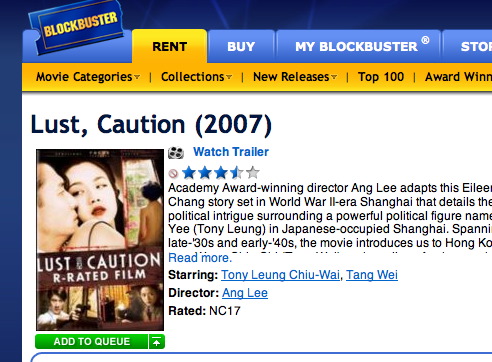 The site says "NC-17" but the box art says "R." Ang Lee's "Lust, Caution" (2007) won the Venice Film Festival last year. But that's not the version Blockbuster carries. Would you have known you weren't seeing the version released in the US -- especially if you rented it based on the contradictory online info you see here?

IFC Entertainment has made a two-year agreement with Blockbuster® Video, giving the moribund sales and rental mega-chain "an exclusive 60-day rental window, including both the physical and digital rental distribution channels, for each title as it becomes available. During this period no title will be available on a retail basis in any format."

According to a joint press release, "After the 60-day period, the IFC titles will be available on a non-exclusive basis both for retail and digital distribution. However, Blockbuster will retain the exclusive physical rental distribution rights for IFC titles for three years after each street date." (You read that right: It's a two-year agreement with a three-year exclusive.)

Currently, some IFC Films, released on their First Take label ("Paranoid Park," "4 Months, 3 Weeks, 2 days," "Hannah Takes the Stairs," "The Wind That Shakes the Barley"), have been available via Comcast's On Demand service the same day they arrive in theaters. Will that still be the case?

The Weinstein Company made an "exclusive" four-year deal with Blockbuster that went into effect in 2007, although that hasn't prevented NetFlix or other competitors from renting or selling Weinstein movies under the "first sale doctrine." As the Dallas Morning News reported at the time of the Weinstein-Blockbuster agreement: "Under federal statute, companies such as Blockbuster and Netflix are able to rent out the movies they purchase without getting permission from anyone."

Meanwhile, Blockbuster won't even carry some of IFC's existing releases (see below). S.T. VanAirsdale at The Reeler is among those who are not pleased with IFC's Faustian pact:

The real movie people at IFC -- and they know who they are -- have to be beside themselves today, as do filmmakers like Gus Van Sant and Joe Swanberg, whose work just lost the portion of its future audience that maybe is loyal to its local video store and doesn't want to buy "Paranoid Park" or "Hannah Takes the Stairs" (thus further enriching Genius Products) for the apparent privilege of watching either film on DVD before 2011. What planet are these people from, and what can be done about them? Is it too early today for a drink? Or is it too late?

Advertisement
If you were to check into the availability of films on DVD at Blockbuster Online, among the titles you will not find are "Crash" (David Cronenberg,1997), "Beyond the Valley of the Dolls" (Russ Meyer, 1970 -- screenplay by Roger Ebert), or "This Film Is Not Yet Rated" (Kirby Dick, 2006), an IFC Films release. They're not even listed, because they were rated NC-17 and Blockbuster will not make such films available through their stores or online service. (See David Edelstein's article, "Blame Blockbuster, not the MPAA.) 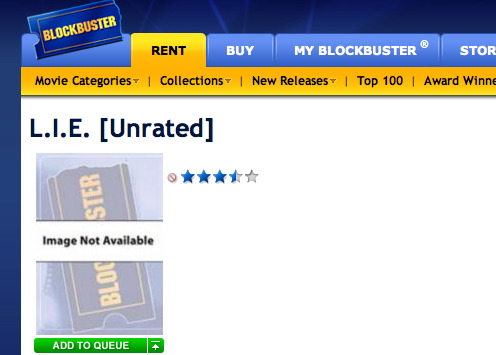 Rentable or not rentable?

You will also not find the theatrical releases of Ang Lee's "Lust, Caution," Takeshi Miike's "Audition," John Waters' "A Dirty Shame," Peter Jackson's "Dead-Alive," Bernardo Bertolucci's "The Dreamers," Abel Ferrara's "The Bad Lieutenant" and many other films that are only available in cut versions (in some cases heavily cut versions) that have been re-submitted to the MPAA for an R rating just so they could make it onto Blockbuster's shelves during their first few months of release. You tell me if 2001's "L.I.E.," directed by Michael Cuesta ("Six Feet Under," "Dexter"), starring Paul Dano and Brian Cox, is available from Blockbuster Online. There's no box art, no description, no credits info, but there's a page for it here.

Does IFC think its core audience doesn't care about the integrity (or lack thereof) with which a company like Blockbuster treats the movies it rents and sells? I mean, if they don't, who does? You'd think the core IFC constituency would be precisely the "movie consumers" who, in principle, would not patronize a place like Blockbuster, any more than they would order a Domino's pizza. 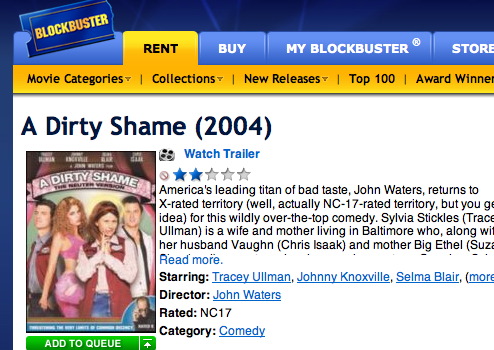 Blockbuster licenses its blurbs from All Movie Guide. That makes for confusing rental information like the above, which describes an NC-17 version of the film that Blockbuster does not, in fact, carry.

For the many reasons mentioned above, I wouldn't be caught dead in a Blockbuster. Or, rather, that may be the only way you could catch me there. I don't like their deceptive and contradictory business practices (family-friendly Blockbuster is the former exclusive distributor of Showtime's soft-core "Red Shoe Diaries"). Besides, Netflix (the company that invented the unlimited monthly rental model) has a broader selection (I don't have to worry about getting re-cut or pan-and-scan versions I don't want) and ships to me in one day. So, I'm perplexed by this IFC-Blockbuster agreement. It's like an organic bell pepper farmer making an exclusive deal with 7-11. How many organic bell peppers are you going to sell to 7-11 customers? And how much does 7-11 stand to benefit by stocking organic bell peppers next to the Slurpee machine?

"We're delighted to join with Blockbuster as we continue our mission of making independent film available to the widest possible audience. Blockbuster's national store network combined with its by-mail and downloading services, made this a particularly appealing agreement for us because it gives millions of customers increased access to our movies."

"This agreement with IFC is a great opportunity for Blockbuster to provide our customers with convenient access to the best of independent film. Whether it's through our stores, through the mail or through digital downloading, our customers will have access to some of the most exciting, thought-provoking films the indie filmmaking world has to offer. We look forward to working with IFC to dramatically expand our selection of independent titles and to being the exclusive rental outlet for films that otherwise might not have gotten exposure to such a broad audience."

Soooo... how does an exclusive agreement that restricts the number of places people can buy or rent these films make them more likely to be seen, exactly? Were Blockbuster's customers previously denied access to IFC DVDs? I wouldn't know, because I've never shopped at Blockbuster, I'm unaware of their store locations, I think their web site (which I visited while researching this post) is a disaster, and I consider the whole idea of video stores to be very 1987. In the 2008 world of Netflix and Greencine and Amazon and Half.com and so many other online, cable and satellite services and stores, how does this Blockbuster deal make IFC's "independent" films significantly
Advertisement
more available? And what does the phrase "millions of customers increased access" mean? I can't wait to see how many more copies of the Romanian abortion movie they're going to move now!

NOTE: Although rumors have long circulated that Blockbuster makes its own specially edited, "cleansed" versions of some titles (like CleanFlicks did until they were legally prohibited), I've never seen evidence of that. What I do know is that dear, naive friends who have relocated to rural areas¹ have rented R-rated films from Blockbuster and were later mystified to discover that their pals had seen entire scenes that they did not. Only when it was too late did they learn that what they had rented was not the original theatrical version available everyplace else. They had been duped because they were unaware that, in order to get the film into Blockbuster, the distributors had re-cut the film and paid the MPAA's fees for approval of an additional R-rated version.

ADDENDUM: See comments below about Blockbuster Video's refusal to carry Martin Scorsese's R-rated 1989 "The Last Temptation of Christ." Blockbuster did at some point start selling the film over the web, and sometime after the Blockbuster Online rental service was launched in 2004, the film became available for rental that way. For more information on the "Last Temptation" tempest, see PBS's "Culture Shock: Flashpoints" page here.

(tip: The House Next Door.)