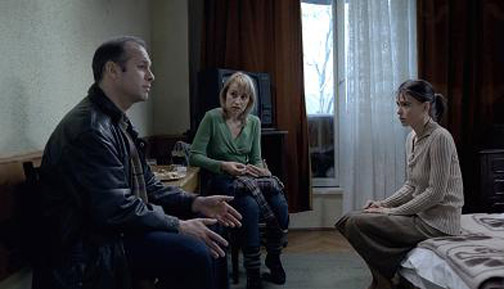 When it comes to grim accounts of healthcare issues and bureaucracy in Romania, photographed in long takes with a hand-held camera, the 2007 Cannes Palme d'Or winner "4 Months, 3 Weeks and 2 Days" plays like a screwball comedy next to last year's relentless three-hour endurance test, "The Death of Mr. Lazarescu." (A test, by the way, that I failed.) That's not to say it's any less harrowing; it's just shorter and, in my view, less distractingly theatrical. (The cinematographer is the same -- Oleg Mutu -- so the difference may be in the director.)

Here, the long takes (sometimes entire scenes) don't keep reminding you that they're being filmed by somebody walking around with a camera. The work is steady, controlled, disciplined. And, like several impressive films at this year's Toronto Film Festival (including "No Country for Old Men," "Chop Shop," "Persepolis," "Paranoid Park") it chooses just the right moment to cut to black at the end. (That's a favorite device of mine, and it seems to be quite popular about now.)

As you may know, Cristian Mungiu's film is about an abortion, which virtually guarantees it will be "powerful." But what makes the movie work is the portrayal of the characters: Otilia (Anamaria Marinca), the central character, helps her passive-aggressive roommate Gabita (Laura Vasiliu) arrange for an illegal, hotel-room "probe" procedure performed by a cut-rate black market abortionist who goes by the name Mr. Bebe (Vlad Ivanov).

But this isn't just another story about women victimized by men in a repressive and bureaucratic political system (although it is that, too). The most infuriating character in the whole piece is Gabita, who is so irresponsible and "helpless" that she deliberately puts Otilia at risk again and again, by forcing her to take all the risks except for the actual procedure itself. You wonder how the weak and utterly blank Gabita ever even survived to reproductive age, and whether she would have done anything at all if Otilia hadn't stepped up to take responsibility. (Gabita seems like the type who would just give birth and then walk away from the baby -- whether in the hospital or in an alley somewhere.)

This in no way excuses the ways Mr. Bebe exploits the situation, but during a painful, protracted negotiation in the hotel room, your sympathies are -- for a while, at least -- more with him than Gabita. She has failed to follow any of his instructions (meeting him in person, reserving the room), which makes him justifiably distrustful in a country where performing an abortion carries a stiff prison sentence. But he eventually crosses a line, from understandable paranoia to cold manipulation of the situation.

"4 months..." is a sharp political commentary about free-market forces in a socialist bureaucracy where nearly everything is regulated by the government. In certain respects, Mr. Bebe is simply an entrepreneur, a man who identifies a need and fulfills it to make a profit. Pure capitalism, supply and demand. Meanwhile, the government keeps its citizens' social, economic and private lives wrapped in a binding of red tape.

I'd love to see a Bordwellian Average Shot Length analysis of this film. Fortunately, the long takes don't call attention to themselves. One such shot at a dinner table, during a birthday party at the home of Otilia's boyfriend, is composed with the boyfriend's mother on the left, Otilia in the center, the boyfriend slightly behind her, and his father on the right. Olilia has just left Gabita in the hotel room after the abortion. She doesn't want to be here, and she's thoroughly distracted. The conversation and activity (eating, smoking, drinking) go on all around her, and she remains relatively immobile in the frame. She is in the action, but not of it, and the camera communicates her distress and unease with subtle effectiveness.

"4 months..." is an impressive film. But it does not reflect well on the Cannes jury that it was chosen for the Palme d'Or over the Coen brothers' "No Country for Old Men." That seems almost inconceivable. One is a good movie; the other very nearly defines the essence of movies.