I don't watch too much television, but I definitely read too much on the Internet. I know this because just last week I read something about television and now I can't remember where I read it.* The writer was mock-complaining that TV isn't as mindless and undemanding a leisure activity as it used to be, ever since "The Sopranos." What with "The Wire" and "Mad Men" and "Deadwood" and "Breaking Bad" and "Dexter" and other non-old-network series, you actually have to pay attention to watch TV these days. (If you remember reading something along those lines, please send me the link.) No more just leaving the set on whenever you're home in order to drown out the voices. These shows require as much concentration (and more memory and commitment) than most feature films -- or perhaps (a closer comparison) modern novels.

A New York Times essay by A.O. Scott last weekend asked: "Are Films Bad, or Is TV Just Better?" Yes, it's a false dilemma (what does the quality of one have to do with the quality of the other?), but it's the kind of headline that catches the notice of the knee-jerk TV haters who are still stuck in the three-network "vast wasteland" of 1961. Scott wrote:

Will any of the movies surfacing this fall provoke the kind of conversation that television series routinely do, breaking beyond niches into something larger? This bad summer movie season, in what seems to be one of the best television years ever, reinforces a suspicion that has been brewing for some time. [...]

Look back over the past decade. How many films have approached the moral complexity and sociological density of "The Sopranos" or "The Wire"? Engaged recent American history with the verve and insight of "Mad Men"? Turned indeterminacy and ambiguity into high entertainment with the conviction of "Lost"? Addressed modern families with the sharp humor and sly warmth of "Modern Family"? Look at "Glee," and then try to think of any big-screen teen comedy or musical -- or, for that matter, movie set in Ohio -- that manages to be so madly satirical with so little mean-spiritedness.

I swear, I'm not trying to horn in on my colleagues' territory. But the traditional relationship between film and television has reversed, as American movies have become conservative and cautious, while scripted series, on both broadcast networks and cable, are often more daring, topical and willing to risk giving offense.

"Mad Men" -- just in the last few weeks of fourth-season episodes alone -- has been more cinematically stimulating than most of what I've seen this year at the movies (and by that I include 2009 and 2010 releases on cable, pay-per-view and DVD). There are few narrative pleasures as satisfying as getting to know characters over time, so that a moment -- the exchange of looks through the glass doors between Peggy and Pete in "The Rejected"; the long night of hashing things out between Peggy and Don, culminating in a touch of hands that resonates across years in "The Suitcase"...

David Bordwell looks at some of the pleasures and perils of series television in a somewhat tongue-in-cheek post at Observations on film art:

It is natural that the actual plot of a single self-contained episode should be comparatively unimportant. . . . The very limitations of the style leads its creators to develop characters of considerable depth, to create dramatic conflict out of the interaction of people rather than out of an artificial juxtaposition of events. As television is a prime medium for transmitting character, this is all to the good. (Writing for Television, pp. 115-116)

Ich bin ein TV-phile. That "informal intimacy" DB writes about is unique to television because of the way it unfolds over time. When something happens in Season 1, Episode 2, it may not pay off, or work itself out, until Season 3, Episode 5. An event that unfolded in our shared present in Season 1 actually is shared history by Season 3 -- even if we're watching whole seasons at a time on DVD. So many of the acclaimed cinematic achievements of recent decades were made for television, even if they were released in theaters in some markets: RW Fassbinder's "Berlin Alexanderplatz," Dennis Potter's "Pennies From Heaven" and "The Singing Detective," Krzysztof Kieslowski's "The Decalogue," David Lynch's "Twin Peaks," Edgar Reitz's "Heimat," Marco Tullio Giordana's "The Best of Youth," David Simon's "Generation Kill," and so on...

I am passionately interested in what people call "form" (and by that I mean not just "long-form storytelling," but how something is photographed and edited) and character, above all. Sure, there's usually a plot -- but what I consider "storytelling" has more to do with photography and editing and character than plot. The "what" is always determined by the "how." Which is why I could not understand those who said the last couple seasons of "The Sopranos," or the third season of "Mad Men," were "slow." All kinds of things were happening with the characters, but most of it was conveyed in images and expressions rather than in direct action or explicit dialog. 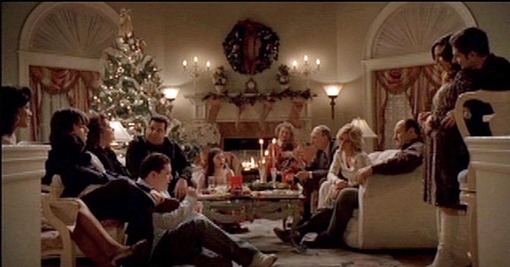 * This is the story I was thinking of -- David Carr in the New York Times, "The Glut of Shows Unwatched":

Television, which was once the brain-dead part of the day, had become one more thing that required time, attention and taste. I have fond memories of the days when there were only three networks and I could let my mind go slack as I half-watched Diane and Sam circle each other on "Cheers," because that was pretty much the only thing on.

This one's worth reading too, from n+1: "Treasure Island: How TV serials achieved the status of art, which surveys long-form fiction from Jane Austen and Charles Dickens to "Hill Street Blues" and "The Wire."