How not to blow your Oscar speech 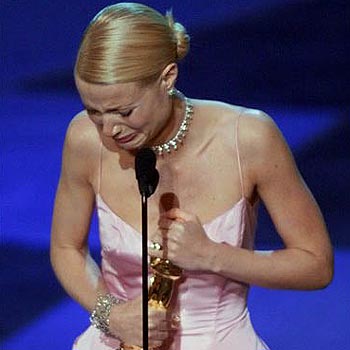 From my handy guide on how to avoid making yourself a laughingstock during your Oscar speech, at MSN Movies:

The main thing to remember when you win your Oscar (and you know you will win your Oscar one day -- admit it, you've even practiced your acceptance speech) is that you are immediately faced with 45 seconds during which you can either display grace under pressure or make a complete ass of yourself.

Contrary to Academy legend, Sally Field did not do the latter when she gave the most parodied and ridiculed acceptance speech in Oscar history in 1985. "I haven't had an orthodox career, and I've wanted more than anything to have your respect," she said. "The first time I didn't feel it, but this time I feel it, and I can't deny the fact that you like me, right now, you like me!"

Now, that last part, which came out a bit squeaky, wasn't as bad as many later made it out to be. It wasn't, after all, "You like me! You really like me!" My theory is that the repetitive phrase was memorized in advance (it sounds a bit canned) and that she simply oversold it in the excitement of the moment. Instead of making it sound more spontaneous, her delivery underscored (genuine though the sentiment might be) that this was, in fact, another performance, which felt kind of embarrassing to watch. And audiences can really resent it if you embarrass them, to the point where they respond defensively with scathing sarcasm and mockery.

Don't let this happen to you. Here's some advice for giving your Oscar speech, when the time comes.

1. Get a Grip Why is it that the only people who really appear to lose control when they accept their statuette are the actors? Why don't the art directors and sound editors sputter and wail as if they'd just been spared from lethal injection? If anything, you'd think the actors would be better able to control their emotions than most people.

And you'd be right. You see, actors dig emotional meltdowns, on screen and off. They do it on purpose. It's almost a form of noblesse oblige -- a generous Acting Gratuity (more than 20 percent), if you will: "I will now treat you to an extraordinary demonstration of how deeply I am moved!" And, at the same time, it's a form of grandiose self-inflation and self-abasement: "I scrape and bow to acknowledge how much YOU have honored ME!"

Of course, Gwyneth Paltrow (Best Actress, "Shakespeare in Love," 1998) just stood there and squeaked like a broken drip-irrigation node, but at least she had the decency to be horrified and humiliated about it later, claiming she'd put her Oscar at the back of a bookcase because it brought back painful memories of her big, pink weep-down.

One of the most divisive Oscar speeches of recent years (some were moved, some were appalled) was the tornado of tears Halle Berry whipped up around herself when she won Best Actress for "Monster's Ball" in 2001. Berry's Interminable Moment-of-Special-Pleading was a gale-force ego storm that threatened to suck up the entire universe. It was like the Big Bang in reverse: "Oh, my God. Oh, my God. I'm sorry. This moment is so much bigger than me," blubbered Berry, trying desperately to make the moment big enough for her. 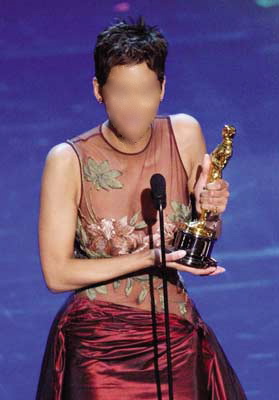 The Halle Berry Best Actress of the Future: "And the Oscar goes to... Nonameo Whatsherface!"

"This moment is for Dorothy Dandridge, Lena Horne, Diahann Carroll," she continued, in a name-dropping paroxysm that cried out, instead, for Lloyd Bentsen. "It's for the women that stand beside me, Jada Pinkett, Angela Bassett, Vivica Fox. And it's for every nameless, faceless woman of color that now has a chance because this door tonight has been opened." Yes, because now all nameless, faceless women of color have a much better chance of becoming Best Actress Oscar winners, just like their universal idol, Halle Berry! The odds have suddenly improved from roughly 3,000,000,000:1 to maybe as close as 2,999,999,999:1. Good news for nameless, faceless women of color everywhere!

"Thank you. I'm so honored. I'm so honored," Berry further honored herself. "And I thank the Academy for choosing me to be the vessel for which His blessing might flow." Which brings us to our next piece of advice ...