High camp: Does it translate? 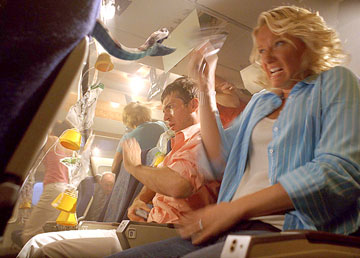 Hissy fit over the South Pacific.

Carlos from Venezuela raises some intriguing questions in his comments about "Snakes on a Plane" below. Some excerpts from what he wrote:

This leads me to the big question, how in hell is ... New Line Cinema planning to market the movie in territories where the concept of "so bad that is good" is not as widespread as in some other countries, like the US or the UK?

To me the newspaper ads printed in Venezuelan newspapers ... seemed like they were for any of the usual Straight to DVD (pirated or not) movies that open commonly in my country in mainstream Cinemas (like Van Damme flicks, forgettable sequels of classic Disney films and the like)....

They (the printed ads) were trying to appeal the horror factor of the movie/concept, without any indication of the non-existent local hype about the movie, that for most Venezuelans stars the "guy from Blade/XXX: State of the Union/Lethal Weapon/Training Day/Boat Trip/Pulp Fiction" I stress this not because Im trying to make a cheap unPC remark. It is because for most of the audiences in Venezuela, there's no extra "OH the B*das* Motha*c*a Sam Jackson is saying mothaf*c*ing snakes" factor, its basically any familiar African Amercian actor saying subtitled profanites and I have the feeling that it might not be THAT different in Thailand or Ecuador, but I could be wrong.

So what you have left is a plain bad planned plane movie. The movie is totally stripped off its toungue in cheek (aspired) value, and I dont think that we're going to get the explanaiton of its campy factor from Hugo Chávez' Sunday tv show either.

BTW: Im planning to see it. And I will see it in the one cinema closest to the Caraca’s downtown, where I could be almost certain that no one would be polluted by the E! Latinamerica globalized hype machine.

For perspective, it may help to remember that among films not originally released as "spoofs" in the United Sates are: "Mommie Dearest," "Showgirls," "Red Dawn," "Rambo: First Blood Part 2," "The Jazz Singer" (Neil Diamond/Laurence Olivier version), "Mystic River" and "Crash" (2005). All of these movies were instantly considered camp classics by a significant minority, even if they weren't received that way by mainstream audiences when they first appeared in theaters.