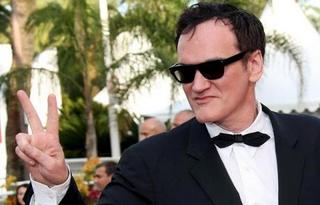 Quentin Tarantino told a BAFTA audience in London last month that he'd like to remembered for a body of work, like Howard Hawks.

This sparked a discussion between Anne Thompson and Jack Mathews of moviefone.com over at the indieWire-hosted Thompson on Hollywood (cross-posted at Slate Film Salon) -- a "dueling blog" about whether Tarantino (who told the New York Times that he worked quickly to get "Inglourious Basterds" ready for Cannes because he "wanted to have a masterpiece before the decade's out") can be said to have produced "a legacy of greatness":

JM -- ... No question, he has proven his greatness to his hardcore fans, among whose numbers many critics and film scholars can be counted. But in the 16 years since "Pulp Fiction," he has not come close to matching that film's brilliance. His movies, while enjoyable to watch, are self-indulgent games for him. If "Inglourious Basterds" is a great war movie, "Blazing Saddles" is a great Western. They're both fun but that's all they are.

AT --Wow. Do movies have to educate us?

JM --No, but a great movie, like a great novel, has to do more than merely entertain. And for a filmmaker as interested in his legacy as Tarantino is, the body of work which he thinks is now ripe for analysis falls far short of greatness.

AT -- While we disagree about what 'great' cinema is, I do look forward to seeing Tarantino mature and grow....

Hang on a minute, here. Tarantino aside, how can you enter into this discussion without attempting to more precisely define what you mean by the term "great movie"? Mathews says it has to be something more than just "fun" or "entertaining." Thompson says she disagrees. Are "fun" or "entertaining" even relevant terms in a discussion of greatness in art? Does a movie have to engage the emotions in order to be considered "great"? The intellect? Might "greatness" have something to do with style, or what Eric Rohmer called "the relationship between content and expression" -- given that the expression is the "content"? What do you say?

Next Article: The Monthlies Previous Article: The Seoul of a New Movie Machine: Dude, you gotta see it in 4-D!

The Seoul of a New Movie Machine: Dude, you gotta see it in 4-D!