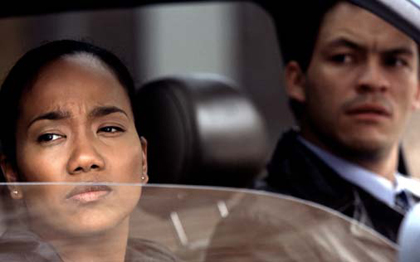 Sonja Sohn (left, with Dominic West as Detective McNulty, in "The Wire"): The future of America, I hope!

The wee bundle of joy who raises the US population to an even 300 million (for a fraction of second before we zoom past the milestone) may be a beautiful brown baby boy! We're a nation of ethnic mutts (and I'm of English-Irish-Italian-Cuban heritage -- proudly "mixed race"), but I wish I could live long enough to see the day (and it won't be that long) when most Americans will resemble Tiger Woods or Sonja Sohn or Bejamin Bratt or Halle Berry or Cameron Diaz or Jimmy Smits or Salma Hayek or... Well, OK, the beautiful ones, anyway. From Reuters:

A baby boy of Latino heritage, born in Los Angeles on Tuesday, might well be the 300 millionth American. The 200 millionth, a Chinese-American lawyer in Atlanta, says he'll be very relieved.

It is possible to make an educated guess at who the 300 millionth American will be, said demographer William Frey of the Brookings Institution.

"I predict it's going to be a Latino baby boy, born in Los Angeles to a Mexican immigrant mother," Frey said by telephone.

This prediction makes sense, Frey said, because about half of U.S. population growth is due to Hispanics, the biggest gains in the Hispanic population are in Los Angeles, more boys are born than girls and the U.S. population is growing more due to natural increase than through immigration.

"In theory, it could be anybody who crosses a border, who comes off a plane as a new immigrant or is born anywhere in the United States but if you have to put the odds on high probability, I would say my guess is pretty good," Frey said.