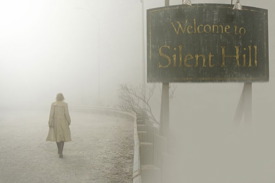 There was a buzz circulating among students at the University of Colorado at Boulder during the Conference on World Affairs last week about "Silent Hill," the new horror film by director Christophe Gans ("Brotherhood of the Wolf," "Crying Freeman") with a screenplay by Roger Avary ("Pulp Fiction," "Killing Zoe"). Their hope is that it just might turn out to be one of the first good movies based on a video game. However it's received, I do like the director's taste in horror movies.

In an Los Angeles Times article earlier this week, Gans chose his "Seven Best Modern Horror Films." One of his more unusual choices, John Carpenter's "Prince of Darkness," was among the four underrated horror films I wrote about last year here (the others: David Cronenberg's "The Brood," Roman Polanski's "The Tenant" and Neil Jordan's "In Dreams").

Ganz has a beautiful description of "Prince of Darkness," too: "It's a beautiful movie in a way because it is a very abstract movie — completely abstract. It was produced almost the same year as "Blue Velvet" by David Lynch, and they both lead the audience into abstraction. It is something that is difficult to explain, something that you feel. It was a new step in horror film."

Among his other choices: Dario Argento's "Deep Red," Tobe Hooper's "The Texas Chainsaw Massacre," Jack Clayton's "The Innocents" and George Romero's "Dawn of the Dead." See Gans's entire list, and his comments about the films, here.