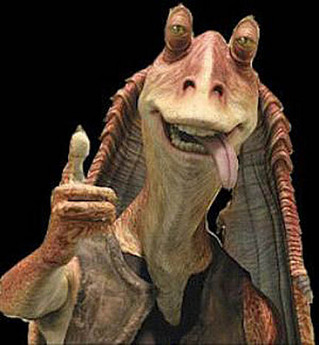 What would pundits and stand-up comedians do without their "Star Wars" analogies? Maureen Dowd liked to refer to the former vice president as "Darth Cheney." She recently asked George Lucas if that comparison was a mischaracterization:

Lucas explained politely as I listened contritely. Anakin Skywalker is a promising young man who is turned to the dark side by an older politician and becomes Darth Vader. "George Bush is Darth Vader," he said. "Cheney is the emperor."

Amy Davidson, at the New Yorker's News Desk, is having none of it ("Close Read: Dark Forces"):

Bush as Vader is ludicrous. The comparison betrays a failure on Lucas's part to understand the resonance of his own characters, which explains a lot, especially about Episodes I & VI. Other than being the father of twins, Anakin Skywalker, born a slave, with extraordinary abilities (the "best pilot in the galaxy"), has almost nothing in common with Bush, born to privilege and not much of an advertisement for the notion of a natural aristocracy. Is Jenna going to be Luke and bring him back from the Dark Side? If we are going to play this game, Bush has more in common with Count Dooku, the Jedi dropout turned warmonger, or, better yet, Jar Jar Binks, who, after a buffoonish youth, improbably rises to a prominent political position and obliviously fronts for the soon-to-be emperor in getting the "Star Wars" equivalent of the Patriot Act passed. Of course, all this can be taken too far (Condoleezza Rice as Asajj Ventress?), but one thing is clear: Donald Rumsfeld is Grand Moff Tarkin.

Yeah, but Dooku -- like the torture-embracing Vader -- was once a Jedi Master and W. never mastered anything in his entire life. We elected Jar Jar Binks to the White House at least once. We'll continue to suffer the consequences of that for generations.