Following: Nolan in a nutshell

"You look at the first Fellini movie and you can see the seeds of all of Fellini there," said David Cronenberg in a 1999 interview with Sean Axmaker (connected to the release of "eXistenZ"). He was using the example to speak of any filmmaker with a discernible vision, including himself: "Everything is filtered through my own sensibility and my experiences of life and so on, and I'm going to continually be drawing from the same pool of imagery and themes I'm sure, with modifications and adjustments to the angles and of course I'm learning different things about myself, but the connections should be there."

You can certainly see the seeds of Christopher Nolan's later work in his 1998 debut feature "Following," which I just saw for the first time and quite enjoyed.* And I'm not just referring to the auspicious Batman sticker on the door of its protagonist's flat (how could he have known... unless the past and the future were somehow folded together... ?) or the hommage to Stanley Kubrick's "The Shining" (another movie in which past, present and future intermingle) next to the guy's typewriter.

Already in "Following" you see Nolan's affinity for convoluted chronological structure and the final twist, in which all the jigsaw plot pieces snap into place and you finally see the whole picture (along with the main character). You may wonder just how necessary/integral they are, but they help make the film fun to watch, even if they don't necessarily add up to a whole lot. 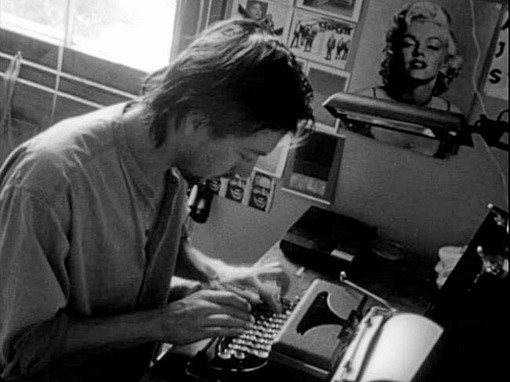 It begins with an interrogation/confession. A young man named Bill (Jeremy Theobald, who brings a halting, naturalistic freshness to his voiceover and dialog) is being questioned by an older man (John Nolan) about his habit of following people just to see what they do and where they go. He kind of rationalizes that it's "research" (he wants to be a writer), but it seems more likely that he's unemployed and bored. There's an element of voyeurism at work, but it's not primarily sexual -- at least not at first. It's more like he doesn't really know much about people, and he's curious to see how they behave. He explains a thought experiment where he picks somebody out of a crowd at a football game and, suddenly, they become an individual to him.

"After a while I became hooked," he admits. "I had to start making up rules just to try to keep it under control..." Now we're really getting into Nolan's favorite zone: Having characters explain "rules" they've made for themselves (or he as screenwriter-director has made for them). Some are common sense, like don't follow women down dark alleys late at night. But the one that eventually gets him in trouble is the first one he breaks: Don't follow the same person twice. "When it stopped being random," he says, "that's when it started to go wrong."

This sets up his fateful encounter with Cobb (Alex Haw), a thief of memories (not unlike Leonardo DiCaprio's dream-thief Cobb in "Inception"), who likes to break into people's homes and take items -- not because they're valuable, but because he likes to remind them of what they had. He enjoys getting inside their heads (figuratively) and shaking up their complacency, causing them to re-evaluate what they took for granted in their lives (kind of like the character of Jigsaw in "Saw" -- though much less bloody).

Cobb knows how to read a room -- to walk into someone's house and figure out who they are just by looking at how they live. "Everyone has a box," Cobb says (prefiguring the dream-vaults of "Inception"), where not just their secrets but their memories and clues to their identities are kept. Personal items -- "like snapshots, letters, little trinkets from Christmas... Sort of an unconscious collection, a display... Each thing tells something very intimate about the people. We're very privileged to see it. It's very rare." He dumps out one such box, just so the people will know he's seen it. "It's like a diary. They hide it. But actually they want someone to see it. That's what I do. See their display."

Up to this point, "Following" has appeared to be more or less linear -- though, of course, we know it's being narrated as a flashback. (But not, as it turns out, just your ordinary framing device; indeed, it's very much like "The Usual Suspects," except the teller of the tale is not the one in control). Nolan has fun scrambling chronology and playing around with visual details -- the length of Bill's hair, his style of dress, bruises on his face -- just to keep us guessing about what is happening / will happen / has happened in the gaps.

Even in his relatively straightforward narratives, Nolan favors parallel-action cross-cutting. Here, the parallel action seeps into the narrator's awareness, as if taking over the story from him. As he begins to put the pieces together, we see what really happened (or what he now imagines must really have happened), intercut with his dawning understanding of events.

When the final twist comes, it's not unexpected -- and, like many of Nolan's clever tricks, it doesn't really develop or illuminate the film's themes -- but it makes for an nifty piece of punctuation to mark the end of the movie. The last shot, of a figure literally disappearing into the throng on a crowded street, reminded me of the rear-view mirror conclusion of "Taxi Driver" (though Scorsese was playing more ambiguously with more visual and thematic levels). I'm sure other films have done something similar, but I can't think of them at the moment. Anyway, it's a very simple, unostentatious and nicely accomplished effect.

Nolan was his own camera operator and cinematographer here, and the dark, grimy/grainy black-and-white (I'm guessing 16mm that sometimes looks like 8mm) works splendidly for the nourish tone of the film. There's a scene in a lounge that's so dark it seems like an abstract idea of a lounge: a backlit bar, a door, a table (always in a separate shot) on the other side of the room where The Bald Guy is watching... (Disclosure: I watched it on my 55" Sony Bravia Rear Projection HDTV through Netflix Instant.) Witty little character touch (though I wish it hadn't been given its own shot): Bill orders a beer. The bartender gives him the bottle, then turns around to get a glass. Bill starts swigging from the bottle. The bartender puts the glass back. This place is a little high-end for Bill, who isn't a sipping kind of guy.

"Following" shows the Nolan we now know almost fully formed at the age of 27 or 28. (You can interpret that as a sign of precociousness or an indication that he hasn't grown as rapidly as his production values.) But what is the film about? As I recall, nobody comes right out and states its themes. Maybe it's about a would-be writer getting an education in human nature. Maybe it has something to do with picking someone out of a crowd and building a story around him -- though it's not necessarily the story you think it is. Maybe "Following" is to short-story writing what "Inception" is to big-studio filmmaking -- a metaphor for the process itself. But, if so, what does it have to say about that process?

IFC has made "Following" available through various on demand services. See it if you have the inclination. I'd like to get your thoughts.

* BTW, I found more to appreciate in "The Prestige" the second time through, too. I still don't like where it goes and how it gets to the final revelation(s) -- although, as I and others have suggested, perhaps that letdown is built into the movie from the start, as the inevitable response to the disclosure of a magic trick's secret. But at least the second time through I could better appreciate some of the filmmaking. Now that I have a DVD of it, I want to go back and look at how he presents the magic -- when he chooses to cut during the tricks and when he shows them more or less "whole."