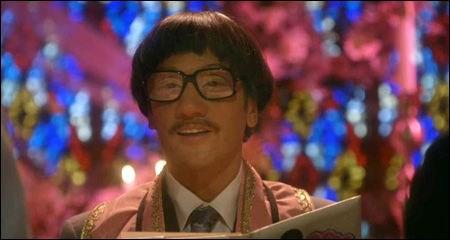 Rob Schneider in "yellowface", playing Mickey Rooney in "Breakfast at Tiffany's" in "I Now Pronounce You Chuck and Larry."

"Flamers" was the title of a screenplay by Barry Fanaro ("The Golden Girls," "Kingpin," "Men In Black II") that had been re-written by Alexander Payne and Jim Taylor ("Citizen Ruth," "Election," "About Schmidt," "Sideways"). Once Adam Sandler decided to star in the movie, this script was serially re-written some more by Sandler, his friends, and various others. The result opened this weekend as "I Now Pronounce You Chuck and Larry," directed by Dennis Dugan ("Happy Gilmore," "Big Daddy," "The Benchwarmers").

The film has not been well-received by critics (14% at Rottentomatoes.com at this writing). Manohla Dargis, in the New York Times, wrote:

Fear of a gay planet fuels plenty of American movies; it’s as de rigueur in comedy as in macho action. But what’s mildly different about “Chuck & Larry” is how sincerely it tries to have its rainbow cake and eat it too. In structural terms, the movie resembles a game of Mother May I, in that for every tiny step it takes forward in the name of enlightenment (gay people can be as boring as heterosexuals), it takes three giant steps back, often by piling on more jokes about gay sex (some involving a priceless Ving Rhames). Into this mix add the stunningly unfunny Rob Schneider, who pops up brandishing buckteeth, glasses and an odious accent in apparent homage to Mickey Rooney’s painful, misguided turn as the Japanese neighbor in “Breakfast at Tiffany’s.”

“I Now Pronounce You Chuck & Larry” has been deemed safe for conscientious viewing by a representative of the Gay & Lesbian Alliance Against Defamation, a media watchdog group. Given the movie’s contempt for women, who mainly just smile, sigh and wiggle their backdoors at the camera, it’s too bad that some lesbian (and Asian) Glaad members didn’t toss in their two cents about the movie. If Mr. Sandler dares speak in favor of gay love in “Chuck & Larry” — at least when it’s legally sanctioned, tucked behind closed doors and not remotely feminine — it’s only because homosexuality represents one type of love among men. Here, boys can be boys, together in bed and not, but heaven forbid that any of them look or behave like women.

But there's a little more to this one than the usual Sandler vehicle. New York Magazine explains some of the backstory in "A Peek at the Movie ‘Chuck & Larry’ Could Have Been":

And in the dramatic conclusion of Payne and Taylor's script, Chuck and Larry kiss on the courthouse steps — "not just a timid exchange," the stage notes add, "but the long, passionate melting together of soul-mates. Tongues and everything. Hot. Wow." Needless to say, this scene never made it into the final version.

I believe that ending was already perfomed by Will Ferrell and Sacha Baron Cohen in "Talladega Nights: The Ballad of Ricky Bobby."