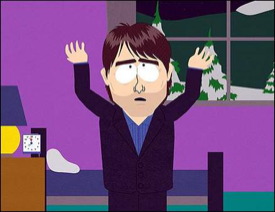 "... the evil galactic warlord who made all of this possible."

"Trapped in the Closet" -- the infamous 2005 "South Park" episode that miraculously combined elements of Scientology, the reincarnation of the Dalai Lama, the Second Coming, L. Ron Hubbard, Tom Cruise, John Travolta, R. Kelly, Xenu and Stan -- has been nominated for an Emmy Award, even though it's been banned from showing in the UK, and from re-airing in the United States, reportedly due to pressure from Tom Cruise and/or Scientology, two of the most unpredictable litigious forces on the planet Earth.

The episode is nominated for Outstanding Animated Program (for Programming Less Than One Hour). So, Comedy Central (and Viacom), are you going to allow this acclaimed episode to be seen (again), outside of Canada and Turkey?

Today, BTW, marks Day 120-Something of "South Park" Held Hostage in America, and spineless Viacom is beginning to resemble the presidency of Jimmy Carter in its final days.