'Fire Walk With Me' and the Lost Language of Code 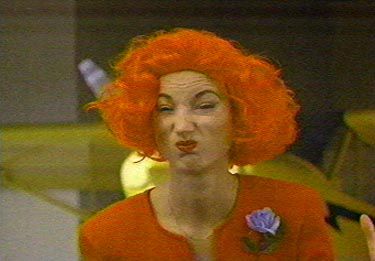 Here is Lil. She indicates that this is one of Gordon's blue rose cases.

When I saw David Lynch's "Inland Empire" for the first time a few weeks ago, I knew I was going to be reviewing it for the Chicago Sun-Times and, given the quintessentially Lynchian, fractal nature of the three-hour film, I didn't know how I was going to do that. It's just not a movie that you can summarize in the usual terms of story, character, cinematography, direction, etc., and still convey a sense of what it's about, and what it's like to watch. The first thing I thought of was a scene near the start of Lynch's radically underestimated "Twin Peaks: Fire Walk With Me," in which a complex set of coded information is conveyed entirely through pantomime, involving facial expressions, gestures, dance and dressing up. I wish I could have reviewed "Inland Empire" by doing something like what Lil does in "Fire Walk With Me." (If I could, I'd try dressing up like Grace Zabriskie and contorting myself into a writhing human mobius strip...)

Please consider this article my contribution to The Lynch Mob at Vinyl Is Heavy, where this week you'll findt lotsa Lynch links and criticism. What follows is a slightly revised and updated version of a piece I wrote about nine or ten years ago for my Twin Peaks site at cinepad.com.

"Twin Peaks" was conceived as a series (like "The Fugitive" before it) in which the central "mystery" (Who killed Laura Palmer? Who killed Dr. Richard Kimble's wife? And what of the one-armed man?) would spin off new complications, week after week, but would never really be solved -- at least (in the case of "The Fugitive") until the end of the series. (I like to think of it as sort of the TV series version of Buñuel's "The Discreet Charm of the Bourgeoisie," where the characters keep on walking but never seem to get anywhere. Instead of preventing these people from eatinga meal, "Twin Peaks" would continually deny the audience and the characters a solution to the mystery. I still think that's a great idea.)

But soon (or finally, depending on how you look at it), public and network pressure forced the hand of "Twin Peaks" co-creators David Lynch and Mark Frost, and they revealed Laura Palmer's murderer a few weeks into the second season. Lynch said recently (2007) in Seattle that, for him, the series was basically over once identity of Laura's killer was exposed. Ratings dived and creative ennui set in shortly thereafter. But a year later Lynch released a feature film (hissed and booed at the Cannes Film Festival) that promised to go into explicit detail (certainly more so than you could do on network television in the early 1990s) about exactly what happened on the night of Laura Palmer's death.

It was a typically perverse Lynch move -- belatedly rehashing details about a year-old, already-solved murder on a TV show that had been cancelled by the time the movie was released. Even more perversely, Lynch and co-writer Robert Engels began this feature-film prequel with an absurdist prologue that -- in case you hadn't caught on by know -- pretty much explained the spirit, and method you should have invoked to watch "Twin Peaks" in the first place. (The film -- originally sub-titled "Teresa Banks and the Last Seven Days of Laura Palmer" -- was supposedly re-cut before release; Lynch's full shooting script is available online here.)

Lynch himself reprises his role as FBI Bureau Chief Gordon Cole, standing in front of a woodsy photorealistic backdrop in his office that recalls the tropical mural used for trompe l'oeil effects at the house of Dr. Jacoby (Russ Tamblyn) in the series. Gordon, as you may recall, can't hear too well. He is accustomed to communicating in other ways -- through signs, signals, symbols, omens, clues. And he expects his agents to speak his language.

"I've got a surprise for you. Something interesting I would like to show you," Gordon yells into the phone at Special Agent Chester Desmond (Chris Isaac). When Desmond and Sam Stanley from Spokane (Kiefer Sutherland) ("Sam's the man who cracked the Whitman case") meet Gordon at the private Portland airport, they're treated to a peculiar, ritualistic display of body language by a woman in a reddish-orange dress with flaming hair to match. Gordon introduces her as Lil, "my mother's sister's girl." Lil makes faces, blinks, sashays around, and waddles away.

Afterwards, in the car, Sam asks the questions that all good "Twin Peaks" devotees are meant to ask again and again: "What exactly did that mean?" And Desmond matter-of-factly ("I'll explain it to you") deciphers a bizarre series of signs and signals and symbols and omens and clues that Lil's little "dance" conveyed about the case they were about to embark upon.

The details don't really matter much (a sour face indicates trouble with local authorities, one hand in her pocket suggests they're hiding something, walking in place means a lot of legwork, tailored dresses are code for drugs, etc.) -- it's the manner in which this info is coveyed that's important. In its secret heart of hearts, "Twin Peaks" is an epistemological thriller about perception and the ways that we assemble information about the world around us (see Mystery Without End, Amen). We humans may be capable of certain higher brain functions, but Lil's dance conveys information in a sophisticated, ritualized way that isn't that far evolved from, say, the dances of cranes. In "Twin Peaks," dreams and Tibetan rock-throwing rituals are just as vital and valid forms of detective work as forensic science. Maybe more so. 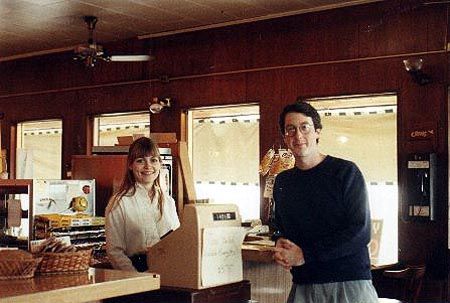 Me at the Double R Diner (aka the Mar-T) in the spring of 1990, with a waitress who looks suspiciously like Laura Palmer.

Oh, and the most important sign was that Lil was wearing a blue rose. But, Desmond says, "I can't tell you about that."

And here we have a little mystery. The conundrums without answers are, of course, the most intriguing of all. Suddenly, all the other stuff evaporates from our consciousness -- OK, drugs, legwork, local authorities, fine. Got it. Let's move on: What about the blue rose?!? All we ever really learn about it in the rest of the movie is a remark Agent Cooper makes to Diane that this is "one of Gordon's 'blue rose' cases" -- whatever that may mean. I can't tell you.

[For more about the thematic and geological territory of "Twin Peaks," please take the Topography (or "Top-off-graphy") of Twin Peaks Guided Photo Tour, part of my Twin Peaks site.]

Relevant excerpt from the script after the jump. 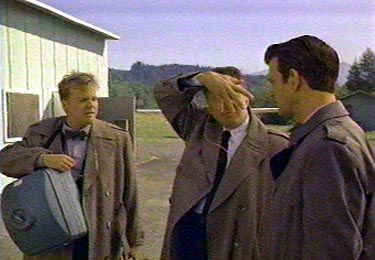 Kiefer Sutherland, David Lynch (behind hand) and Chris Isaak in "Twin Peaks: Fire Walk With Me."

From the original script of "Twin Peaks: Fire Walk With Me":

That was really something. That dancing girl. (after a beat) What did it mean?

Code. If you work with Gordon you learn that right away.

Code, I've heard a lot about this.

Desmond pulls his arm back so that only his fingers come out of his sleeve.

We're heading into a difficult situation.

How do you figure?

I'll explain it to you. Do you remember Lil's dance?

As Desmond explains we - INTERCUT WITH:

Lil was wearing a sour face.

What do you mean?

Her face had a sour look... that means we're going to have trouble with the local authorities. They are not going to be receptive to the FBI.

ON LIL BLINKING BOTH EYES

Both eyes blinking means there is going to be trouble higher up... the eyes of the local authority. A sheriff and a deputy. That would be my guess. Two of the local law enforcers are going to be a problem.

ON LIL WALKING IN PLACE

(continued) Lil was walking in place which means there's going to be a lot of legwork involved.

WE SEE COLE PUTTING HIS FINGERS IN FRONT OF HIS FACE AND SAYING LIL IS HIS SISTER'S GIRL.

(continued) Cole said Lil was "his mother's sister's girl." What is missing in that sentence? The Uncle.

Oh, the uncle is missing.

Not Cole's Uncle but probably the sheriff's uncle in federal prison.

So the sheriff had got an Uncle who's committed a serious crime.

Right, which is probably why Lil was wearing a red wig meaning we are headed into a dangerous situation. Let me ask you something, Stanley, did you notice anything about the dress?

The dress she was wearing had been altered to fit her. I noticed a different colored thread where the dress had been taken in. It wasn't her dress or she must have lost some weight.

Gordon said you were good. The tailored dress is our code for drugs. Did you notice what was pinned to it?

Very good, but I can't tell you about that.

Stanley rides along quietly for a while.

What did Gordon's tie mean?

Why couldn't he have just told you all these things?

He talks loud. And he loves his code.

I see. He does talk loud.