Faces in the crowd: Here's looking at you, Nashville

For some reason I have the notion that the guy with the camera, getting the low-angle shots of Barbara Jean (Ronee Blakley) against that American flag that stretches across the Parthenon from sea to shining sea, is the cinematographer Paul Lohmann. Is that right?

I didn't know it at the time, but 35 years ago the course of my life was set into motion. It began, no doubt, the previous summer with Roman Polanski's "Chinatown," followed the next June by Robert Altman's "Nashville." If those two movies -- seen at the impressionable ages of 16 and 17 -- don't thoroughly transform your world, then I don't know what would. I'd always loved the arts, but from that moment on I knew for certain that movies were the art form of the century -- my century -- because never before could such vibrant, kinetic masterpieces have been born. They made me feel fortunate to have come into the world just at the moment in human history when, at long last, such miracles became possible.

I'd never seen a movie so bursting and bristling with life, unless it was "Citizen Kane" -- but Welles' was a different kind of cinematic imagination, brashly injecting the artifice of theater and radio into cinema. "Nashville" was no less bold and splashy (with 24 of your favorite stars!), but it was as if the sides of the frame had been removed, opened up to admit whoever and whatever might wander through it. Robert Altman didn't seem to be looking at the world through a lens; his vision was so wide it took in all the world it could get.

Of course, that's the way "Nashville" was designed to feel, like the camera just happened to spot these people and these moments while roving around in the post-Watergate Athens of the South. You can meander all over inside the movie, too. I remember Scott Glenn talking about how the actors would be outfitted with wireless microphones and let loose in a crowd scene. Someone asked their director how they'd know they were on camera. You won't, Altman said. But if you do something interesting you might just wind up in the movie.

In a wonderful piece at Sergio Leone and the Infield Fly Rule, Dennis Cozzalio (who, by the way, did the English subtitles on the long-awaited 2000 Paramount DVD) appreciates "Nashville" at 35 for all the right reasons. Including the often-downplayed contributions of its cinematographer, Paul Lohmann:

"Nashville" itself is a spectacular example of a great movie in which a multitude of potent imagery and visual strategies are at work-- Altman's experimentation with the zoom lens and its ability to provide the illusion of gliding through multiple layers of conversation, a visual corollary to his pioneering work with six-track stereo sound, reached its zenith here. And yet the movie boasts only serviceable cinematography (by Paul Lohmann) which may have been a necessity of Altman's insistence on giving the film an immediacy it might have otherwise have lacked had it been more classically framed and shot. The movie does not have a visual style that calls a lot of attention to itself in terms we normally reserve to describe the beauty on display in a movie like "McCabe and Mrs. Miller" or the ethereal, otherworldly dread manifested for the eye by Charles Rosher in "Three Women," yet it is in its own way undeniably spectacular in a visual sense.

Yes it is. "Nashville" is absolutely beautiful, but it isn't pretty. It's grainy and flat (a product of the telephoto lens and the chem-wash system Altman and Vilmos Zsigmond had used on "McCabe"), and it sure doesn't feel composed. It's like a sweeping anamorphic documentary, a home movie of a (the) big parade (or the Zapruder film in Panavision), in which whatever you see simply depends on whatever direction the camera happened to be pointed in at the time. But things are going on all around, whether they're visible through the widescreen window or not.

Though "Nashville" is an outgrowth of work Altman did with Zsigmond (the lived-in feel of "McCabe," the endlessly floating/zooming camera of "The Long Goodbye"), in visual texture it is most like Altman's previous film, a smaller-scale masterwork (and the first of the director's three pictures with Lohmann) called "California Split" (1974). I don't mean any slight to the integrity of "California Split" when I say that, in retrospect, it can be seen as a rehearsal for "Nashville." (Lohmann went on to shoot "Buffalo Bill and the Indians, or Sitting Bull's History Lesson" with Altman; "High Anxiety" and "Silent Movie" with Mel Brooks; and other notable pictures such as "North Dallas Forty," "Time After Time," "Mommie Dearest" and "Endangered Species.")

The director of that last title, Alan Rudolph ("Welcome to L.A.," "Choose Me," "The Moderns," "Afterglow"), also deserves quite a bit of credit for the visual texture of "Nashville" as the assistant director for background action -- which, of course, in "Nashville" was often foregrounded with the zoom and/or the finely-tuned sound mix.

I have about a million favorite things in "Nashville" (I suppose that's why it remains one of my very favorite movie experiences), and I have no idea what Rudolph's contributions were, but I thought I'd take a moment here to acknowledge some of the faces I find myself staring at each time I see the movie. I don't know why -- maybe it's because they just look like people you might have seen (and may or may not have noticed) if you happened to be there, wherever that was, when Altman's camera caught them. Sure, they're extras, and somebody no doubt placed them in that spot for a reason. But speaking as somebody who not long ago took a look at "Nashville" by following one of its minor featured characters, Barbara Baxley's Lady Pearl ("String of Pearl: The Lady of Altman's Nashville"), I want to take an even finer-grained approach. This is a movie about the crowd, spectatorship -- about watching, and watching the watchers watch what they watch -- and these faces have become familiar acquaintances, like those kids you saw in the hallways at school but never really knew. One of the glories of "Nashville" is that you imagine the movie could have followed any of these folks and added their lives to the tapestry. As a wise man once said, god is in the details.

The shot above is about Wade (Robert DoQui) flirting with the blond and the brunette, but I can't help thinking about this John Candy-looking dude with the beer. Looks like he's there alone, probably a regular, who's there because he really digs bluegrass. Maybe he has a crush on Lady Pearl, the owner of the joint?

I don't know why, but this woman in the glasses and the white turtleneck sitting by Kenny (David Hayward) just nails this Grand Ole Opry audience for me. She's, I don't know, kind of a regular-looking lady -- not unlike, say, Albuquerque (Barbara Harris), according to her husband Star (Bert Remsen).

Is this guy -- discreetly placed in the second row of the powerhouse Protestant choir next to Haven Hamilton (Henry Gibson) -- a football player, a parking-lot dope smoker, or both? That face is the mid-1970s.

Yeah, that one -- the old coot in the Shriner's fez, front left, witness to Barbara Jean's (Ronee Blakley) breakdown at the showboat stage. I imagine him as one of the faces on the cover of the Dead Kennedys "Frankenchrist" album, too. He wasn't, but he should have been.

This lady in the red, white and blue-black is out of focus nearly all the time because she's sitting at a table in front of Linnea Reese (Lily Tomlin) as it becomes clear that Tom's (Keith Carradine) "I'm Easy" isn't about the other women who probably think this song is about them, but about her. In this shot, L.A. Joan, aka Martha (Shelley Duvall), right, turns around and the camera rack-focuses right past her to the back of the room. Which is basically what's happening to every woman besides Linnea in this scene.

Even the continuity irregularities in this movie add to its mystery and realism. This is the last shot of the movie (with cutaway inserted before the final, random tilt to the sky): Sueleen Gay (Gwen Welles), right, stands frozen and devastated, leaning against a column where she's both onstage and offstage -- a space she recently shared with her idol Barbara Jean, but not as she had envisioned. This is the spot where her dream died. When I see she's there in some shots and not in others, I just assume that the makers of this documentary have not edited the film in strict continuity. This simply means the editors chose to arrange the footage this way, leaving us to wonder when Sueleen actually left and where she went. 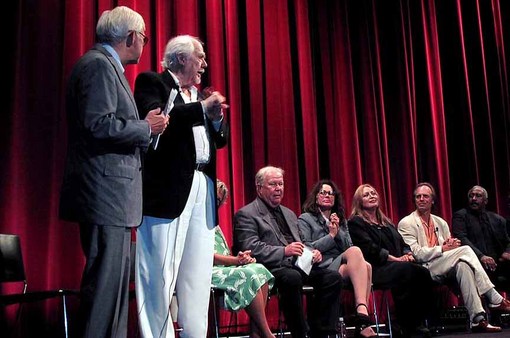 P.S. Holy cow, if "Nashville" is 35... that means it's been ten years since I attended the "Nashville 25" reunion at the Academy of Motion Picture Arts & Sciences' Samuel Goldwyn Theater in Beverly Hills -- one of the great nights of my life.