Ebertfest '07: "It's his happening and it freaks him out!" 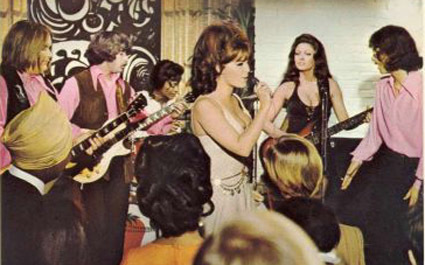 Supergroup: The Carrie Nations jam with the Strawberry Alarm Clock in "Beyond the Valley of the Dolls." The latter band will also perform at Ebertfest '07, after a screening of the film.

Set your Strawberry Alarm Clocks: The annual spring ritual of Roger Ebert's Film Festival in Urbana-Champaign (now in its ninth year) runs April 24 -29, 2007, at the gorgeous old Virginia Theatre. The name of the fest has always been rather flexible: "Roger Ebert's Overlooked Film Festival," "The Overlooked" (sounding like something from "The Shining"), "Ebertfest"... Next year, the event will been officially re-named: Ebertfest -- the Roger Ebert Film Festival.

The tradition of appreciating "overlooked" films (by any criteria Ebert chooses to apply) continues, however. The festival will climax with a closing-day screening of Russ Meyer's "Beyond the Valley of the Dolls" (screenplay by Ebert himself) and a live performance by the Strawberry Alarm Clock, the psychedelic rock band featured in the film (and in Jack Nicholson's 1968 "Psych-Out," as well).

Roger Ebert will be there, introducing the festival and watching the films with the audience, but because he's still recuperating from surgery, will rely on an "expert group of colleagues" to conduct the on-stage interviews this year.

The 13 films featured in this year's Ebertfest are listed below, with titles linking to Ebert's original reviews of the films, where applicable. Other blurbs come from the festival's official web site, where the complete schedule and details can be found: www.ebertfest.com.