Critics better love The Dark Knight -- or else! 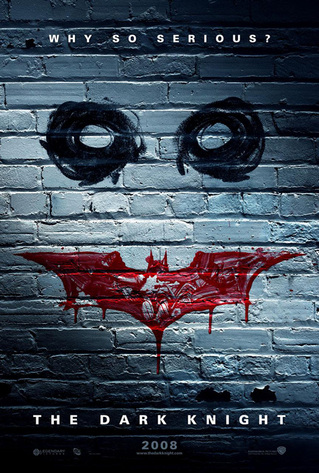 Success is no longer its own reward. At least not according to some partisans of "The Dark Knight." Fame, critical approbation, unimaginable riches, pop-cultural impact -- they are inadequate achievements. The picture must be showered with year-end awards consistent with the all-consuming Batmania of last July, no matter what else was released in 2008. Dammit.

Alarmed by what he deems insufficient obeisance to director Christopher Nolan's movie in annual honors announced so far (LA & NY crix, Golden Globules), Josh Tyler at CinemaBlend has been moved to issue movie critics an ultimatum: "Ignore 'The Dark Knight' at your peril." Actually, he issues several ultimata, in various forms, including this one, vague but menacing:

In any year, but especially in this, a particularly weak year, there's nothing out there which compares to "The Dark Knight." It must transcend your petty big box office biases since it has already changed the way we think about movies forever. It's more than the best movie of the year, it's one of the best movies ever made. Snub it and there will be consequences.

Yikes. So much for the integrity and diversity of critical discussion -- but what might those consequences be? Perhaps... death?!?!

The logic behind the threats, as near as I can tell, goes something like this: Most critics liked "The Dark Knight" (an 82 score, considered "Universal acclaim," at Metacritic, which tracks mostly mainstream print reviews). It was phenomenally popular (almost $1 billion in ticket sales worldwide). Therefore, critics who didn't like it are out of touch. But most media-consumers don't want to read reviews anyway (from in-touch or out-of-touch critics), so they are turning away from criticism to what Roger Ebert called "CelebCult" outlets, like CinemaBlend. (In a previous piece, "You Don't Care About Movie Reviews, Tyler wrote: "It's easy to call the media greedy and unprincipled, but to exist newspapers and websites must have an audience, and to have an audience you must give them something they want to read.") So, film criticism is dead because critics are losing their jobs, or possibly the other way around, because the audience that once made critics so popular does not want to read them anymore.

But back to "The Dark Knight": "Shortly before its debut in theaters, critics were hailing as one of the best movies ever made, a life changing experience," Tyler recalls. "It is, for a fact, one of the very best reviewed movies of the year." So, to conclude, dead critics who are not now hailing "The Dark Knight" as the greatest cinematic achievement of the year (or all years) are being inconsistent with what they may or may not have said earlier, and are thus sealing their own coffins. From the inside. Or they would be if they weren't already dead and buried and irrelevant and forgotten anyway.

It's more than just the year's best movie, it's also almost unquestionably going to be the year's most influential. Like "Star Wars" before it, "The Dark Knight" is fast becoming the new mold from which all future movies will be poured. Its impact, its influence on cinema will be felt for decades to come.

I'm afraid I must question both the hindsight and the foresight on display in this posting (headlined "Note to Award Givers: Ignore The Dark Knight At Your Own Peril"). True, I did find a quote from somebody at an Australian web site called Tsunami Magazine that said, "The Dark Knight is the best Batman film ever made, the best superhero movie ever made, and the best movie of the year to date" -- but I don't recall a mainstream critical consensus promising that it would wind up being everybody's Best Movie of the Year (when and if the End of the Year arrived), or that it ranked Among the Best Movies Ever Made. If that were indeed the case then we are living in a world where memory is what Guy Pearce's character experiences in Nolan's earlier "Memento." (I'm sorry: Does the term "earlier" have meaning in this context?)

As for the predictions, I can only wonder how "The Dark Knight" is "fast becoming the new mold from which all future movies will be poured," and what all movies will look like once they have been poured into it. For that matter, when after 1977 did all movies begin to resemble "Star Wars," which derived its cinematic sensibility from old Republic and Monogram serials?

For print critics, a vote against "The Dark Knight" is a vote for your own irrelevancy. It's a vote for the unemployment line. It's a conscious choice to ignore a cultural phenomenon in favor of pushing some undeserved indie-film agenda over a movie which people have already seen.

This reasoning strikes me as bizarre -- almost as bizarre as Patrick Goldstein's bewildering LA Times blog post about how "specialty film" publicists are afraid to have the New York Times' Manohla Dargis review their pictures. ("What causes so much fear and loathing in the filmmaking community about Manohla's work as a critic isn't her blunt appraisals but her seeming lack of empathy for the challenge of tackling difficult material," Goldstein writes -- as if a critic's job were to review challenges and intentions rather than the movie on the screen. Meanwhile, Goldstein casts himself as indie Hollywood's trusted inside media consultant at the paper: "The production chief of one indie studio once was so infuriated by a string of negative Dargis reviews that he vowed to keep Manohla away from all of his future screenings, even if that meant stopping all our critics from seeing his movies. I told him it was a bad idea, since it would simply make Manohla a hero to critics everywhere, further increasing her clout.")

Tyler implies that the function of a critic is to choose between cultural phenomena and "some undeserved indie-film agenda." Were those really the two (and only two) options weighed by the Los Angeles Film Critics' Association when its members narrowly chose "Wall-E" over "The Dark Knight" for best picture? (Nolan was runner-up to Danny "Slumdog Millionaire" Boyle in the director category, and Heath Ledger won for supporting actor.)

On the other hand, Goldstein suggests that critics ought to promote an "indie-film agenda" based on a guestimation of the makers' ambitions: "No one blinks an eye when a critic eviscerates a dumb summer comedy -- that's a fair target. It's the filmmakers who've aimed high and been brought to their knees by a Dargis pan who feel as if they've been gored for sport." Even if it were harder to make a film that "aims high" than it is to make a "dumb summer comedy" (it's not), why should critics or audiences care? Is a serious opportunity bungled any more worthwhile or entertaining than a frivolous one? Might a misconceived attempt at self-importance be more egregiously offensive and/or painful to watch than a routine genre picture? (Especially when the former makes pretentious and repetitious Thematic Statements without developing them?)

I don't think film criticism is dead. What makes me sad is that so few people even know what it is. But that's something that hasn't changed in 30 years.

P.S. In case you've forgotten, one of the best-written, most persuasive appreciations of "The Dark Knight" was written by Manohla Dargis herself:

A self-described agent of chaos, the Joker arrives in Gotham abruptly, as if he'd been hiding up someone's sleeve. He quickly seizes control of the city's crime syndicate and Batman's attention with no rhyme and less reason. Mr. Ledger, his body tightly wound but limbs jangling, all but disappears under the character's white mask and red leer. Licking and chewing his sloppy, smeared lips, his tongue darting in and out of his mouth like a jittery animal, he turns the Joker into a tease who taunts criminals (Eric Roberts's bad guy, among them) and the police (Gary Oldman's good cop), giggling while he-he-he (ha-ha-ha) tries to burn the world down. He isn't fighting for anything or anyone. He isn't a terrorist, just terrifying.

Mr. Nolan is playing with fire here, but partly because he's a showman. Even before the Joker goes wild, the director lets loose with some comic horror that owes something to Michael Mann's "Heat," something to Cirque de Soleil, and quickly sets a tense, coiled mood that he sustains for two fast-moving hours of freakish mischief, vigilante justice, philosophical asides and the usual trinkets and toys, before a final half-hour pileup of gunfire and explosions. This big-bang finish -- which includes a topsy-turvy image that poignantly suggests the world has been turned on its axis for good -- is sloppy, at times visually incoherent, yet touching. Mr. Nolan, you learn, likes to linger in the dark, but he doesn't want to live there. [...]

In its grim intensity, "The Dark Knight" can feel closer to David Fincher's "Zodiac" than Tim Burton's playfully gothic "Batman," which means it's also closer to Bob Kane's original comic and Frank Miller's 1986 reinterpretation. That makes it heavy, at times almost pop-Wagnerian, but Mr. Ledger's performance and the film's visual beauty are transporting. (In Imax, it's even more operatic.) No matter how cynical you feel about Hollywood, it is hard not to fall for a film that makes room for a shot of the Joker leaning out the window of a stolen police car and laughing into the wind, the city's colored lights gleaming behind him like jewels. He's just a clown in black velvet, but he's also some kind of masterpiece.