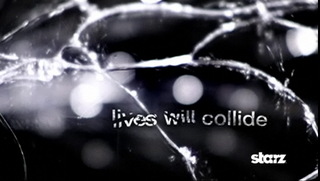 Test: Can you find something -- a shot or a cut or a line -- in this trailer for "Crash" -- The Dramatic New Original Series Only On Starz -- that isn't a howler of a cliché? Ready? Let's see, it begins with someone who sounds suspiciously like the late Don LaFontaine intoning:

"Everyone's chasing something. And when they find it, they want more."

And then (just like the movie) characters define themselves in didactic speeches. Maybe it's Brechtian. Sometimes they actually look into the camera and tell you who they are and what they "want." Those parts may have been shot just for the trailer, but the effect is very like the Academy Award-winning movie:

"I deserve their respect. As a cop. And as a woman."

"With that much cash you can buy your American Dream."

"I'm willing to cross a line."

"I have everything I need. And nothing I want."

"Don't you worry about my husband. I'll handle him."

"I have risked everything for a chance at a new life."

"That guy was stinking rich!"

"Since when do we rob our own?"

"From the producers of the Academy Award-winning film... comes the explosive new drama... that will take you to the edge... and, when you least expect it... Push... You... Over."

NOTE: For those who may be wondering about the title of this post: Like new Shimmer (and, for that matter, Ol' Fisherman's Sticky Pads and Vaunnies Mustardayonnaise and Stenson's Mayostard and Mundees Mustmayostardaionnaise), "Crash" now has two uses: It's a movie AND a TV show!