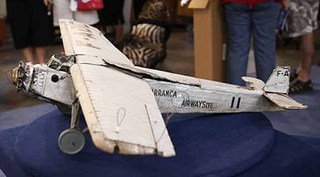 Do you recognize this Barranca Airways plane? I hope so. Because it's from one of my top-five favorite movies (and most personally influential of all time -- and one of the great classics of American cinema.

A friend sent me this picture, from an "Antiques Roadshow" episode. The seller was asking $250 and didn't even know he had...

... a treasured piece of movie history. From the "Antiques Roadshow" web site:

I found this in a swap meet in Southern California. It was part of an estate that was being sold at the swap meet and it was sitting on the ground. And it had a handwritten note on it that said, "movie prop." So I got down on my knees and looked at it, and I determined by looking at it that I agreed that it was a movie prop. So I asked the gentleman who was selling what movie it was from, and he told me a title that I believe was "The Wings of an Angel." That movie, or that title, did not match up to any movie that I was familiar with."

Yep. It's a plane from Howard Hawks' 1939 "Only Angels Have Wings" (my choice, alongside Hitchcock's "North By Northwest" and George Cukor's "Holiday," for the most sheerly entertaining movie I've ever seen -- and it doesn't hurt that all three are masterpieces, and that the latter two profoundly shaped my ethical worldview). Indeed, it appears to be Joe Souther's plane! -- though the tail flap has broken off. (It's treacherous going over that pass.) 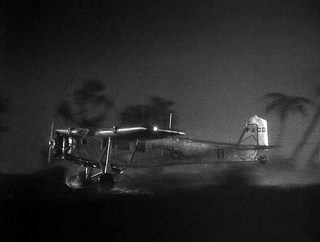 As my then-classmate Robert Horton writes in his Amazon.com capsule review for the film, although Hawks's "feel for action was crackling, he was really more interested in the way people exchanged sidelong glances or lit each other's cigarettes -- there's a lot of both in 'Only Angels Have Wings.'" (Some dismiss Hawks's concern with a community of professionals, often men without women, as mere "macho posturing," too. The hell with 'em.)

I first saw "Only Angels Have Wings" in one of Richard T. Jameson's film classes at the University of Washington. I seem to remember him or Kathleen Murphy showing it a few years later and telling us to pay particular attention to the shot below, because it was the thrilling antithesis of the "Top Gun" aesthetic that was newly in vogue at the time. Watch this -- two brief sequences (separated by a blackout I've inserted): a landing (in one of the most breathtaking shots in all of movies) and a take-off from the same mesa. I've made a couple of quick elisions in the first segment to focus on the actual flying footage. The story (well, legend) is that Hawks himself piloted one of the planes: