'Breaking and Entering' (It's a metaphor) 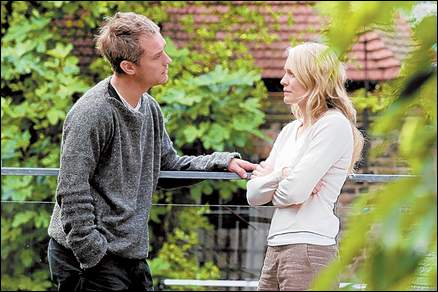 So, Jude Law says to Robin Wright: "Maybe that's why I like metaphors."

My review of Anthony Minghella's "Breaking and Entering" is in the Chicago Sun-Times and on RogerEbert.com:

The title of Anthony Minghella's dour "Breaking and Entering" is a metaphor. How do we know this? Well, for one thing, there's a burglary right at the start.

And the central character himself, Will Francis (Jude Law), demonstrates a fondness for metaphors in his dialogue. He's so fond of them that he even tells us he is fond of them in a climactic speech: "I don't even know how to be honest anymore. Maybe that's why I like metaphors." Then he goes on to describe a metaphor, where a circle represents his family, but it's also an enclosure or a cage, and he wants to feel comfortable in it but sometimes he feels trapped in it and sometimes he feels excluded from it. [...]

In the press notes, Jude Law spells it out: "The argument is: Is it worse to steal somebody's computer or is it worse to steal somebody's heart?" That's not even a decent metaphor (although, to be fair, the film is not about organ theft). It's simply an algebraic formulation: a > b or b > a, where "a" is "computer," "b" is "heart" and the nature of the relationship is "worse"?

Expressed in those terms, "Breaking and Entering" Full review at RogerEbert.com