Bow down to Babs 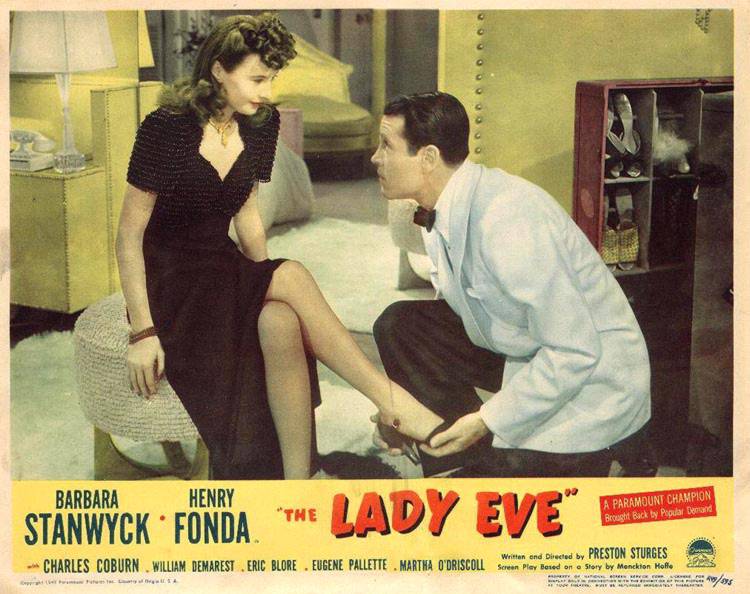 "You're certainly a funny girl for anybody to meet who's just been up the Amazon for a year."

If you are in Chicago the next few weeks, and you feel like taking in a weekend matinee, then you are fortunate indeed because the Music Box Theatre is presenting a centennial celebration of the toughest, sexiest, smartest, snappiest dame ever to sashay across a cinema screen. By that, of course, I mean none other than Sugarpuss O'Shea, Phyllis Dietrichson, Lily Powers, Lora Hart, Stella Dallas, Jean Harrington, Jessica Drummond, Leona Stevenson, Sierra Nevada Jones, Martha Ivers, Thelma Jordan, Norma Miller Vale, Mae Doyle D'Amato... in other words, Barbara Stanwyck. 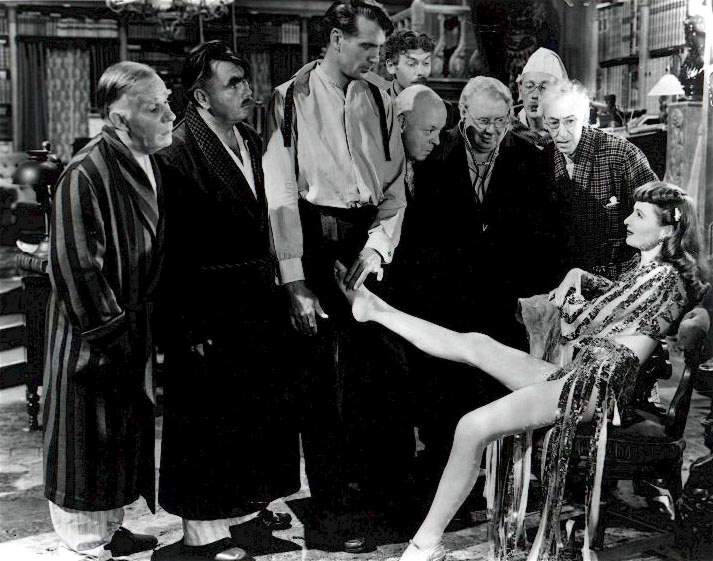 Sugarpuss presents the ball of her foot in "Ball of Fire."

Stanwyck is my favorite movie actress. Ever. I built a virtual shrine to her in 1998 (complete with a gallery of rare images and Babs' Foot Fetish Page), in which I wrote:

Stanwyck could make you believe she was part of the everyday world we all live in, not just a fantasy on the silver screen. She could easily be the woman down the aisle in the supermarket, driving that car in the next lane, or working in the office down the hall. While other stars went for the "larger than life" roles, Stanwyck -- as an all-American working girl or a cunning seductress -- generally kept her feet planted firmly on the ground. In fact, she enters "Double Indemnity" feet-first, sauntering down the staircase wearing an anklet that snags Walter Neff (MacMurray) by the libido. (The anklet may be the hook, but she's the bait.) Stanwyck used that foot to lure Gary Cooper and Henry Fonda, among others. It's a peculiar erotic pattern in her work (see Babs' Foot Fetish Page for more details and images), but men who stooped to take her foot in hand found themselves on their knees before a passionate woman, not an unapproachable goddess -- and they fell, instantly and irrevocably, under her spell. (Fonda almost faints when she gets him to slip a pump over her tootsies!) 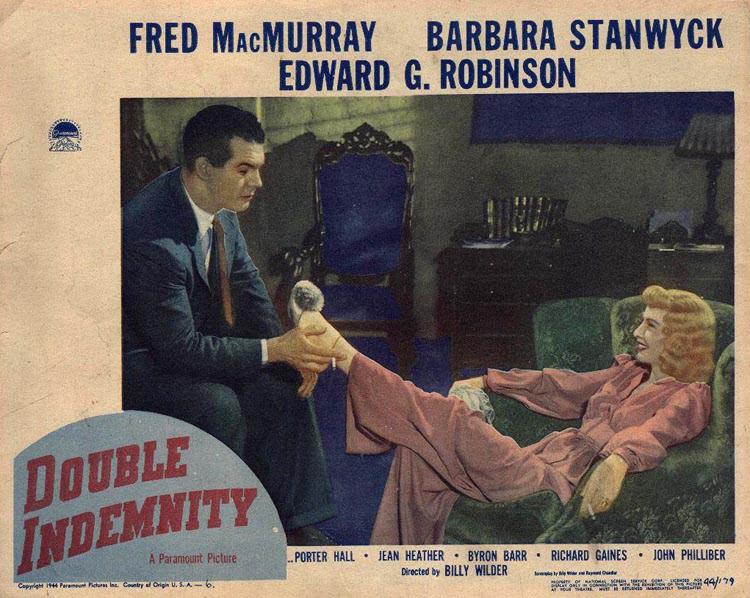 Will this plan provide full coverage?

In both "The Lady Eve" and "Ball of Fire" -- two of her most dazzling and endearing comic performances, from the same year! -- Stanwyck acts as a leveling life-force, puncturing all pretensions and knocking her co-stars' bumbling intellectual noggins out of the hazy cerebral clouds. What she achieves is not unlike what a much ditzier, flakier, upper-crust screwball heroine, Katharine Hepburn, does for/to bespectacled paleontologist Cary Grant in "Bringing Up Baby." But Stanwyck brings salvation from the streets rather than the penthouse. Jean Arthur in "Easy Living" (1937) -- written by Sturges -- is a delightful working gal, but Stanwyck is far more streetwise. Tough, strong, and smart, but no less feminine than some of her screwball sisters, she has learned to survive in a cut-throat world, living by her wits. She's at her best when she's in control, and she usually is. In many of her most famous movies the unspoken truth of any given scene is that she knows exactly what she's doing -- until, perhaps, her emotions sneak up on her and overthrow her instincts, by unexpectedly allowing her to fall head-over-heels for her (relatively) naive and helpless male prey.

Stanwyck slices right through class conventions and social formalities, immediately addressing Gary Cooper's Professor Bertram Potts by the more casual nickname of "Potsy." Likewise, Fonda's Charles Pike, heir to the Pike's Ale fortune, becomes "Hopsie" (after a key ingredient in the family brew). The very notion of someone with such a direct, spontaneous, and unrefined disposition masquerading as a blueblood is, as Preston Sturges realized, a terrific premise for comedy.

In "Ball of Fire" (directed by Hawks and written by Billy Wilder and Charles Brackett), Stanwyck's Sugarpuss O'Shea, gangster's moll and nightclub singer decked out in a dress that produces spontaneous fireworks, unceremoniously thrusts her cold, damp foot at befuddled Professor Potts in an attempt to persuade him to let her spend the night. (She's hiding from a supoena; he's cloistered in a big house with a team of elderly academics, working on an encyclopedia article about American slang. Think of it as "Sugarpuss and the Seven Fuddy-Duddies.")

When one of Potts' fellow eggheads acknowledges a "slight rosiness" in her throat, she cracks: "Slight rosiness? It's as red as the Daily Worker and just as sore!" Turns out that Sugarpuss (as suggested -- among other things -- by what W.C. Fields would call her "euphonious appellation") is bursting with such vividly expressive language. Soon, she's sweetening the stale, academic air with her colorful lingo, inviting Potsy to feel her cold feet while melting his heart.

The clichés of conventional (screen) romance are too sappy, too corny (and probably too oblique), for Stanwyck's heroines. By being so forward, so daringly "earthy" and cutting through fuzzy romantic illusions, she forces her men to see and appreciate the living, breathing woman in front of them. In one of the funniest and most erotic scenes in movie history (all played out in a tight two-shot), Stanwyck's "Lady" Eve teasingly and seductively demolishes Fonda/Hopsie's safely abstract fantasies about the "ideal" woman he thinks he's never met and makes him face reality: "How are her teeth?" she quizzes him. "Well, you should always pick one out with good teeth. It saves expense later." Her own fantasy mate, she confesses, is "a little short guy with lots of money." "Why short?" asks Hopsy. "What does it matter if he's rich?" she explains. "It's so he'll look up to me, so I'll be his ideal." She's so pragmatic.

Barbara Stanwyck herself may have been the least idealized or glamorized of Hollywood's great leading ladies, but she's certainly someone to look up to. That scene from Sturges' incandescent "The Lady Eve" shows her in top form; it's just the sort of deliciously sly, double-edged material that she could bring to life like no one else. She was never more beguiling than when feigning conversation about some subject (whether dental hygiene or a sore throat or the speed limit) while the light in her eyes and the tone of her voice pierce right through the rhetorical smokescreen and speak directly, alluringly, of sex.

In most cases, that's seen as a healthy quality; but not always. At the climax of "Double Indemnity," Walter Neff (Fred MacMurray) finally sees through Mrs. Dietrichson's deceptions and blows it back in her face. "Just like the first time I came here, isn't it?," he says, perching again on the arm of the couch in her shadow-streaked, spider-web living room. "We were talking about automobile insurance... only you were thinking about murder." Indeed, from the moment they meet, these two flirt by speaking in suggestive riddles. Stanwyck appears at the top of the stairs, wrapped in nothing but a towel, when MacMurray's insurance salesman comes calling about an expired policy: "The insurance ran out on the 15th. I'd hate to think of your having a smashed fender or something while you're not, uh... fully covered." "Perhaps I know what you mean, Mr. Neff," she replies. "I've just been taking a sun bath." Neff is a sucker in heat, another man doomed by his indiscriminate lust. But you can't fault him too terribly for his weakness. When smoldering Stanwyck cranks up the temperature, even the coolest of cucumbers has been known to break a sweat.

She's willing to let him have the last word this time, because she already knows she's got him by the gonads -- right where she wants him. So, for now, she releases him into the stifling heat and honeysuckle-scented air of another long Los Feliz afternoon. She knows he'll be back....