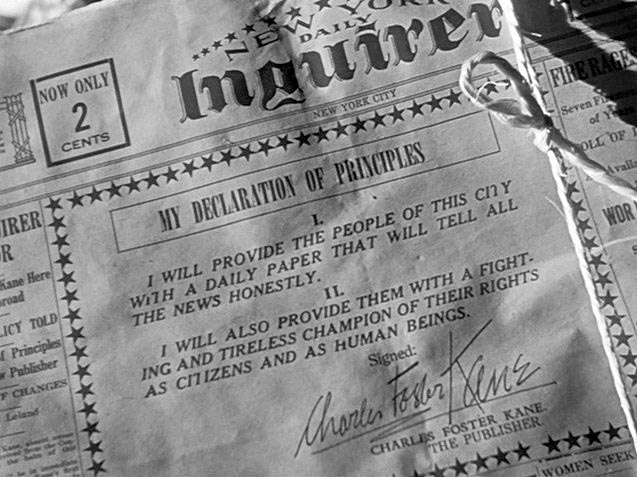 Or, maybe, a Notice of Recurrent Themes. Or The Bordwell Manifesto?

No, David Bordwell and Kristin Thompson don't really call it a "Declaration of Principles." But, in recognition of their first blogiversary at on their invaluable blog, Observations on film art and Film Art, David looks back over what they've done in the last year, and notices some "recurrent themes":

*In keeping with the blog’s title, we emphasize film as an art form. More specifically, we’re especially interested in how structure and technique work together, which few blogs outside the industry do.... [We] incline toward somewhat finer-grained analysis of cinematic storytelling, even if that means going shot by shot. If we want as well to make an evaluation of the film, as we sometimes do, we then have some concrete evidence to back it up.

*We also treat film art as tied to film commerce—both the mainstream industry and the less-acknowledged form of commerce known as film festivals. We’ve always believed that there isn’t necessarily a battle between film as an art form and “the business.”...

*We’re happy to find that a lot of filmmakers read and link us. One of the purposes of "Film Art" was to show how artistic expression in cinema is tied to practical decisions made by filmmakers; that’s why we begin the book with an overview of the process of film production....

*We’ve tried to deflate some clichés of mainstream film journalism. Writers of feature articles are pressed to hit deadlines and fill column inches, so they sometimes reiterate ideas that don’t rest on much evidence. Again and again we hear that sequels are crowding out quality films, action movies are terrible, people are no longer going to the movies, the industry is falling on hard times, audiences want escape, New Media are killing traditional media, indie films are worthwhile because they’re edgy, some day all movies will be available on the Internet, and so on. Too many writers fall back on received wisdom. If the coverage of film in the popular press is ever to be as solid as, say, science journalism or even the best arts journalism, writers have to be pushed to think more originally and skeptically.

*There’s the theme we might call the continuing presence of the past. I notice that many of our entries comment on a current event or topic by showing that it has parallels and precedents in earlier periods of film history.... Rather than celebrating apparent innovation, it’s more exciting to see how filmmakers connect to tradition, shaping it in ways that even they might not be aware of doing. We tend to see the present through a narrow window, but historical awareness widens and deepens the view....

Bravo, and nobody does it better. Congratulations David and Kristin on a stellar first year.

Next Article: Words and music Previous Article: The Golden Age of Cinemania is Now

The Golden Age of Cinemania is Now