Blu-ray: Higher fidelity to what? 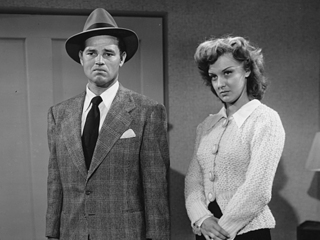 The announcement of a pristine, digitally enhanced Blu-ray release of Edgar G. Uhlmer's grimy 1945 noir "Detour" got me thinking in granular terms...

The first CD I ever bought was Ennio Morricone's soundtrack to Sergio Leone's "Once Upon a Time in America." I had hundreds (thousands?) of LPs by that time, but it was the first thing I got on CD -- because of the dynamic range of the music and the recording, and the really quiet passages that always showed off the flaws in the vinyl pressing (rumble, ticks and pops from imperfections, static, scratches, dirt, etc.), no matter how careful you were with the record. There was a vinyl shortage in the 1970s, and most American records sounded terrible. Vinyl was mixed with cheaper plastics and additives (don't get me started on RCA Dynagroove), LPs got thinner and less uniformly flat, contaminants (like bits of label from recycled records) got pressed right into the grooves... I got used to the idea that I'd have to take back one out of every three or four records I bought for audible -- and often visible -- defects.

I almost forgot why I brought that up. Oh yes, it's the lead-in to this lead-in: In the early days of CDs, my friends and I used to joke about the idea of the Sex Pistols' "Never Mind the Bullocks..." appearing on little silver discs. The notion was so absurdly anti-punk: High-tech hi-fi did not show high fidelity to a DIY aesthetic. Today, of course, the means of production are in the hands of the workers and it's far, far cheaper to make CDs than cassettes or LPs -- and cheaper to burn DVDs than to record multiple VHS tapes. Still, the silver platters have multiple advantages (capacity, menu structures, programmability) beyond their quality of reproduction. You don't have to make high-resolution recordings in audio or video; it's just an option.

It would be a mistake to "clean up" the noise of some kinds of music, just as it would be counter to the spirit of, say, John Cassavettes (or Ed Wood) to create digitally pristine copies of their grittier work for Blu-ray release. A movie that was shot in 16 mm or on grainy stock for low-light conditions looks that way because... that's the way it was made. It's part of the work itself, integral to the experience the filmmakers created. Is it a good idea to "restore" ("remodel" is more apt) a movie to look brighter, sharper, clearer than it ever was before? Ask Owen Roizman, who shot "The French Connection" and was "appalled" by director William Friedkin's colorized (in the Ted Turner sense) version for the Blu-ray release. Friedkin says he likes this new look (stripped back to black and white, then layered with oversaturated color) better. Roizman said, "It's not the film that I shot, and I certainly want to wash my hands of having had anything to do with this transfer, which I feel is atrocious."

I've seen Blu-ray transfers that are gorgeous, but they don't look anything like any print of the title that I've ever seen. Is that a good thing? I guess it depends on what you want. If you want the boldest picture you can get on your home video equipment, then you're going to like images that makes your eyes pop. And you're probably going to want to watch new releases, whereas most of the movies I think are worth having were made in the previous century. (I began sitting in the front rows of theaters because I feel it is a more immersive experience, to use currently fashionable jargon. I wanted to see the emulsion. Now there is no emulsion to speak of, but one truth remains: The farther back you sit, the smaller the picture gets.)

On the other hand, if you want something that resembles a professional theatrical projection of a good 35 mm print, then you might find the DVD mastering preferable. What's with this soft, gloomy, hazy, desaturated "McCabe and Mrs. Miller"? What were Robert Altman and Vilmos Zsigmond thinking? Let's strip away that grunge to make it look shiny and new! That'd be like remixing the Sex Pistols to sound like Fleetwood Mac.

Oh, and in case you didn't click on the link above, that bit about the Blu-ray release of "Detour" was an April Fool's joke from the folks at DVD Beaver.