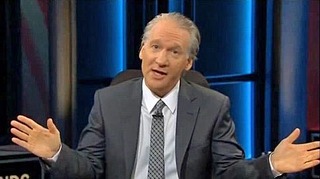 "Remember during the campaign when John McCain attacked Obama for acting like a celebrity and we all laughed at the grumpy old shellshocked fool? Well, it turns out he was right. [...] It's getting to where you can't turn on your TV without seeing Obama."

What grumpy old shellshocked fool said that? It was comedian Bill Maher, whose approach to political satire is to talk about televised presidential photo ops as if they were interfering with, or substituting for, policy-making. I mean, the guy admits he thinks what he sees on TV is "news," and then he watches PR puff pieces about presidential puppies and romantic nights out on Broadway and thinks it's Obama who lacks substance? Turn off the boob tube, Bill, and read a newspaper or a web site -- or a blog. If you wanted to learn something about politics (and "topical humor") from TV, you should be watching Jon Stewart or Stephen Colbert, not Leno. But I warn you, it's going to make you feel as tired and ancient as your schtick. You may as well be telling jokes about airline food and Geritol. (Anybody remember Geritol? That's my point.)

Maher is fresh off an Abbot & Costello tour with his old "clubbing buddy" (and TV show semi-regular) Ann Coulter. Their routine is that they take diametrically opposed "political" stances (he's ostensibly a libertarian and she's a proud McCarthyite), but they share a fundamental set of values, a common vision. Both see politics as primarily an avenue for stupid insult humor. They do for "political jokes" what Don Rickles did for "race jokes."

Maher recently recycled a lame TV monologue into an LA Times op-ed (or vice-versa). That's where the quotation at the top came from. Here's another bit:

"I mean, selling the personal part to stay popular, I'm all for it, but you got us already. We like you, we really like you! You're skinny and in a hurry and in love with a nice lady. But so's Lindsay Lohan. And like Lohan, we see your name in the paper a lot, but we're kind of wondering when you're actually going to do something."

Ah, don't you love a Sally Field joke from 1985? The key moment, if you watch the YouTube clip above, is the cutaway to a frighteningly inhuman and uncomfortable Chris Matthews (of "Hardball"). Both these guys are in the same business, and both contribute to the illusion that the trivial harangue is a proper form of public "debate." It's not their fault, exactly, but they help lower the bar for everybody. If Stewart or Colbert had made some of these observations they would have been making fun of the media's obsession with such trivia and the public appetite for it -- not simply viewing politics as a TV reality show, as Maher does.

Maher likes to appear "smart," like he has something of substance to tell you. And you know he's "edgy" because he'll often shake his head and preface a remark with, "I'm sorry, but..." -- and he'll scowl when he gets to the "serious part," like he's really leveling with you. But here he is, using silly Obama photo ops to imply that the six-month-old administration has not accomplished anything yet. You have to pretend you're an idiot to accept his premise. (Oh, where was Bill Maher during the Kennedy administration! We could have so used his perspective then!) Maher also seems to think the best way to get things done is to have the president out front on every issue, which is not Obama's M.O. -- often for very good reasons. (See this and this about the wisdom of pointing the way and then deliberately hanging back a little so that a process, or the enthusiasm of constituents, fills the gap and takes the lead. I'm mystified by the strategy behind some positions, but we're not seeing the carelessness and ineptitude we saw at this point in the previous administration. [Two words: stem cells.] It's still way too early for disappointment. But nobody's forgetting he has yet to deliver on many of the campaign promises that got him elected. UPDATE: See "Media Meme: #ObamaSTALL.")

Sure, Maher is just doing late night TV comedy, but the LA Times printed this last monologue as an op-ed! In the last few days I've heard people talk about this bit as if it were something meaningful and substantial. Yeah, Bill Maher really gave Obama a piece of his mind! Scathing! Brave! Devastating! (Look at the YouTube clip title: "HBO's Bill Maher Takes On President Obama.") Wow. A libertarian TV comedian made some jokes about the president going on TV too much! Then he said: "Sorry, folks, but this president is not fighting for real health care reform." Bill said so! And he says it so convincingly, in the tone of a stern lecture by your junior high school teacher. (If there's anything I dislike more than Maher's pseudo-political material it's his hectoring, condescending delivery, a relic of the "politics of personal destruction" years.)

And that's always been the problem with Maher (and Coulter and Matthews and O'Reilly and Dennis Miller and Chris Rock and...): they're celebrities who make their living talking about politics in terms of celebrities and believing that means their opinions qualify as social commentary. (As you know if you've seen Maher's painfully dumb anti-religious diatribe, "Religulous," Maher also thinks religious humor is similarly superficial and lowbrow.) To Maher, the president -- any president -- will always be seen as a caricature, the Celebrity-in-Chief, and the government comes to a halt whenever he goes out on the White House lawn to play with the family puppy.

UPDATE: OK, in case I went too far afield in the above post (which, I hope you'll notice, contains NO POLITICAL CONTENT whatsoever -- does anyone notice that kind of thing anymore? -- but is entirely about the real-world premises of Maher's jokes, here's kind of a Twitter-esque summary, repurposed from the comments below:

Brad: Jim, I'm baffled here. Maher is simply saying more bold strokes and less image-honing, please. You don't feel like that at least a little bit? C'mon now. If you want to vent about Maher at least use one of his less sensible spiels as a jumping off point.

JE: And I'm simply saying those two things have nothing to do with each other and that Maher ought to know better, especially if he's attempting to target adults with his material. Want bold strokes? Great! But don't pretend that TV photo-ops are what's preventing Obama from making them. That's just dumb comedy.

P.S. I went into more detail about Maher's comedy in my Toronto post about his movie "Religulous." That link takes you to the article.

But he kids. You laugh? Or you wince? Is Maher a leftover of the Clinton and W. eras? Does his insult humor work under Obama, who doesn't play those games? What happens when the administration is smarter than Maher is? Obama still screws up, but does Maher understand what's going on? So, am I wrong, folks? Or is Maher a "tell-it-like-it-is" genius who criticizes "both sides" -- you know, like FOX?