TIFF 08: The Divine and the "Religulous" 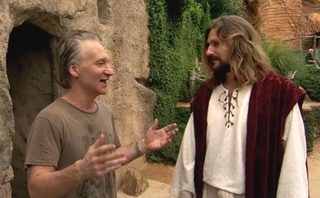 The only real blasphemies in Bill Maher's anti-religion documentary, "Religulous," are that it's not terribly smart and only sporadically funny. Three or four big laughs, a lot of snide, pompous misfires and innumerable fish-in-a-barrel potshots do not make for much of a movie, or a coherent case against the incoherence of faith or organized religion. Maher's line is that he is pro-doubt, that he really "doesn't know," that he's "just asking questions." That's a load of crap (he's not really promoting doubt any more than anti-abortionists are "pro-life"), but what makes it offensive is that Maher's smart-ass tone sounds as dead-certain, smug, smarmy and self-righteous as Jerry Falwell or Ted Haggerty.

When a movie that haughtily inveighs against End Times fervor concludes with an apocalyptic montage of blood, violence and mushroom clouds, that's plain, old-fashioned hypocrisy on an epic scale. Yeah, it's supposed to be frightening -- to really make you think, you know. But it doesn't because it's just another portentous scare tactic of the sort you might hear from any angry-hysterical preacher. (Much of his material is lifted, and watered down, from Sam Harris's "The End of Faith.") There's Maher, shot from below against the sun (if there's irony here, I don't think the filmmakers know it), laying down his own commandments, delivering his climactic fire-and-brimstone sermon by railing sanctimoniously against the evils of intolerance, and the evils of tolerance of intolerance, and... he's tripping out on his own dire visions of Revelation as much as any wacko cleric. 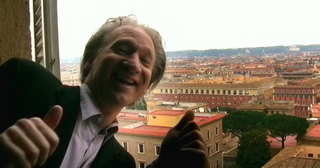 "Religulous" (a neologism of "religious" and "credulous" that maybe sounds like "ridiculous," I think) is Maher at his worst, condescending and self-aggrandizing. Directed by Larry Charles, it adopts roughly the same format as "Borat" (staged "conversations" and ambush interviews, pieced together with travel footage of Maher talking and driving). And it's guilty of almost all the sins "Borat: Cultural Learnings of America for Make Benefit Glorious Nation of Kazakhstan" was accused of but did not commit. Some of the interviewees clearly know who Maher is, so he's not putting anything over on them in that sense. But he doesn't let them talk, either. Instead of drawing them out, he cuts them off. At least Borat was genuinely interested in what people had to say, giving them plenty of rope with which to hang themselves. Maher can't resist interjecting his snide little zingers and then glancing at the camera for approval.

Take, for example, the anti-Zionist Hassid who was one of several Orthodox Jews (of the small Neturei Karta sect) to attend the Iranian "Holocaust denial" conference. I really wanted to hear this guy try to justify his point of view, but Maher keeps deflecting and interrupting him, so that mostly he just splutters, "Let me finish! Let me finish!" What he does say is that he doesn't think the Holocaust justifies the formation of Israel, and he does not believe that God gave the Jews this land for all eternity. Why? We don't know. Maher (who was raised Catholic although his mother is Jewish) gets in a few Jew-killing jokes and then walks out on his own interview in a theatrical huff. It doesn't play. Maher's stunt is merely a calculated piece of phony drama, delivered with a sly wink to the audience.

Other interviews are peppered with mocking subtitles or aren't-we-clever cutaways to zany old biblical epics. Which is not to say that there isn't some solid research and information on display here, just that most of it isn't well displayed. Still, I'm intrigued that, even in perhaps the most religious nation in the modern world, 16 percent of Americans are non-religious -- a larger minority than Jews, African-Americans or many other politically influential segments of the population. And yet, in this country founded on the principle of keeping religion and government independent, how many of our elected officials are openly atheist or agnostic?

In a too-brief interview, a cleric from the Vatican observatory explains, with considerable wit, that science and religion are two very different things and that one cannot be used to justify the other. How can scripture be said to have been based on science (the Adam and Eve chronology of history, for example) when the scientific method would not be invented for hundreds of years?

That's the good stuff. "Religulous" is guilty of the same kind of distorting selectivity that Maher (rightly) accuses religion of promoting. He criticizes a controversy-courting British Muslim rapper, Propa-Gandhi (Aki Nawaz), for hypocritically advocating "dissent" while refusing to condemn the fatwa against Salman Rushdie. The movie shows some of Propa-Gandhi's incendiary videos extolling the virtues of suicide bombing, but doesn't quote even a line from Rushdie's "The Satanic Verses" to give the audience any idea of what that was all about. There's a double standard here, and in the movie's sanitized portrayal of murdered filmmaker Theo Van Gogh's more outrageous, even anti-Semitic, views -- while, at the same time, criticizing the Dutch for being too tolerant and Islam for being too intolerant. My point is that if you're going to make a case for dissent and free speech, you can't pick and choose. Nobody should be subjected to death threats or assassination for anything they say or write or film -- but their views shouldn't be bowdlerized or censored, either. It's not free speech if it only protects speech that we feel comfortable with.

(Unfortunately for us all, Maher seems to view himself as a First Amendment Martyr, after his post-9/11 comment about how President Bush's term "cowards" was not appropriate or sufficient to describe murderous suicidal religious fanatics who flew planes into buildings. His network TV show, "Politically Incorrect," was canceled not long thereafter, and he makes sure that we never forget that. He spoke a self-evident truth in a scary, difficult time and was crucified for it -- along with Susan Sontag and many others -- but the holier-than-thou act has gone really stale and sour over the last seven years.)

I think the best moment in the movie comes when Maher interviews a non-collar-wearing priest just outside Vatican square. What can you say to get people to see the truth? Nothing, the priest says, they'll just have to live and die with their dumb beliefs.

Amen. For a movie that strikes out at dumbness and narrow-mindedness, "Religulous" too often stoops so low that it practices what it preaches against.