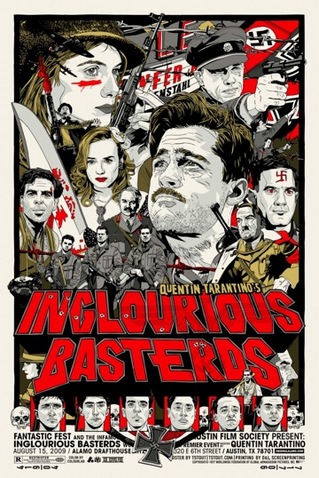 Laird Jimenez, Thomas Swenson and staffers at Seattle's famous Scarecrow Video have put together a list of movie references and influences they have found in Quentin Tarantino's "Inglourious Basterds." In the introduction ("Before They Were Basterds, Jimenez opines that "IB" is perhaps Tarantino's "most deft handling of reference and homage yet.... Some of these films are directly referenced in the film, others are only evoked, while others still are films we simply felt should go on the list."

Battleship Potemkin Eli Roth watched this for inspiration before making the "Nation's Pride" film within the film, and the famous gunshot to the eye image appears recreated in "Nation's Pride."

Le Corbeau Shows at Shosanna's theater, Le Gamaar. A classic anti-collaborationist satire from director Clouzot. This film got Clouzot in trouble with the resistance and the Reich.

The Guns of Navarone A seminal men-on-a-mission classic.

Hangmen Also Die "When I was writing the script for "Inglourious Basterds," I ended up looking at a different type of war film than I'd ever watched before. These were the propaganda movies made in the '40s, mostly directed by foreign directors living in Hollywood because the Nazis had occupied their home countries, like Fritz Lang with "Hangmen Also Die." What's really interesting is that WWII was going on, the Nazis were an actual threat, not a theoretical threat, not just movie bad guys. Those directors, in most cases, had personal experience with the Nazis, and obviously they had to be worried about their loved ones back home. And yet those films are entertaining, they're thrilling adventure stories, and oftentimes they're quite funny, there's a lot of humor in them. And this goes against all the ponderous, anti-war, violin-music diatribes that we've seen in war movies since the '80s." -- Quentin Tarantino

Men in War A good Aldo Ray war movie. [JE: Specifically, a classic platoon movie, directed by Anthony Mann. You can hear it in the Firesign Theatre's "Don't Crush That Dwarf, Hand Me the Pliers," too.]

Sabotage During narrator Sam Jackson's explanation of the flammable properties of nitrate film, a clip from this Hitchcock picture is briefly shown of a kid trying to board a bus with a film print. The conductor denies him entry for safety reasons. If you watch the film you will be aware of the fact that, unbeknownst to any of the characters, the kid is actually carrying a ticking time bomb.