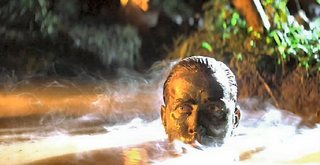 The communal Parallax View film criticism blog, coordinated by Sean Axmaker, has resurrected Richard T. Jameson's provocative, penetrating "Apocalypse Now" review, originally published in the Seattle Weekly (then known only as The Weekly) October 17, 1979. I think it's the most lucid thing anyone's ever written about the movie, and should be required reading after every screening as a way of ensuring substantive discussion.

Jameson's piece illuminates essential truths about "Apocalypse" (and, I think, about Coppola's body of work), with a precision few critics have been willing or able to explore. You may want to argue with it (and by all means go ahead!), but if you read it closely I think it will show you things you may already have felt, even if you never quite noticed them before. That's true for me, anyway. I've just re-read it for the first time in almost 30 years, and I feel it's been there, under my skin, the whole time:

"Apocalypse Now" is a dumb movie that could have been made only by an intelligent and talented man. It pushes its egregiousness with such conviction and technical sophistication that, upon first viewing, I immediately resolved to withhold firm judgment until I'd seen the film again: perhaps I'd missed some crucial irony, some ingenious framework that, properly understood, would convert apparent asininity to audacity. I didn't find it. It isn't there. What is there is the evidence of a reasonably talented filmmaker having spectacularly overextended himself -- Francis Ford Coppola who, having had a toney pop epic widely accepted as great cinema, felt he was ready to make "Citizen Kurtz."

It just may be that Francis Ford Coppola is not a stylist at all. He has a good eye, he composes his frames and shot sequences with intelligent purpose, and certainly he inspires a steely concentration in his actors (he needs more from them than most directors do); but he is a one-thing-at-a-time director. A given shot makes a single, clear statement. There is no resonance--although there is sometimes a built-in interpretation of the statement that is foregrounded so deliberately it can't resonate.

This is true even of his American art film "The Conversation," a movie that seems to explore the ambiguity of media (as ["Citizen Kane"] does in spades). But whatever ambiguity it possesses is a function of the screenplay, not the direction. The central set-piece -- the conversation recorded by several microphones, played back a dozen times, filtered, synthesized, and also revisualized (presumably in the mind's eye) from a multiplicity of camera angles till it yields sinister, contradictory meanings--is fine as suspense stuff, but it's ambiguity-by-the-numbers... [...]

Damn that's good -- and it crystalizes more completely than I ever could my ambivalent responses (visceral, aesthetic, intellectual) to every Coppola movie I've ever seen. With the possible exception of "The Godfather, Part II," the closest I believe Coppola's ever come to epic storytelling, and the only sequel I can think of that actually improved its predecessor and may have retroactively boosted a dandy popular gangster movie to "masterpiece" status... without, of course, changing a frame of the first movie. (Then Coppola temporarily destroyed them both by stretching them out into a chronologically linear soap opera for TV in 1977.) Remember, too, that Coppola had only made a handful of films when this was written: "Dementia 13," "You're A Big Boy Now," "Finian's Rainbow," "The Rain People"... (Jameson quite liked "The Cotton Club" a few years later.)

I do think there's some brilliant stuff in "The Conversation" (including one of the all-time great plumbing scenes, and a blood-on-window shot that's more potent and shocking than the celebrated one from DePalma's "Scarface" years later), but even though it's my favorite Coppola after "Godfather II," made the same year, it does feel like a slightly formal, over-polished essay. But that kind of fits its central character. I'm still arguing with myself about how much I think it cheats at the end.

Back to Jameson and Coppola:

A lot of people who can see the problem with the film's scenario logic and characterizations nevertheless manage to come out cheering because of the "visual power." May I propose that "visual" is the most abused term in the filmcrit lexicon? It is not enough for a film to be full of moving subjects and moving camera, flaring lights and inky shadows, towering compositions and tricky dissolves. That can add up to arrant pictorialism, a miscellaneous lightshow, or meretricious folderol. It isn't "visual" unless it's informed by an organic intelligence. There is organization in Coppola's film, but organicity it's not. His motifs don't grow--they merely recur. His images, even when technically impressive, don't reverberate with possibility--they freeze up with literalness. They don't suggest--they denote.

I feel like an Isely Brother reading that. It makes me want to shout with joy because it captures the essential movieness of movies more acutely than all but the liveliest examples of the liveliest art.

One more quotation -- there's lots more where this came from -- just because this is so good I want to gobble it up:

[...] "Apocalypse Now" is nothing if not an attempt to make a serious and important work of art. One must admire Coppola's crazy courage in laying fortune, career, even his home on the line to get the film made. And if he reached beyond his range as an artist, well, that is an honorable failing. But one thing is unforgivable. Francis Coppola based his film on Joseph Conrad's "Heart of Darkness"; he even went back to Conrad to restore material omitted from that first John Milius screenplay. Almost everything that is any good in the film, that has lasting power to disturb, is based on Conrad's original vision. A seaman from the Polish Ukraine, who learned to use the English language with a majesty and subtlety few have equaled, created one of the definitive works of--and on--the Western imagination. There are no credits on Coppola's film, but the programme book has columns of them. Joseph Conrad's name is never mentioned....

(Oh, and you say you haven't read Jameson's Movietone News masterpiece about Robert Altman's masterpiece, "Nashville"? Well, go on, it's right here, too. Feel free to lick your plate when you're done....)

And now, just for the hell of it, a self-indulgent flashback about me:

I wish I could recapture for you the fevered atmosphere surrounding the release of "Apocalypse Now" in 1979, after years of horror stories from the set and the editing room, and the "work-in-progress" screening at Cannes, where Coppola proclaimed that his movie wasn't about Vietnam, it was Vietnam. (This is chronicled in Fax Bahr, George Hickenlooper and Eleanor Coppola's "Hearts of Darkness: A Filmmaker's Apocalypse" -- a much better, richer film than Coppola's, just as Les Blank's "Burden of Dreams," about the making of Werner Herzog's "Fitzcarraldo," turns out to be the film Herzog's should have been).

I was 21 at the time and had written my first movie review for my college newspaper, The University of Washington Daily, less than two years before. (It was of "Annie Hall.") I wanted this movie to be great -- everything I imagined it could be. As we were leaving the exclusive, event-style press screening, a friend asked me if I thought it would be considered one of the great movies ever. I said I didn't know. But I wrote about it as if I did. (I wasn't as judicious as Jameson.) I wrote about the first part of the movie (I've always thought it deflates completely once Brando appears), about the excitement I felt, about the "importance" I felt (this experience came to mind when I saw the responses to "The Dark Knight" this summer), and I think I talked myself into believing against belief that it was some kind of masterpiece. I remember somebody seeking me out to talk about the movie, and we discussed it in reverent, impassioned tones... and then it sunk in that he hadn't seen the movie. Of course, he couldn't have -- it hadn't come out yet. He just wanted me to help pump him up for the experience, and I was more than willing to field his eager, awestruck questions.

I know, I was a total doofus.

Later, I ate my printed words. In print, too. I went back to see "Apocalypse Now" again and saw not the movie I had wanted to see, but the movie I already knew I'd seen the first time but hadn't wanted to admit it. So I came clean and wrote about that one. Every few years I still think I must have been wrong because, you know, everybody thinks it's great and all, so I watch it again and I'm always disappointed again. (I've had the same recurring letdown with "Blade Runner" in its endless incarnations. At some point I think it got somewhat better, but I'm no longer sure when or how or how much.)