Angelina Jolie: "We didn't need dialogue. We had faces!"

The reviews of "Salt," re-teaming Angelina Jolie with director Phillip Noyce, fell into two distinct camps: those that treated it as an action/espionage thriller, and those that saw it as something rarer: an old-fashioned star vehicle. Of course it's both, but (as I said in my second paragraph) I think it's even more fascinating as an examination and appreciation of Jolie's persona, on- and off-screen.

Kathleen Murphy observed that Noyce "has turned 'Salt' into a movie about being a movie star, about gorgeous Angelina Jolie dressing up and down, working up a sweat, displaying her exotic self for our voyeuristic pleasure...."

Undercover, the star becomes even more of a fantasy figure, a little bit Natasha of Bullwinkle fame, a little bit Morticia Addams, a little bit Bettie Page, with a soupçon of gaunt-cheeked fashion mannequin thrown in for good measure. That this dreamboat could stand in a subway or move through a crowd without causing anyone's head to turn -- or explode -- is part of the unapologetic nutsiness of 'Salt's' anti-reality.

Walking away from yet another over-the-top pursuit, our bat out of hell casually boosts a fur hat -- and moments later, Salt's swathed in a Vogue-style outfit trimmed in the same fur, action figure become high-fashion model. How? Irrelevant; it's magic. Not much later, Jolie regally walks a runway -- on a derelict East River barge -- in slow motion, gracefully lofting grenades left and right, death with a Mona Lisa smile.

Noyce knows there's nothing as potent as Jolie's face, which can turn in an instant from open and tremulous to hard and mocking. We never stop trying to read it. This isn't a high-camp performance, like her insouciant Lara Croft. Salt is drawn and stricken, emotionally off balance at her most physically poised. We don't know what the hell she's up to, but we root for her. After a shocking act of violence, James Newton Howard's music goes from plaintive to syncopated, and a female choir begins to chant. It sounded to me like "Salt! Salt! Salt! Salt!" That's what I wanted it to be, anyway. Because I wanted to sing along.

And Charles Taylor has a magnificent essay at IFC.com ("Deconstructing Angelina Jolie"), in which he writes that the film cannily exploits "the public's distrust of Jolie" in getting us to question whether her Evelyn Salt is a CIA agent or a Soviet mole:

The question of Salt's allegiance is finally answered, but Noyce's masterstroke is that he makes the answer irrelevant to the pleasure of watching the splendor of Jolie in her full leonine regality.

Taylor ranks Jolie as "the most commanding star presence in the movies right now" -- and makes a mighty fine case for why that is:

If we discuss her in terms of presence, it's because, with occasional exceptions like the unsatisfying "A Mighty Heart," Angelina Jolie seems not so much interested in acting on screen as being. You could argue that too many lousy pictures like "Wanted" or "Gone In 60 Seconds" or "Beowulf" have diminished her reputation -- until you remember that even in the days of "Gia," "Playing By Heart," "George Wallace" and "Girl, Interrupted" it was easier to get people to discuss her as a tabloid freak than to take her seriously as an actress. That's nothing new. It's always harder to convince people that a beautiful woman can act.

As much as we might wish to see Jolie get to do something more than action movies, even one as good as "Salt," you have to wonder if perhaps she's become too powerful a presence to be cast in everyday roles. Once we could accept movie goddesses as part of the power and beauty of cinema. You didn't expect to encounter a creature like Ava Gardner or Elizabeth Taylor in real life, but they seemed right at home on-screen, a world scaled to the enormity of their presence. It's harder for us to accept the existence of such creatures in a time when empty irony rules and the governing ethos is the cultural fragmentation and segregation of the digital age.

Her statuesque appearance, shrouded in fur, on the Staten Island Ferry, reminded me of other iconic movie star moments: Greta Garbo on the prow of a ship in "Queen Christina"; Marlene Dietrich as the fur-and-feather clad Catherine the Great in "The Scarlet Empress"; Ingrid Bergman as the undercover operative in "Notorious"... But you get the idea. 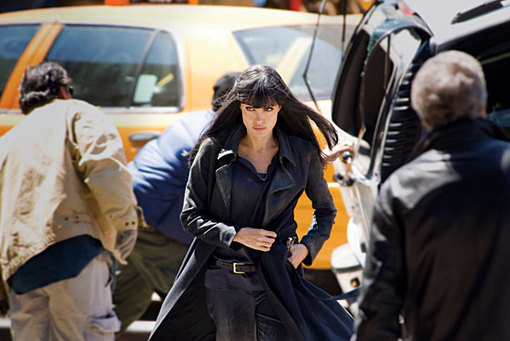 Because Jolie's Salt is alone and inscrutable for most of the movie, Taylor says, the star "Jolie can stride through the movie with no allegiance, except to the camera regarding her":

It's not simply that "Salt" gets us on Jolie's side. It's that by forging our allegiance to Salt and keeping it firm no matter what side she appears to be on, Noyce affirms the truest values of movies: beauty, style, charisma. If virtue was what we craved from movies, then the heroine of "Gone With the Wind" would be Olivia De Havilland. When, in "Salt," Jolie starts roughing up cops and Secret Service agents, it takes us a few beats to ask why she's doing it. The truth is, at first, we really don't care. All we know is that they're somehow in the way of the person we're there to bask in, and we just want to watch her stride and fight, and to look at that extraordinary face, some more.

Damn if that doesn't aptly recall the famous words of a luminescent lady of the silver screen, Norma Desmond: "We didn't need dialogue. We had faces!"