The height of visual extravagance

"It is a relentless excursion into style," Josef von Sternberg said of his "The Scarlet Empress" (1934). That's putting it mildly. Here is a film so crammed with style, so surrounded by it and weighted down with it, that the actors peer out from the display like children in a toy store. The film tells the story of Catherine the Great as a bizarre visual extravaganza, combining twisted sexuality and bold bawdy humor as if Mel Brooks had collaborated with the Marquis de Sade.

The movie was released in 1934, just as the Hays Office began to police Hollywood films for morals violations. Von Sternberg must have had a friend on the force; he gets away with murder. Although the movie wisely sidesteps the famous legend of the empress' sub-equestrian death, a title does inform us, in sublime understatement, "Catherine coolly added the army to her list of conquests."

We see her inspecting the troops with particular attention to their nether regions, and when she meets the handsome Captain Orloff she says she's "heard" of him and asks what his job is. "I'm in charge of the night watch, your majesty." Dietrich's reply is a sensuous purr: "It must be ... cold ... at night ..." To be sure we get the point, we see Peter playing with toy soldiers, and then it's observed of Catherine, "she's always picking up the archduke's soldiers."

Von Sternberg (1894-1969) was one of the true Hollywood characters, sometimes a great director, always a great show. He dressed in costumes appropriate to the films he was directing, made his assistants remove their wristwatches because he could hear the ticking, and calmly claimed he did it all himself: direction, photography, lighting, sets, costumes, props, the works. "It takes me a lot of time," he sighed. Of course he had the usual craft professionals assigned to all of those jobs, but he certainly controlled the look of his films, and in "The Scarlet Empress" he compensates for the lack of a vast canvas by filling a small one to bursting.

His interiors suggest the Russian imperial household without showing us much more than a throne, some corridors, a dining room, a grand staircase and some bedrooms. We're reminded of how Orson Welles created Kane's Xanadu out of shadows, props, tricks and mirrors. The fixtures in Sternberg's rooms are boldly overscale; rough stone sculptures of monstrous gargoyles tower over the characters, surround them, leer at them. The doors are so heavy it takes two men or six women to swing them open. And the fur costumes of the wicked Count Alexei (John Lodge) look so heavy, it's a good thing he's over 6 feet tall and strong enough to wear them.

Alexei is the one who journeys to the hinterlands to fetch the beautiful "young princess," then called Sofia Frederica, who has been commanded to become Peter's bride. Sofia has already had quite a childhood; her doctor was also the hangman, and her bedtime stories involved tortures of the rack and the stake. In a montage imagining these grisly agonies, a prisoner is hung upside down and used as the clapper for a bell, and that image dissolves into Sofia swinging back and forth at play. No sooner do Alexei and Sofia meet than she looks at him with long fascination, in a closeup where she takes forever to close a door. The next day, Alexei boldly kisses her. "Why did you do that?" she asks. "Because I've fallen in love with you, and now you must punish me," he says, promptly handing her a whip as if the kiss was the price he had to pay for his reward. Later, on their long journey to the palace, her mother sees them together at a roadside inn, Sofia again holding his whip. "What are you two doing down there?" she asks. "Never mind; I don't want to know."

Arriving at the court, Sofia and her mother are greeted by Empress Elizabeth (Louise Dressler, with a no-nonsense Midwestern American accent). A court doctor immediately plunges under her hoop skirt to make sure all is in order for a royal pregnancy. Elizabeth renames her Catherine, "a good Russian name," and awards her the Order of St. Catherine: "May you wear it in good health. And be careful it doesn't scratch you."

Soon her betrothed Peter the Great (Sam Jaffe) enters, a grinning, simpering simpleton dismissed by his mother as a "half-wit." His principal royal duty is to produce an heir, something he is apparently unequipped to do, as von Sternberg hints in a scene where Peter is so desperate for a glimpse of his wife that he drills a spy hole through the eye of a mosaic in his mother's bedroom, which I think is a Freudian trifecta.

Dietrich exists surrounded but untouched by this madness, as a locus of carnal insinuations. She rarely engages the other actors physically; von Sternberg likes to isolate her in fetishistic compositions of lace, feathers, fur and fire (notice the shot in which she gazes steadily at Alexei from behind her veil; the candle flame a few inches from her mouth trembles as she begins to breathe more heavily). One dress seems made of black-tipped white fur spikes, which undulate when she moves, like a dreamy underwater porcupine. There is something both contented and demented in her narcissism; perfectly made up and exquisitely lighted, she poses for us in von Sternberg's closeups, regarding us with contemptuous passivity while we commit sins of thought by contemplating sins of deed.

Some of her erotic moments are more than passing strange. She and Alexei find themselves in a stable, where she plunges into the hay, then rights herself and puts a straw in her mouth sideways. He takes it away. She puts another straw in her mouth sideways. He also takes that away. She goes through five sideways straws and five Alexei removals. I have no idea what obscure communication is taking place here, but there's a payoff later in the film when, to taunt him, she boldly inserts a straw in her mouth not sideways but stem first, and twirls it with her tongue. Yowza!

Von Sternberg has a slapdash way with some scenes, as if impatient when his attention is called away from Dietrich. Notice his several crowd scenes, in which peasants materialize on demand, mill about in frenzied turmoil, and are then forgotten. There is almost no sense of a real society outside the palace walls, and little enough within, where some of the arrangements would be at home in a Marx Brothers movie. For the long winter journey to the palace, for example, Count Alexei supplies piles of furs for Catherine, and then dismisses her mother with a hot water bottle.

When Dietrich is onscreen, however, nothing is too good for her; not only do von Sternberg's lighting and cinematography make her the center and subject of every scene, but he devises extraordinary moments for as, as when, clad in a fur uniform and cape, with an improbable sable military hat, she mounts a horse and leads a cavalry charge up the grand staircase. "It took more than one man to change my name to Shanghai Lily," she says in "Shanghai Express," but it only took von Sternberg to make her Marlene Dietrich. 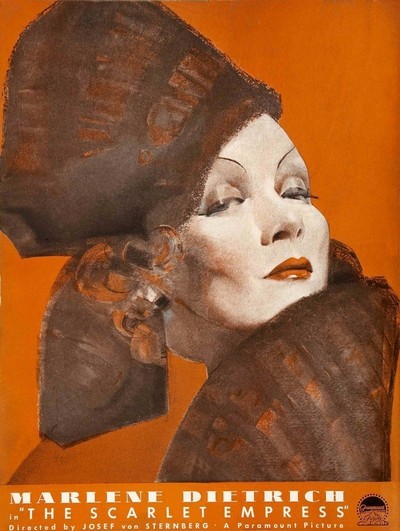